Most voters haven’t even heard of Charles and David Koch, the libertarian philanthropists that Senate Majority Leader Harry Reid (D., Nev.) has called "un-American" and "against everything that’s good for America."

That’s bad news for Reid, who is determined to make bashing the Koch brothers a key plank in the Democratic platform. Even worse, voters have a more negative opinion of Reid than they do of the Kochs. The Daily Caller reports:

Senate majority leader Harry Reid, desperately trying to create a conservative bogeyman for the 2014 election cycle, often takes to the Senate floor to lambast the billionaire Koch Brothers for their political contributions to conservative groups.

But a George Washington University Battleground poll released Tuesday indicates that more people have an unfavorable impression of the Nevada lawmaker than the Kochs. Thirty-five percent of those polled say they have a negative impression of Reid, compared to 25 percent for the Kochs. 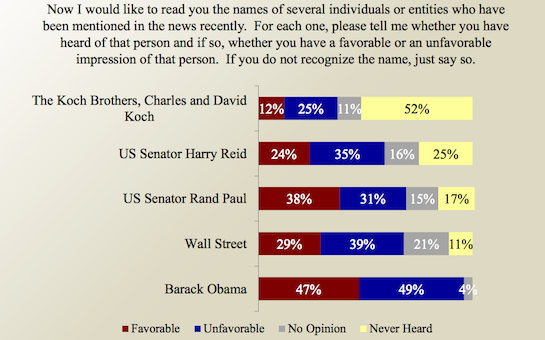