What one clearly sees in this video is that Hillary Clinton makes no effort whatsoever to actually "dodge" the shoe. Rather, she flinches after it has gone whizzing by her head. A far more accurate headline would've been "Hillary Clinton Luckily Unharmed by Her Slow Reflexes." Typical liberal media, covering up the truth for their favored candidates.

If you want to see someone dodge a shoe, check out Dubya:

In this one fleeting moment, you can see a clear difference between Hillary and W. Whereas Hillary reacts well after the danger has passed, George W. Bush preemptively sees danger coming and positions himself to avoid it. He ducks under the first shoe and then watches the second sail harmlessly over his head. Always cool under fire, Dubya smiles and waves off assistance from the Secret Service: 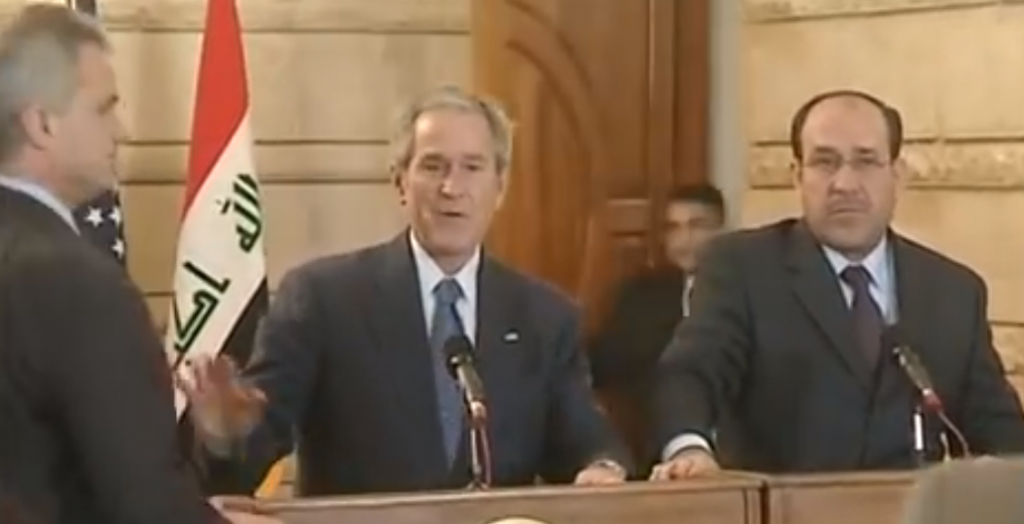 Contrast Dubya's suave reaction to Hillary, who, confused and unsure of herself, starts muttering about bats.

I hope our Greatest Living President is enjoying his retirement. But it's at times like these that I really miss his steady hand on the till, you know?

UPDATE: A friend sends along this link from the New York Times, in which we learn that the president of the United States being assaulted on foreign soil is a teachable moment about how terrible he is. One wonders if they'll offer the same kind of pronouncements following Hillary's close call. Doubtful. Typical liberal media.