A mere 19 days after the shooting death of Michael Brown (and subsequent unrest) in Ferguson, Mo., Hillary Clinton has decided to weigh in, something liberal pundits have been urging her to do for some time. In other words, Clinton’s political team has finally concluded its focus group on the issue.

Hillary Clinton offers a statement on Michael Brown and Ferguson. 19 days later. Next she'll offer her thoughts on Rodney King and Vietnam.

Clinton took a brave stance against tragedy, offering bold declarations, such as: "Nobody wants to see our streets look like a war zone, not in America." The timing of the remarks—just as the media was beginning to acknowledge the Russian invasion of Ukraine—was interesting, as was the venue.

"I would have commented right away on Ferguson, but I wanted to wait for the right venue, which, obviously, was the Nexenta OpenSDx Summit." — Jon Ralston (@RalstonReports) August 28, 2014

Ah, yes, the OpenSDx Summit, hosted by Nextenta, a company that describes itself as the "global leader of Software Defined Storage solutions." Clinton was the keynote speaker at the invitation-only event, which took place at the St. Regis Hotel in San Francisco, and presumably took home her standard fee of $250,000. (Context: the St. Regis typically serves very expensive cocktails.) 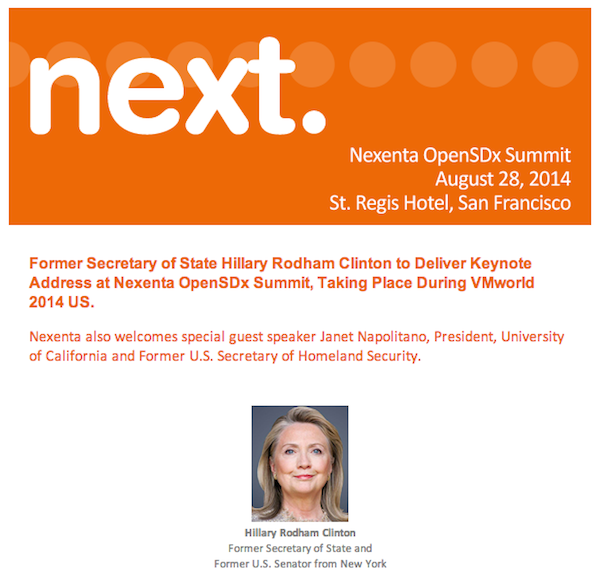 The conference was billed as "a full day of thought-provoking sessions and discussions—combined with stellar networking opportunities." Event organizers promised "a unique, collaborative and fast-paced day of focused discussion on today’s leading technology trends ... OpenSDx will change the face of the world you know today."

In other words, the perfect venue to announce your poll-tested opinion on the nearly three-week-old shooting death of a teenager.