The only correct ranking of Star Wars films

Apparently today is something called "Star Wars Day." I don't have any patience for fake holidays or other marketing campaigns, and I am certainly not a nerd excited to take advantage of special merchandise discounts. The only reason I'm weighing in is to correct the glaring and ludicrous errors of others. Here is—most of—the extant Star Wars corpus ranked from worst to best.

7. Attack of the Clones*

This was a very tough call. Deciding which of the prequel films represents the absolute nadir of Star Wars is ultimately going to come down to deciding whether have you think this film or its sequel is worse. As I say, it's a tough one. Is "I don't like sand" worse than "Hold on to me, Anakin, like you did by the lake on Naboo"? Is that stupid CGI lizard thing in the colosseum worse than Ewan McGregor riding another stupid lizard thing in some kind of weird pit? (You can probably tell I've only seen these movies once.) Ultimately I award the prize to Clones for featuring what must be the worst romance of any major Hollywood production I have ever seen—and for ruining the so-called "Clone Wars" alluded to by Princess Leia in A New Hope. Who knew that when Sir Alec spoke with that quiet soul-stirring awe of fighting in "some damn fool idealistic crusade" all those years ago, what he really meant was this:

6. Revenge of the Sith

It's very easy to misspell "Sith." I don't know the plot of this film, but I do remember that in the beginning there is a space battle with 600,000 fake-looking gray pods and robots and lasers in the frame all at once. Later, I guess, there is some kind of rescue? Before the end Obi-Wan Kenobi rides a dinosaur and throws a man into a volcano ("How rude," to quote a character in a much better Star Wars film). It is all very confusing and very ugly. Why is it better than Clones? Because it doesn't have a '50s diner scene. One thing it is not better than is Return of the Jedi. For some reason this became a talking point years ago among optimists who couldn't admit that Lucas—whose marketing people, I believe, must have been the source of it—struck out with the prequel trilogy.

This film is distinctly better than its two successors. This is not saying much. It is still a very subpar adventure film. Pod-racing is not "fun the first five times"; Darth** Maul, so far from being "cool," is, in fact, lame. There is no place for karate in a Star Wars film. But at least Yoda—in the theatrical version I saw when I was eight, anyway: I can't speak to the DVDs—was an actual puppet. Menace also has a plot that I can sort of understand. The emphasis there should be on "sort of": I still don't know if Keira Knightley or Natalie Portman was the real queen. 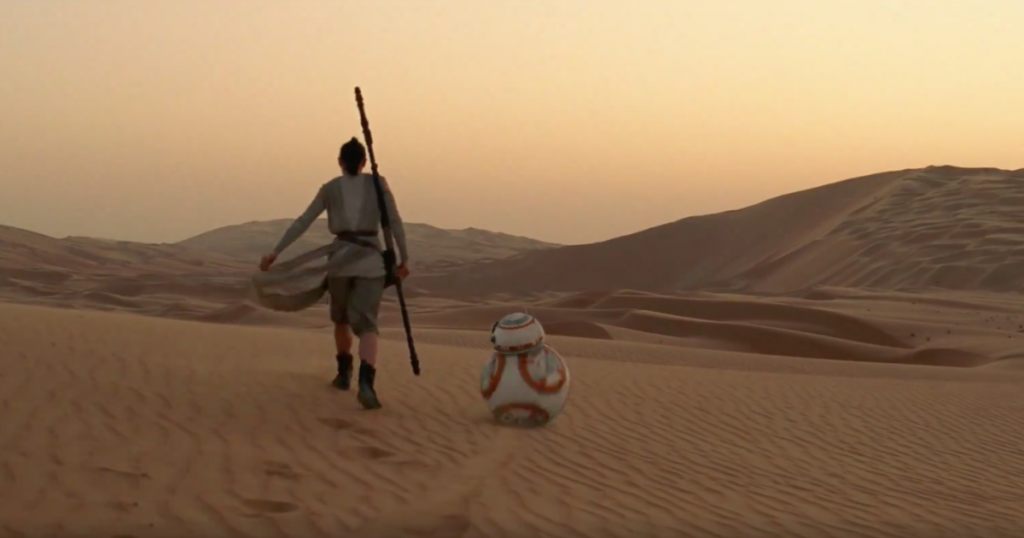 No, you dorks, this amusing homage to A New Hope is not "better" than Return of the Jedi any more than Revenge was. It is better than the prequels on the whole, but it still has some fairly low points: the Maz Kanata (thank you, Wookiepedia.com, for showing me how to spell that) scene is as ugly as anything in the prequels; the scene where that eyeball beast chases our heroes around Han Solo's ship is ludicrous and tonally incompatible with the rest of the film. But the casting is first rate. The dialogue is snappy. I think that Kylo Ren is meant to be a sort of stand-in for Star Wars‘s man-child fans of my generation, people who saw the films in their original version on VHS before the theatrical re-release, who have grown up worshipping an image of something out of the past. The campaign for a proper release of the unaltered original trilogy is, indeed, a kind of Jacobitism, and Max von Sydow steals the film in its first few minutes when he insists that Leia "will always be royalty to me"—thus reminding us that the conflict between the Rebel Alliance and the Empire was one between traditionalists and vile technocrats.

3. Return of the Jedi

People love to dump on Jedi, which was my favorite of the films when I was a child, but the scenes featuring Luke, Vader, and the Emperor alone in the throne room of the Death Star are perhaps the best in the trilogy. Vader's beautiful deathbed reversion to the true Faith is worthy of the old Brideshead Revisited miniseries. Some Ewok-related goofing aside, the argument that the film represents a marked shift in tone from Empire doesn't hold up. The dialogue is funny, the action is great; there is peril and romance; there are disgusting, entirely believable monsters on strange worlds; there are characters we love to watch. It's classic Star Wars.

2. The Empire Strikes Back

I have curiously little to say about this film. It is the one that is usually, indeed almost universally awarded the laurels by serious critics and fans alike. I take issue with this, for reasons I will explain below. And I do think that for many children it is probably the least appealing of the three, in part because they identify more with Luke than with Han. Otherwise, though, I have nothing to say against it. It is hard to think of a single area in which this film is not a consummate masterpiece. I do wish more people would talk about the fact that Han's name is pronounced two different ways. It's one of those jolly little details that remind you what a fun, ramshackle, handmade sort of film this is. I also find it astonishing that Lucas did not at some point feel compelled to go back and dub over for consistency. How I miss the original spooky female Emperor:

Putting this at number-one is not a slight against Empire, a film I have loved and quoted since I was five years old. But this list is about redressing balances. If you care about the essence of Star Wars—action, wanderlust, yearning, whimsy, humor, romance, the chiaroscuro of desert sands shining out against the darkness of monolithic spaceships, the turquoise glint of a blade, charming British accents, fantastical puppets—you will find it more perfectly distilled here than anywhere else. Here is Kurosawa and John Ford, The Battle of Britain and Flash Gordon, Casablanca and Disney's Treasure Island; it is the first and last Wagnerian western, the only samurai Grail Quest film, the best science fiction film ever made not least because science is never allowed to intrude upon the proceedings. It is also one of the most indelibly American of movies, something I think only foreign critics have really understood.

Anyway, as an adventure picture, it is perfect. It is also perfectly self contained. It is curious how little it would matter if Empire and Jedi had never been made. It would stand alone as a classic. Would it alter the way we think of Star Wars? Of course. There are no elaborate lightsaber battles. Darth Vader is a less important character than Peter Cushing's delightfully evil Grand Moff Tarkin. The costumes look very slapdash at times. James Earl Jones can't make up his mind what sort of accent he wants to do (when he says "plans" with a short a, he sounds like a Scot; later in the trilogy he will fail to make up his mind if Vader's voice is supposed to be rhotic or non-rhotic). Carrie Fisher goes back and forth between her very sloppy attempt at a kind of Received Pronunciation and her normal voice in the space of less than a minute ("Gov-uh-nuh Taah-kin…But Alderaan is peaceful! We have no weapons"). It's a delightful mess and a film I can't wait to share with my children in a few years.

*Yes, only seven on this list. I haven't seen Rogue One and probably never will.

**Since when did "Darth" become a title, like "Sir"? What is his first name? Is his real surname "Maul"? Did he also fall in lava at some point, or is he a member of some unfortunate red-faced many-horned species whose appearance screams "I'm a BAD GUY!"? Surely there must be many millions like him who are bakers and librarians and other perfectly ordinary sensible things.

*** We actually call this film "Star Wars" chez Walther, not so much because that's what it was called before 1980, but rather in acknowledgment of its containing the germ of everything one loves about the series.