Georgia-based activist Nabilah Islam, who unsuccessfully ran for Congress with the support of liberal "Squad" members Alexandria Ocasio-Cortez (D., N.Y.) and Ilhan Omar (D., Minn.), formed a super PAC in the immediate aftermath of the November election. She has pledged to spend millions to help Democrats win the state's closely watched January runoffs. The super PAC is Islam's most ambitious electoral undertaking since her failed congressional campaign, which centered on support for far-left proposals such as defunding police and implementing the Green New Deal.

Tens of millions of dollars in outside money are expected to flood Georgia as Democrats look to gain control of the Senate by unseating Republican senators David Perdue and Kelly Loeffler. While Ossoff and Warnock have attempted to distance themselves from the far-left policies backed by Islam, the Democrats have leaned on the party's progressive wing to raise money. The pair courted progressive Silicon Valley donors during a November 9 virtual fundraiser. Sen. Bernie Sanders (I., Vt.) said that winning the races would allow Democrats to "put forth a progressive agenda" that includes "a Green New Deal" in a recent fundraising email.

Islam most recently ran to represent Georgia's Seventh Congressional District. She backed a number of far-left policies during the race, including defunding the police, Medicare for All, and the Green New Deal. Ocasio-Cortez praised Islam for not being "afraid to fight against the status quo," and the New York Democrat's Courage to Change PAC gave Islam $5,000 in May. She received just 12 percent of the vote in Georgia's June Democratic primary.

Islam has criticized Loeffler's "law and order" rhetoric, accusing the Republican of "encouraging violence." She publicly backed defunding police in a June interview with the Atlanta-based NRI Pulse.

"I believe that we need to defund the police and divest that money towards racial bias training, de-escalation training, and not just one time, but an ongoing training program," Islam said.

Islam registered the Save our Senate PAC with the Federal Elections Commission on November 6. Along with cofounder and Gwinnett County Democratic chairwoman Bianca Keaton, the progressive activist told the Georgia Recorder that the group will spend "seven figures" to rally Georgia voters behind Ossoff and Warnock.

Save our Senate PAC could not be reached for comment using the information provided in its Federal Elections Commission filing. Islam did not immediately return a request for comment.

Omar Backs Warnock: ‘Nobody Can Serve God and the Military’ 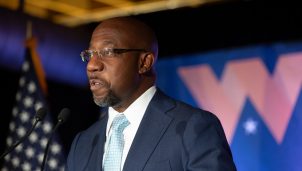 Warnock: ‘Nobody Can Serve God and the Military’