Big-spending outside groups have rushed to boost Iowa Democrat Theresa Greenfield ahead of Tuesday's Senate primary as the establishment-backed businesswoman struggles to put the race away.

Endorsed by the Democratic Senatorial Campaign Committee (DSCC) in June 2019, Greenfield was expected to coast to victory in a race that includes little-known progressives Eddie Mauro and Kimberly Graham. But a fourth candidate, retired Navy admiral Michael Franken, has gained momentum in recent weeks, earning the endorsement of the Des Moines Register on May 10.

Following the newspaper's endorsement, pro-choice PAC EMILY's List dropped more than $900,000 on a television ad accusing Franken of carpetbagging. Franken was born and raised in Sioux County, Iowa, but left for the University of Nebraska in 1978 on an ROTC scholarship. He served in the military for 39 years before retiring in 2017 and returning to Iowa two years later. Greenfield, who was born across the Iowa border in Bricelyn, Minn., and graduated from Minnesota State University Mankato, has not taken Franken's call to denounce the ad, which drew condemnations from Rep. Elissa Slotkin (D., Mich.) and former Obama secretary of defense Chuck Hagel, who called it "deplorable."

Greenfield did not respond to a request for comment.

EMILY's List is not the only outside group spending big to boost Greenfield. Senate Majority PAC, an organization aligned with Senate Minority Leader Chuck Schumer (D., N.Y.) and the DSCC, has spent nearly $7 million supporting the Iowa businesswoman as she vies for the nomination to take on Sen. Joni Ernst (R., Iowa). Greenfield's campaign has spent an additional $2.3 million on the primary, with large fundraising hauls driven by endorsements from prominent national progressives, including Sen. Elizabeth Warren (D., Mass.). Franken has spent just $740,000 as of May 13. In a race with little name recognition across the board—73 percent of Iowans had no opinion of both Greenfield and Franken in a March Des Moines Register poll—the massive spending advantage was expected to guarantee a large margin of victory for Greenfield on Tuesday.

"It's quite clear that Greenfield is, by definition, seen as the establishment choice. There's a Biden-esque or even Clinton-esque kind of feel to her campaign," Iowa State University political science department chair Mack Shelley told the Washington Free Beacon. "The DSCC has been very straightforward that she's the chosen one."

But the Register‘s coveted endorsement of Franken, combined with a series of shaky debate performances by Greenfield, has led to the last-minute scramble from EMILY's List to push the candidate over the line. The decision to attack Franken instead of highlighting Greenfield suggests genuine concern. Should Greenfield fail to garner at least 35 percent support on Tuesday, the race will go to a nominating convention, and such a result could have major implications on the Senate majority in November. It would solidify concerns that the DSCC became involved in the race too early, exposing Greenfield as an anointed candidate who may struggle to attract swing voters in a state President Donald Trump won by nearly 10 points in 2016.

The Iowa Democratic Party has floundered in recent months after the state's disastrous presidential caucuses in February, which led to the resignation of former chairman Troy Price. The party has also fractured somewhat over the DSCC's handling of the Senate primary. Graham pushed back following the group's endorsement of Greenfield, saying, "It's important in a democracy—if we're going to try to say we have one—to at least speak to or return the calls of the other candidates that are other Democrats in that primary." Eddie Mauro also slammed "D.C. insiders and the D.C. establishment" after the endorsement. Mack Shelley said there were "echoes" of hostility toward the party among progressives due to the DSCC's early endorsement.

"Graham is not exactly [Senator Bernie] Sanders, but she's trying to appeal to that wing of the party," he told the Free Beacon. "I don't think she has a realistic chance, but she provides opportunity for someone to decide, ‘I don't know who to vote for, but the party establishment already screwed Bernie over twice, so why should I support their candidate?'"

Self-described as "not a policy wonk," Greenfield has faced criticism for avoiding campaign events and limiting press access both before and after the coronavirus pandemic. The Iowa GOP highlighted her campaign's repeated removal of cameras from grassroots events in October 2019. The candidate also skipped multiple virtual forums attended by the other three candidates in April.

Greenfield's gaffes on the campaign trail could explain her hesitancy to go on record. After calling GOP incumbent senator Joni Ernst a "socialist" during an October 2019 campaign forum, Greenfield stumbled through three primary debates held in May. She refused to take a position on decriminalizing illegal border crossings, saying, "We need to address issues like that." She was also criticized by all three primary competitors over campaign finance hypocrisy—while Greenfield often claims she is not accepting "one dime in corporate PAC money," the outside groups supporting her are bankrolled in part by corporate PACs and dark money groups.

"You can't smile at people and tell them you're not taking corporate PAC money when you're taking tens of thousands of dollars of corporate PAC money, leadership PAC money that's full of pharmaceutical money, fossil fuel money, and Wall Street money," Mauro said. "She says she wants to end corruption, but she's taking corrupt money, so there's an issue there."

Greenfield dismissed the attacks as "Republican talking points" and claimed she couldn't disassociate from the groups because she doesn't "even know who they are" and "wouldn't even know who to call." She has repeatedly touted the endorsement of EMILY's List during her campaign.

Greenfield has also come under fire for her business dealings. As president of a Des Moines-based real estate firm, Greenfield led a 2015 project that "blindsided" a city shopping center's local tenants. Her proposal would have made German grocer Aldi the fourth big-box retailer within less than one mile, driving out local businesses in the process. Though the proposal was unanimously killed by Windsor Heights city council, Greenfield moved forward with renovations that priced out at least five small businesses and shut down one permanently.

Following a Free Beacon report on the project, Mauro released a TV ad in May questioning Greenfield's leadership, saying Greenfield "kicked small business out to make room for out-of-state companies."

Greenfield's primary woes come after the DSCC reportedly struggled to recruit a candidate to run against Ernst. According to Iowa Starting Line, Schumer's first choice was former Iowa governor Tom Vilsack, with freshman congresswoman Cindy Axne (D., Iowa) a "close second." It was only after the pair of Democrats turned down the bid that the Senate minority leader pivoted to Greenfield, whose ballot application for Iowa's Third Congressional District was withdrawn in 2018 after her campaign manager admitted to falsifying signatures. Axne went on to win the primary and defeated then-representative David Young (R.) by 2 points.

The DSCC did not respond to a request for comment.

While Greenfield is still expected to win Tuesday's primary, a nominating convention would spell an embarrassing result for national party leaders. A survey of 849 Iowa Democrats conducted by Public Policy Polling showed Greenfield leading the race with 43 percent support to Franken's 12 percent. But the poll was conducted from May 5-6, weeks before the primary debates and Mauro's ad attacking Greenfield. Shelley said that while he would be "surprised" to see Greenfield fall below the 35 percent threshold, he was "personally impressed" with Franken's performance on the campaign trail.

"It seems unlikely that Greenfield is going to end up in a scramble," he said. "But she may come out of this a bit more bruised than the party establishment would like."

Should the primary go to a nominating convention, party leaders would be expected—but not required—to select the race's top vote-getter. The state party's convention is scheduled to take place June 13 regardless of the primary's results, potentially giving Ernst additional time to campaign for the general election while her Democratic challengers look to sway party insiders.

The eventual nominee will face the Iowa Republican in November. 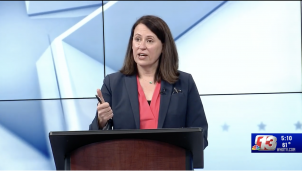