Republican efforts to highlight Joe Biden's lurch left during the Democratic primary are beginning to take form now that he's all but clinched the nomination.

America Rising, a conservative opposition research and communications firm, began rolling out new material focusing on the fact that Biden's policy positions are indistinguishable on major issues from his last remaining primary opponent, Sen. Bernie Sanders (I., Vt.). A new 2020 Democratic Primary Quiz released by the group asks respondents to match candidates with far-left policy positions, and in a majority of the 10 questions, both Biden and Sanders share the same policy.

Both candidates, for example, support providing illegal immigrants with taxpayer-funded health care, free college tuition, freezing the deportation of illegal immigrants, and a national gun-owner registry, the group shows in the quiz. 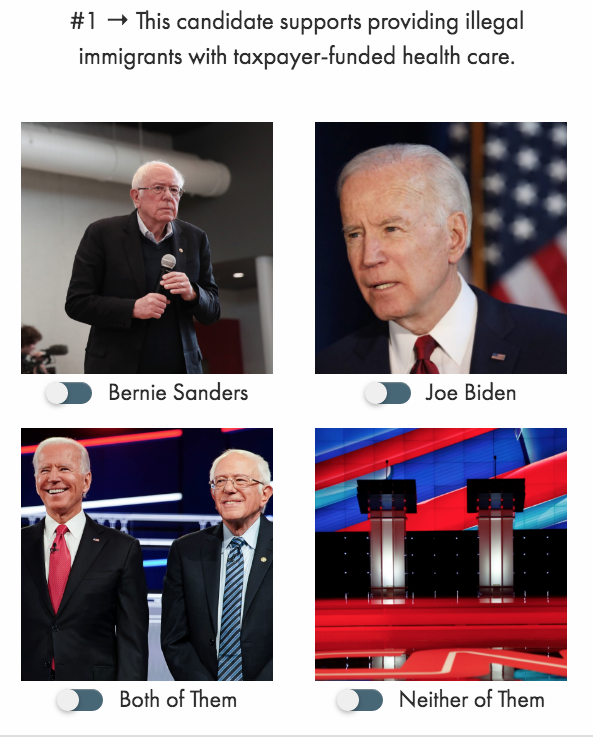 America Rising said its aim is to illustrate the fact that Biden, in his thus far successful effort to rally the Democratic presidential field together against Sanders, has adopted many of Sanders's most radical views.

"Joe Biden has lurched to the left, and at this rate his agenda will be virtually indistinguishable from Bernie Sanders’s by the time Democrats crown him as their party’s nominee in Milwaukee," said Chris Martin, America Rising's communications director.

Though Biden has been portrayed as a moderate, he's moved to the left on a number of major policy issues, including most recently on college tuition. Ahead of last Sunday's debate against Sanders, Biden unveiled a new plan that would make public colleges and universities free for families earning less than $125,000 a year.

After a Thursday morning announcement that Rep. Tulsi Gabbard (D., Hawaii) ended her campaign, the primary field is officially down to just Biden and Sanders, who has resisted calls from inside the party for him to drop out of the race.