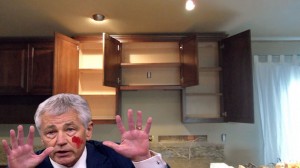 U.S. Secretary of Defense Chuck Hagel lost his battle with a kitchen cabinet earlier this week, and suffered a significant face wound in the process. 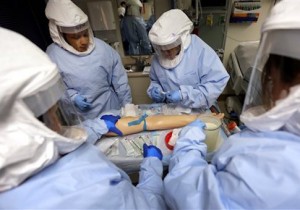 The Pentagon announced Wednesday that “all U.S. military service members” returning from Ebola plagued countries in West Africa would face a mandatory 21-day quarantine to ensure they are not infected with the deadly disease. 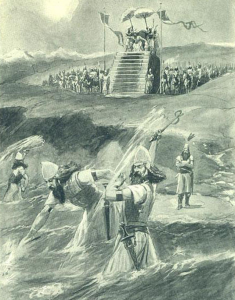 Yesterday, speaking at an international confab of defense ministers in Peru, U.S. Secretary of Defense Chuck Hagel unveiled his department’s Climate Change Adaptation Roadmap. A letter from Hagel asserts at the beginning of the Roadmap that:

While scientists are converging toward consensus on future climate projections, uncertainty remains. But this cannot be an excuse for delaying action. Every day, our military deals with global uncertainty. Our planners know that, as military strategist Carl von Clausewitz wrote, “all action must, to a certain extent, be planned in a mere twilight.”

Clausewitz, indeed. Side note: this quotation from the great 19th century German theorist of warfare appears to come from the translation of Colonel J.J. Graham, who, sadly, passed away in 1883, his edition have since been superseded by numerous quality 20th century translations. I like to picture Secretary Hagel composing his introduction to the Roadmap late at night in an elegantly appointed Northern Virginia study, perhaps by a roaring fire—strike that: too much carbon—with a snifter of brandy near at hand, suddenly reaching for his dog-eared and much beloved Graham translation of On War. Sure, his aides make gentle fun of this stubborn refusal to consult more contemporary editions—but the old fox is set in his ways. 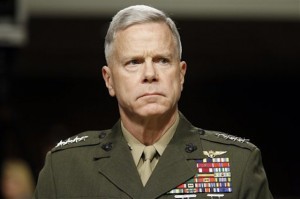 General James Amos, the 35th commandant of the Marine Corps, will come to the end of his term of office this week. Marines, as a matter of custom and temperament, are well known for revering their commandant. Difficult questions of doctrine or procedure within the Corps may be settled by asserting, without a shred of irony, that "the commandant wants it this way." Famously the most disciplined of the services, this respectful and admiring deference for the leader is part of what it has traditionally meant to be a Marine. Which makes it all the more strange that Jim Amos is so widely—and, on social media, openly—disliked by Marines. Over the weekend there was a new outbreak of criticism about the man, inspired by an 80-page report prepared by a critic of the commandant, a former Marine and lawyer named Lee Thweatt. The Marine Corps Times has the story: 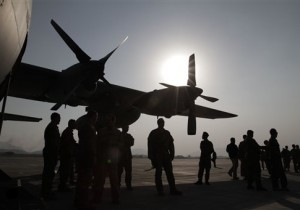 Sixteen military transport planes bought by the United States government for the Afghan Air Force (AAF) at a cost of nearly $500 million were recently destroyed by the Afghan military and sold for scrap parts at around 6 cents per pound, prompting a government inquiry to determine why millions of taxpayer dollars were wasted on the ill-fated program. 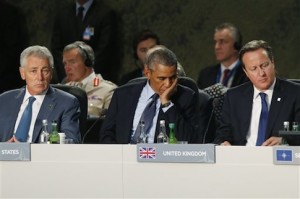 The NATO summit held earlier this month in Newport, Wales, the first such gathering of the 28-member alliance since 2012, was dominated by Russia’s ongoing aggression in Ukraine and violence in the Middle East. 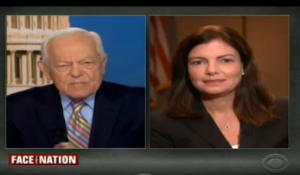 Sen. Kelly Ayotte (R., N.H.) on Sunday praised the work and life of journalist James Foley, a native of her state, as numerous lawmakers reiterated their disgust and concern over his “brutal” murder.
« Newer Articles
Previous Articles »