The panel on CNN's Inside Politics discussed the controversy surrounding Omar for comments she made at a March fundraiser at the Council on American Islamic Relations (CAIR). Omar spoke about the difficulties Muslims faced in the United States following the Sept. 11, 2001 terrorist attacks. She appeared to downplay the attacks by describing it as "some people did something." The comment sparked outrage and condemnation from Republicans and some Democrats.

President Donald Trump tweeted out a video of Omar's comments followed by footage of the airplanes flying into the Twin Towers and then the towers collapsing. Democrats condemned Trump's video and said his actions were inciting violence against the congresswoman.

"This has become a huge rallying cry for her critics. The president's video which includes video of the Twin Towers falling and splicing her words ‘some people did something.' You see those saying that goes beyond the pale. If you want to have a conversation with her, that's one thing. But using images of 9/11 they say, A, is wrong and B, could incite violence," CNN host John King said.

"Especially when your criticism of congresswoman Omar is she's being too lighthearted about 9/11, to then cut and splice that video together, seems like it's using that to make a very, very questionable political point," Demirjian said. "Before Trump started piling onto Congresswoman Omar who does have things to be concerned about, her commentary, her comments she was accused of being anti-Semitic and the other slips of the tongue she's made because she keeps failing into these traps, this is an issue dealt with by the Democrats.

"Now you have people defending her because the president has gone so far doubling down and making an example he thinks will play well to his base and is crossing the line, Democrats are accusing him of incitement, stereotyping and they've rallied around her." 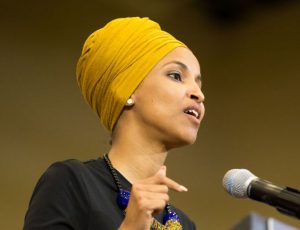