Three high-profile Democrats, including the Democratic Party's two highest ranking officials, took part in a YouTube live stream on Tuesday in which they discussed hot-button issues, but the trio only drew 138 total viewers by the end of the event.

The three party leaders discussed health care before Perez left and the conversation turned to net neutrality. Jessica Gonzalez from the pro-net neutrality group Free Press joined Ellison and Franken for the discussion. 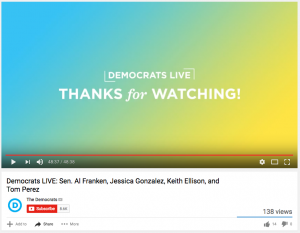 At one point early in the live stream, a shot of the audience showed what appeared to be mostly young people, some of whom may have been interns, as the event took place at DNC headquarters in Washington, D.C.

Repeatedly at the beginning of the live stream, Perez and Ellison told the crowd to text "RESIST" to a number for more information as they discussed the Democrats' "Resistance Summer." Later on, the panel accused the Trump administration of attempting voter suppression after President Donald Trump's commission on election integrity requested voter data from all 50 states.

"Did everybody in the studio audience enjoy your lobster?" Franken asked at the end of the event.

At the time of publication, the YouTube video had 289 views. The 138-viewer figure was drawn from the number of viewers who watched the event live by the end of the live stream.