The Vast Left-Wing Conspiracy Explained in One Chart

The Koch brothers—taking a break from such nefarious endeavors as spending money in support of their political positions and, worse, donating to hospitals—are going on the offensive with a campaign to expose the vast web of dark money spun by the Democracy Alliance.

A chart mapping out all the groups financed by the Democracy Alliance was distributed by Republicans on the Senate floor on Monday, and it makes clear just how extensive the liberal money hub really is. 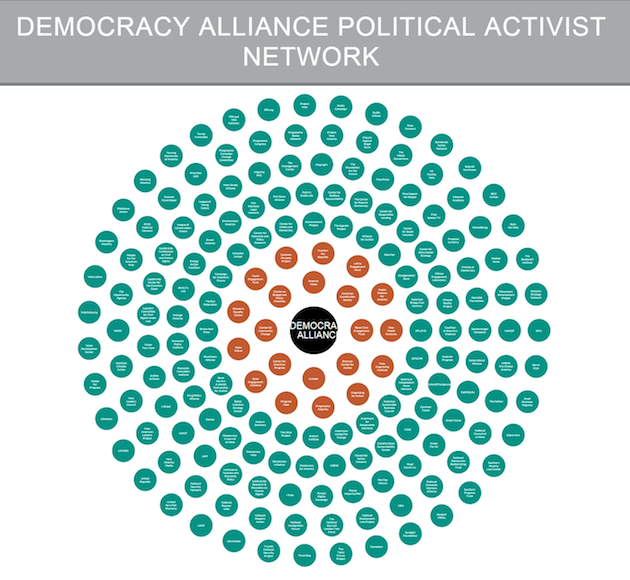 Included in the network are labor unions AFL/CIO, AFSCME, SEIU, UAW, and the Teamsters. Even "labor bank" Amalgamated finds itself in the Democracy Alliance web.

Also receiving Democracy Alliance support are major political organs such as Priorities USA, Majority PAC, House Majority PAC, Progressive Majority, Tom Steyer’s NextGen, and the group that used to be known as Obama for America but later transformed itself into Organizing for Action.

Progressive think tanks get in on Democracy Alliance action as well. The Center on Budget and Policy Priorities, Brennan Center for Justice, J Street, and Center for American Progress are all partners of the funding hub.

The list goes on to include media outlets such as Mother Jones and the Nation, advocacy groups such as Planned Parenthood, the NAACP, EMILY’s List, and Michael Bloomberg’s Mayors Against Illegal Guns coalition.

The chart illustrates how the core groups of the progressive movement are all taking cash from the same secretive network of liberal donors.

Democracy Alliance is able to obscure the identity of the donors included in its network  through its strategy of having members make private donations based on a "progressive infrastructure map" crafted in closed-door meetings. Those included in the meetings are prohibited from speaking publicly about the group's operations. No donations are made by the Democracy Alliance itself.

The model makes it difficult to track the relationships between donors and progressive groups and between each other, and thus helps to obscure the significant influence of big money in the progressive movement.

Even though outside money to Super PACs so far this cycle has come predominantly from the left, all some want to talk about is the Koch brothers.