State: ‘No Decision Has Been Made’ Regarding Syria; Media Coverage Suggests Otherwise

State Department spokeswoman Marie Harf said Wednesday that no decision had been made regarding the next steps in Syria, although U.S. media seemed to already know intimate details of the Obama administration's plans to take military action against Bashar al-Assad for his use of chemical weapons:

Q: When is the U.S. sharing plans with the SMC? They've publicly said that they're in the dark.

HARF: Sharing plans about what?

Q: I guess next steps forward.

HARF: Well, I would reiterate yet again that no decision has been made about what our next steps will be here, our response. But I can say that yesterday our coordinator for U.S. assistance to the Syrian crisis, Mark Ward, spoke with General Idris, who reaffirmed that his forces would protect U.N. investigators if they're allowed to return to opposition-controlled territory. They've been saying this to us all along. So this again, is another data point that the opposition has pledged that they will help the inspectors, and the regime is the one preventing them to. We would also add that a range of U.S. officials remain in regular contact with the leadership and staff of both the SOC and the SNC. Ambassador Ford is in Istanbul still meeting with opposition leaders, including SOC President Jarba, and with counterparts from our allies and partners, as well.

Front pages of major newspapers Wednesday made it fairly clear a decision had in fact been reached by the administration regarding Syria. Here are three: 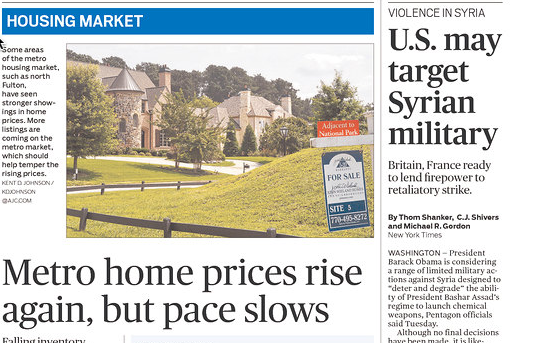 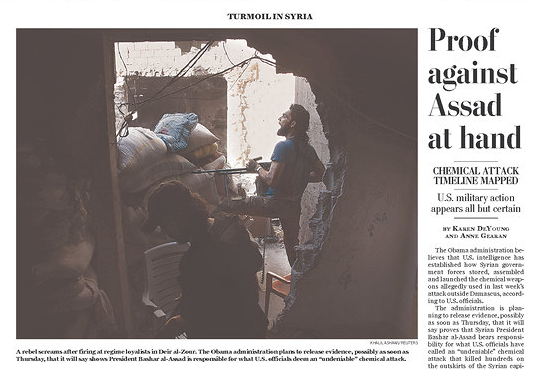