Democratic Senate candidate Kyrsten Sinema refused to say whether she regrets making a comment in the wake of the 9/11 terrorist attacks that it would be "fine" if Americans wanted to join the Taliban, despite her opponent calling the comment "treasonous."

When asked twice by an NBC reporter about her past comments on Sunday, Sinema instead said her opponent, Rep. Martha McSally (R., Ariz.), "crossed the line" by bringing up the "off-hand comment."

"Do you regret that comment at that time?" Vaughn Hillyard asked Sinema.

"You know, Martha crossed the line with those comments," Sinema responded.

"Do you regret that statement at all?" Hillyard asked.

"Well, it was an off-hand comment [made] during an interview about a war that I believed was misguided," Sinema said, "and still believe is misguided."

Sinema, a current congresswoman representing Arizona's 9th Congressional District, then turned the attention to her candidate. "What Martha has chosen to do is run a very negative campaign, based on false attacks and smears and lies. And that's her choice. But I think Arizonians are choosing the person that they believes shares their values and they believe will stand up for them," she said.

"As an individual, if I want to go fight in the Taliban army, I go over there, and I'm fighting for the Taliban, I'm saying that's a personal decision," Hancock said.

"Fine. I don't care if you go and do that, go ahead," Sinema replied.

Sinema also said the U.S. military went into the Middle East for "a number of reasons," including "oil, power, control" of the region.

Two months after the interview, Sinema told the Arizona Republic that "we should feel compassion" for enemy combatants killed in Iraq.

McSally, a retired Air Force officer, condemned Sinema during a debate for the comments. She asked the Arizona Democrat whether "she was going to apologize to to the veterans and me for saying it's okay to commit treason."

Polls heading into Election Day show Sinema and McSally in a dead-heat, with Sinema just slightly ahead in the RealClearPolitics average. 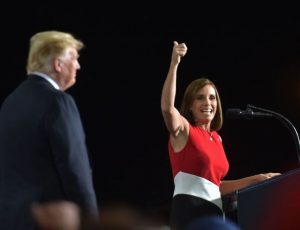