West Virginia's Republican attorney general Patrick Morrisey went on the offensive after the managing editor of the Charleston Gazette-Mail said in a now-deleted tweet that Morrisey would have attempted to jail Martin Luther King Jr. if he was around at the time.

The statement from the Gazette-Mail's Greg Moore came in response to a tweet Morrisey sent  on Monday containing King's famous quote, "The arc of the moral universe is long, but it bends toward justice." Moore quoted the tweet and said, "If @MorriseyWV had been around at the time, he would have been trying to put MLK in jail and keep him there."

Moore has since deleted his tweet, which can be viewed below, saying he "tweeted angry" after learning his paper was declaring for bankruptcy and being sold. 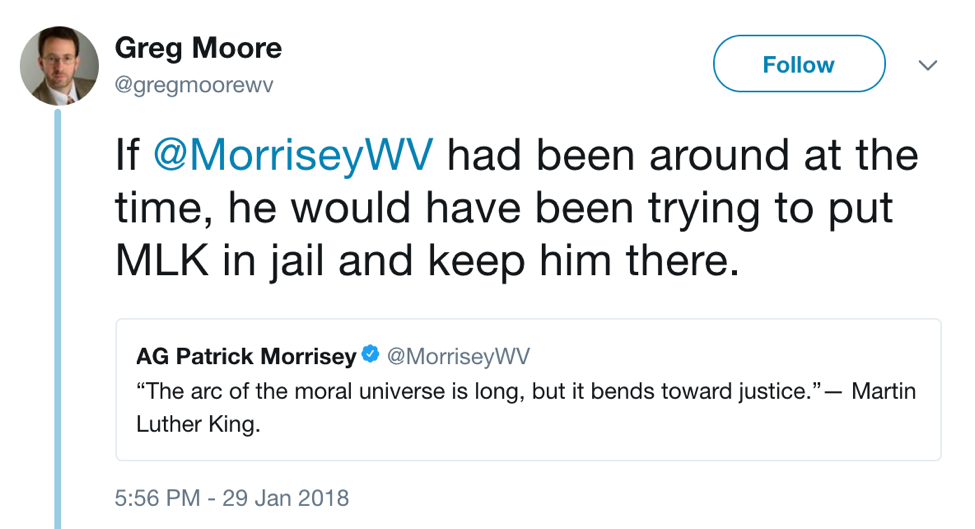 Morrisey responded immediately by saying Moore has "no business being a managing editor of a newspaper." He elaborated in a statement sent out by his Senate campaign on Tuesday morning.

"This is a stunning example of the bias and hatred in the liberal media, and it has no place in journalism," Morrisey said. "It is also a childish, ad hominem attack that isn’t based in policy or real-world evidence."

Morrisey said Gazette-Mail staff are too busy "foaming at the mouth in their ivory tower" to realize they are "wildly out-of-touch with the vast majority of West Virginia citizens."

"The Charleston Gazette-Mail is wildly out-of-touch with the vast majority of West Virginia citizens," he said. "If the editors and reporters at the Gazette-Mail would spend half the amount of time talking to hardworking West Virginians as they do foaming at the mouth in their ivory tower, they might discover there are good people who don’t subscribe to their San Francisco manifesto."

The Gazette-Mail's 2016 presidential endorsement went to Democrat Hillary Clinton, who received just 26 percent of the vote in West Virginia.