Rep. Jerry Nadler (D., N.Y.) said on Sunday that the hush payments from President Donald Trump to women who claimed to have had an affair with him may rise to "impeachable offenses."

"If it is proven that the president directed or coordinated with Cohen to commit these felonies – And I understand it has not yet been. It's been alleged but not yet proven. If it's proven, would they be impeachable offenses?" CNN's "State of the Union" anchor Jake Tapper asked.

Prosecutors allege the president's former personal lawyer Michael Cohen acted at the direction of Trump, referred to as Individual-1 in a court filing, when he made payments to several women during the campaign.

"In particular, and as Cohen himself has now admitted, with respect to both payments, he acted in coordination with and at the direction of Individual-1," the court documents read.

Nadler said the initial charges point toward a "much broader conspiracy against the American people."

"The fact of the matter is that what we see from these indictments and charging statements is a much broader conspiracy against the American people, involving these payments, involving an attempt to influence the campaign improperly, with improper payments involving the Russians, trying to influence the campaign, involving the president lying for an entire year about his ongoing business dealings with the Russians, involving obstruction of justice," Nadler said. "All of these have to be looked at very seriously by the Congress, by the special counsel and by the Justice Department to see what actions we should then take. And what is clear also is that the Republican Congress absolutely tried to shield the president. The new Congress will not try to shield the president."

Tapper asked for more information on when impeachment proceedings would be appropriate.

"Can you explain what you mean when you differentiate between maybe these are, if proven it's impeachable offenses, but that does not necessarily mean that the offenses themselves are important enough to actually begin proceedings of impeachment?" Tapper asked.

"It's not necessarily a difference. It's simply two different considerations. You don't necessarily launch an impeachment against the president because he committed an impeachable offense," Nadler said. "There are several things you have to look at. One, were impeachable offenses committed, how many, et cetera. Secondly, how important were they? Do they rise to the gravity where you should undertake an impeachment? An impeachment is an attempt in effect to overturn or change the result of the last election. You should do it only in very serious situations." 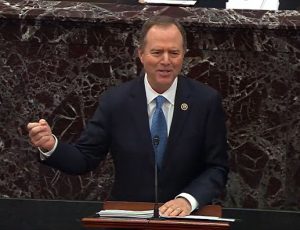