Sen. Mazie Hirono (D., Hawaii) sent a fundraising email on Thursday less than 30 minutes into the opening remarks of the Senate Judiciary Committee hearing about how she has been "fighting the Republicans who are desperate to rush Brett Kavanaugh's nomination and deny a fair investigation into credible sexual misconduct allegations against him."

Hirono serves on the Senate Judiciary Committee overseeing Thursday's hearing to address sexual assault allegations against Supreme Court nominee Brett Kavanaugh. She has been an outspoken critic of Kavanaugh's "ideological agenda" and called for President Donald Trump to withdraw his Supreme Court nomination on Wednesday.

Christine Blasey Ford, a professor of psychology at Palo Alto University in California, accused Kavanaugh of drunkenly pinning her to a bed, groping her, and trying to stifle her screams at a high school party in the early 1980s. Kavanaugh has denied the allegations, as has his former classmate Mark Judge, who Ford claims was also in the room at the time of the alleged incident. Two other people who Ford alleges were at the party in question have also denied any knowledge of the party or sexual assault.

"Here come the fundraising-off-Kavanaugh-hearing emails — less than 30 minutes into opening remarks, this one from @maziehirono," CNN reporter Kate Bennett tweeted.

here come the fundraising-off-Kavanaugh-hearing emails — less than 30 minutes into opening remarks, this one from @maziehirono: pic.twitter.com/AOTEghweoG

"This has to be my focus. I'm going to continue to prepare and demand a thorough investigation into these claims – and I am going to fight to make sure Dr. Christine Blasey Ford, Deborah Ramirez, and any other woman who courageously steps forward to tell her story isn't smeared by conservatives ready to walk over these credible claims against Kavanaugh," Hirono wrote.

"What that means is I have limited time to campaign for our re-election or to fundraise – making us particularly vulnerable to right-wing attacks. So, while I'm focused on stopping Kavanaugh's nomination and finding the truth, I'm asking you to step up now and ensure my team in Hawaii has everything they need to win our campaign in November. Can I count on you?" Hirono added.

About an hour later, Hirono sent a followup email apologizing for the "error" of sending the fundraising email.

"A fundraising message was sent this morning in error. We apologize sincerely for the error. All contributions made on this page will be donated to organizations helping survivors of sexual assault," the email read.

This isn't the first time Democratic senators have tried–intentionally or not–to fundraise off resistance to Kavanaugh. Sens. Kamala Harris (D., Calif.) and Cory Booker (D., N.J.) used their roles in the confirmation hearings to fundraise for their political campaigns. 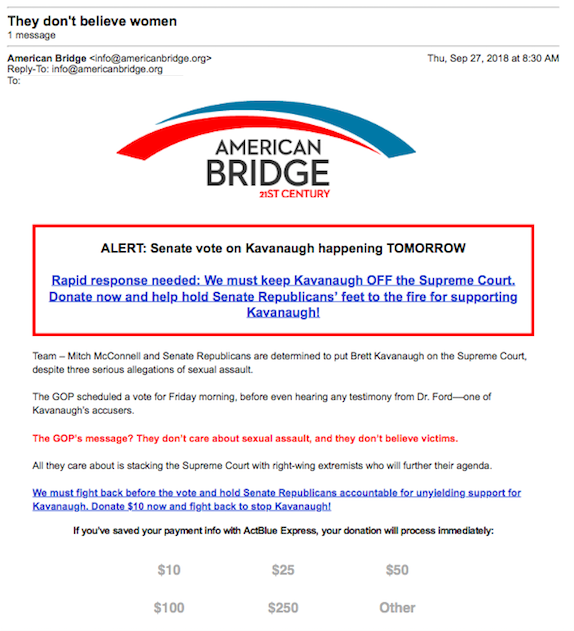