The death of Cuba's former dictator Fidel Castro late Friday was met with both celebration and regret, with a number of American politicians spotlighting the violent oppression of his regime while some world leaders mourned his loss.

U.S. President-elect Donald Trump labeled Castro a "brutal dictator" and described his legacy as one of "firing squads, theft, unimaginable suffering, poverty and the denial of fundamental human rights." Trump said his administration will work to help the Cuban people move away from oppression.

"While Cuba remains a totalitarian island, it is my hope that today marks a move away from the horrors endured for too long, and toward a future in which the wonderful Cuban people finally live in the freedom they so richly deserve," Trump said Saturday. "Though the tragedies, deaths and pain caused by Fidel Castro cannot be erased, our administration will do all it can to ensure the Cuban people can finally begin their journey toward prosperity and liberty."

President Obama, who has cultivated warmer relations with Cuba, offered condolences to Castro's family and acknowledged the "powerful emotions" that the event will foster in the Cuban people. Obama did not relay any direct criticism of Castro for his leadership.

"We know that this moment fills Cubans—in Cuba and in the United States—with powerful emotions, recalling the countless ways in which Fidel Castro altered the course of individual lives, families, and of the Cuban nation. History will record and judge the enormous impact of this singular figure on the people and world around him," Obama said.

Cuban President Raul Castro announced the death of his brother late Friday in a televised address. Fidel Castro, who was 90 years old, ruled over Cuba for almost five decades before passing the power to his younger brother in 2008. A polarizing figure, Castro has been widely criticized for cracking down on political and economic freedoms, while some have praised him as a revolutionary. 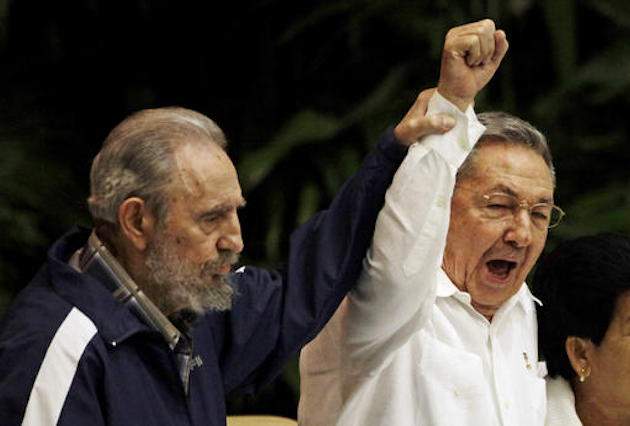 "Over more than half a century, he played an outsized role in their lives, and he influenced the direction of regional, even global affairs," Kerry said in a statement. "As our two countries continue to move forward on the process of normalization—restoring the economic, diplomatic and cultural ties severed by a troubled past—we do so in a spirit of friendship and with an earnest desire not to ignore history but to write a new and better future for our two peoples."

Multiple U.S. lawmakers with ties to Cuba took the moment to offer stinging assessments of Castro's regime, describing the former leader's rule as oppressive and singling out his human rights abuses.

"Since he took power over half a century ago, Fidel Castro proved to be a brutal dictator who must always be remembered by his gross abuses of human rights, systemic exploitation of Cubans, unrelenting repression, and stifling censorship upon his own people. Fidel's oppressive legacy will haunt the Cuban regime and our hemisphere forever," Sen. Bob Menendez (D., N.J.), whose parents fled Cuba, wrote on Facebook.

"Fidel Castro's death represents an historic opportunity for the United States. Instead of condoning the continuation of repressive actions of a repressive regime simply because some believe it's been long enough, the United States and the international community must stand up and support the Cuban people as they seek ways to implement changes that bring the fundamental principles of democracy, reinstate the freedoms that inform society and unleash the creative and inventive power-of-people to build a better life for themselves and their families," Menendez wrote.

Many American lawmakers looked forward to the work ahead to secure freedoms for the Cuban population. Rep. Ileana Ros-Lehtinen (R., Fla.), who was born in Cuba and was forced out of the country along with her family at a young age, said Castro's death was an opportunity to put an end to the "last remaining communist bastion of the Western hemisphere."

"We must seize the moment and help write a new chapter in the history of Cuba; that of a Cuba that is free, democratic, and prosperous," Ros-Lehtinen said. "A Cuba where faith in God has prevailed over tyranny, a Cuba whose people rose up to meet the challenges placed before them and overcame them through sheer patriotism and love of country."

Sen. Marco Rubio (R., Fla.), whose parents immigrated from Cuba, said Castro will be remembered as "an evil, murderous dictator who inflicted misery and suffering on his own people."

"Sadly, Fidel Castro's death does not mean freedom for the Cuban people or justice for the democratic activists, religious leaders, and political opponents he and his brother have jailed and persecuted," Rubio said. "The dictator has died, but the dictatorship has not."

Sen. Ted Cruz (R., Texas), whose father fled Cuba under the Castro regime, took the moment to recognize those who fought against the "brutal" Castro regime.

"Fidel Castro's death cannot bring back his thousands of victims, nor can it bring comfort to their families," Cruz wrote on Facebook. "Today we remember them and honor the brave souls who fought the lonely fight against the brutal Communist dictatorship he imposed on Cuba." 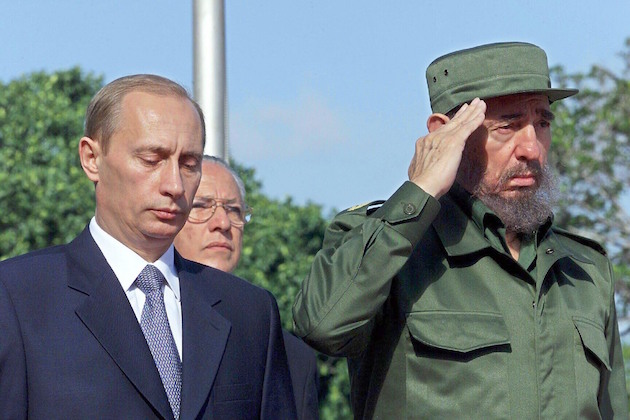 Vladimir Putin and Fidel Castro in 2000

Several foreign leaders mourned the loss of the former dictator, with Russian President Vladimir Putin and others offering complimentary takes on Castro's leadership.

"The name of this remarkable statesman is rightfully viewed as a symbol of a whole era in modern history," Putin said when communicating his condolences to Raul Castro. "Free and independent Cuba built by him and his fellow revolutionaries has become an influential member of the international community and serves as an inspiring example for many countries and peoples. Fidel Castro was a sincere and reliable friend of Russia."

"This strong and wise man always looked into the future with confidence. He embodied the high ideals of a politician, citizen and patriot who wholeheartedly believed in the cause, to which he devoted his life," Putin continued. "Russians will always cherish his memory in their hearts."

Syrian President Bashar al-Assad called Castro a "great" leader in a letter of condolences sent on Saturday to the current Cuban president, according to the Syrian Arab News Agency.

"Our friend Cuba was able under his leadership to stand its ground in the face of the most ferocious of sanctions and unfair campaigns witnessed in our modern history," Assad wrote. "The name Fidel Castro will live forever in the minds of generations and remain an inspiration for all the peoples who aspire to achieve real independence and liberation from the yoke of colonialism and hegemony."

Mexican President Enrique Peña Nieto wrote on Twitter that Castro "was a friend of Mexico, promoter of a bilateral relationship based on respect, dialogue and solidarity."

Premier Li Keqiang of the People's Republic of China also relayed "the deepest condolences" over Castro's death on behalf of the Chinese government and people.

"Premier Li said in the message that Fidel Castro had devoted his life to the liberation and national development of Cuba, and as the founder, guardian and pusher of China-Cuba relations, his contribution to the bilateral relationship will always be remembered," a statement released by the Chinese government said.

Mikhail Gorbachev, the former leader of the Soviet Union, said in a statement, "Fidel stood up for and strengthened his country at the time of the toughest American blockade, at a time of colossal pressure on him, and all the same he led his county out of that blockade onto the road of independent development."

Castro also earned praise from Justin Trudeau, Canada's liberal prime minister who won election last year. Trudeau regarded the former dictator as a "larger than life leader" and said it was an honor to have met Castro, who was a friend to his father.

"A legendary revolutionary and orator, Mr. Castro made significant improvements to the education and healthcare of his island nation. While a controversial figure, both Mr. Castro’s supporters and detractors recognized his tremendous dedication and love for the Cuban people who had a deep and lasting affection for ‘el Comandante,'" Trudeau said. "We join the people of Cuba today in mourning the loss of this remarkable leader."

A spokesman for United Nations Secretary-General Ban Ki-moon said that he was "saddened" at the news of Castro's death and underlined the commitment of the international organization to work with the Cuban people to achieve greater reform in the country.

"President Fidel Castro will be remembered for his leadership of the Cuban revolution and for advances in Cuba in the fields of education, literacy, and health. His revolutionary ideals left few indifferent. He was a strong voice for social justice in global discussions at the U.N. General Assembly and international and regional forums," the spokesman said. "The secretary-general extends his condolences to the Cuban people and to the family of the former president, particularly to President Raul Castro."

The positive descriptions of Castro's achievements sparked criticism, with many saying that he should not be honored for oppressing the Cuban peopled. Former House speaker Newt Gingrich chastised those praising Castro, writing on Twitter, "The outpouring of praise for Fidel Castro is tragic. He was a relentless dictator who imprisoned thousands, killed and tortured many Cubans."

"Castro's policies impoverished the Cuban people. Look at the cars in pictures. A dictatorship that drove out hundreds of thousands of Cubans," Gingrich wrote. "Build a list of those praising Castro and you will have a list of leftists who reject reality for an ideological fantasy."

Some world figures neither praised nor criticized Castro, describing him as emblematic of the Cuban revolution.

"Fidel Castro was a major figure of the 20th century. He embodied the Cuban revolution, in the hopes it aroused and the disappointments it provoked," French President Francois Hollande said. "Actor of the Cold War, he represented a period of history that ended with the fall of the Soviet Union. He represented, for Cubans, pride in rejecting external domination."

Pope Francis sent a telegram to Raul Castro expressing his condolences, saying, "I express my sentiments of sorrow to Your Excellency and other family members of the deceased dignitary, as well as to the people of this beloved nation. At the same time, I offer prayers to the Lord for his rest and I entrust the whole Cuban people to the maternal intercession of our Lady of the Charity of El Cobre, patroness of that country."