KIEV, Ukraine—Shortly past midnight on Sept. 15, a part of the Kiev-Western Ukraine-1 natural gas transit line exploded. The site pumps natural gas from Russia across Ukraine to underground storage facilities near the border with the EU.

The fact that Russian gas must cross Ukraine before it reaches customer nations in the EU has long been a sore point with Moscow. Ukraine’s energy consortium receives transit fees for carrying this gas through their pipelines, which in 2019 amounted to $3 billion. Even in this year of record low demand for oil and gas due to European economies deeply gutted from the coronavirus pandemic, transit fees will nonetheless amount to some $2 billion.

Luckily for the Ukrainians, the pipeline was repaired in only two days. By diverting the gas flow through other tributaries of the network during that time none of the EU users were cut off.

Explosions on Ukrainian gas lines are not a new phenomenon. Explosions occurred in May and December 2007 and then in March and June 2014. The June incident took place in the Poltava region and was judged by the Ukraine Interior Ministry to have been a deliberate act of sabotage.

Russian president Vladimir Putin weaponized Ukraine’s dependence on Russian gas long ago. Ukraine’s history is dotted with numerous incidents of Moscow "discovering" massive unpaid bills at critical moments—and then using them to pressure the government in Kiev. Russia even went so far as to completely shut off the gas valve to Ukraine during one such payment dispute in the winter of 2006.

"The problem for Russia is that if they make a practice of shutting off the gas supply, then it means that everyone downstream has their pipeline running on empty as well," said a Western diplomat at the time. "Closing the gas line? Moscow never did this before, not even in Soviet-Cold War times. This makes the Western European customers—the customers that Putin can in no way afford to lose—nervous and causes them to look for alternate suppliers."

Putin’s solution to all of his problems was Nord Stream 2—a project to carry gas directly to Germany through a pipeline laid along the North Sea seabed. This pipeline would bypass Ukraine, the Baltic States, and Poland, permitting him to shut down gas lines to those nations at will but without interrupting the flow to Germany and the rest of the EU.

In order to ensure the project’s political support, the European half of the consortium was formed from several major German, Dutch, and French gas companies. In a controversial move, former German chancellor Gerhard Schröder was made head of the shareholders' committee.

The managing director, however, is Matthias Warnig, a former East German Stasi officer who worked with Putin in the 1980s, when the latter was assigned as a KGB agent to the East German city of Dresden.

Foreign heads of state are generally required to schedule meetings with the Russian president months in advance, but Warnig reportedly has open access to the Kremlin. He and Putin reportedly see one other "generally every three weeks."

But Nord Stream 2 has since been halted due to sanctions placed on Russia by the United States. Washington has also threatened to sanction German, Austrian, and other European nations if their industries continue to participate in the program.

Calls for Germany to cancel the project altogether are part of the blowback from the August poisoning of Russian opposition leader Aleksei Navalny. It has since been revealed the poison that almost killed him was a variant of the Russian Novichok nerve agent. The same military-grade nerve poison was previously used in March 2018 against former Russian GRU (military intelligence) officer Sergei Skrypal and his daughter, who both now reside in the U.K.

As with the Skrypals, the use of this nerve agent signals Russian state involvement in another attempted assassination. This prompted Ursula von der Leyen, the former German defense minister who is now president of the European Commission, to call for the Nord Stream 2 project to be halted.

"To those that advocate closer ties with Russia, I say that the poisoning of Aleksei Navalny with an advanced chemical agent is not a one-off," said von der Leyen in her Sept. 16 state of the union address. "This pattern is not changing—and no pipeline will change that."

This makes the explosion a case of near-perfect timing—"almost too perfect," said a Kiev-based Western business analyst. "It’s the same kind of dirty tricks that the KGB and the Stasi were always proficient at."

The location of the explosion—only a short distance from the end of one of the Kiev underground lines—also conveniently makes it possible for endless numbers of news organizations to drive out and shoot photos and video of the site. The coverage is likely to contribute to an already steady stream of commentaries on how Germany cannot depend on Ukrainian pipelines and needs Nord Stream 2, no matter the cost to democratic principles. 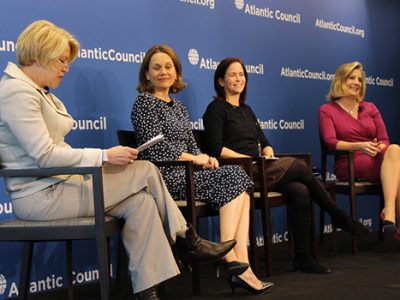 Atlantic Council Board Member Under Federal Investigation for Illegal Lobbying