Two U.S. Ground-based Interceptor missiles destroyed a target in space during a successful test of the Pentagon's strategic missile defense system on Monday.

The interceptor missiles were fired from Vandenberg Air Force Base, Calif. In the first salvo-launch against a target intercontinental missile launched 4,000 miles away at Kwajalein Atoll in the Marshall Islands, according to the Missile Defense Agency (MDA).

The first GBI destroyed the target missile's reentry vehicle and the second interceptor zeroed in on debris and blew up the largest piece in a precision kill, the MDA announced. 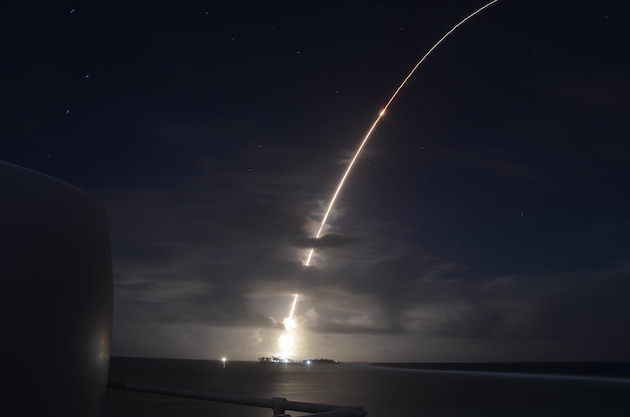 "The system worked exactly as it was designed to do, and the results of this test provide evidence of the practicable use of the salvo doctrine within missile defense," Greaves said.

"The Ground-based Midcourse Defense system is vitally important to the defense of our homeland, and this test demonstrates that we have a capable, credible deterrent against a very real threat."

The ultra high-speeds of incoming warheads and the speed of interceptors needed to hit them has been described as using a bullet to hit a bullet.

The defense system is designed to counter North Korean ICBMs and any future Iranian missiles. The Trump administration also is considering expanding the system with space-based defensive weapons to counter Russian and Chinese missiles in the future.

The administration is expanding the 44 missile defense interceptors deployed at Fort Greely, Alaska, and Vandenberg.

An additional 20 interceptors are being added.

On Friday, the Pentagon announced the award of a $4.1 billion contract to the Boeing Co. for the ground-based missile defense development and sustainment program for the new missile interceptor field with 20 GBIs.

The new interceptors will be delayed until a new redesigned kill vehicle is completed.

The entire value of the contract is around $10.8 billion. Among the new elements will be to develop software hardened against cyber and other attacks.

The complex missile defense system relies on space sensors, ground- and sea-based radar, and communications to provide targeting and tracking data as part of a battle management system.

The MDA said initial indications are that the test was a success but test data is being fully evaluated.

The missile defense system is under the command of the Colorado-based Northern Command. Northcom conducted the test together with the Joint Functional Component Command for Integrated Missile Defense, and elements of the Air Force Space Command's 30th, 50th, and 460th Space Wings.

The West Coast based defenses are designed to track and kill both intermediate- and long-range ballistic missiles.

MDA released photos and video showing interceptor and target launches and the space based impact.

"Every test is crucial. We learn from all of them, even when they fail," Thornberry said in a statement.

"However, yesterday's GMD test is the most complex ever attempted and its success is important. Missile defense programs are a vital part of our future security, one that has been politicized for too long."