Immigrants from Pakistan, Iraq, and Bangladesh received the most green cards from the United States in the past five years when compared to other Muslim-majority nations.

The U.S. granted 83,000 green cards to migrants from Pakistan and another 83,000 to migrants from Iraq between fiscal years 2009 and 2013, according to a chart produced by the Senate Subcommittee on Immigration and the National Interest using Department of Homeland Security data.

Migrants from Bangladesh received 75,000 green cards, those from Iran received 73,000, and those from Egypt received 45,000 to round out the top five. 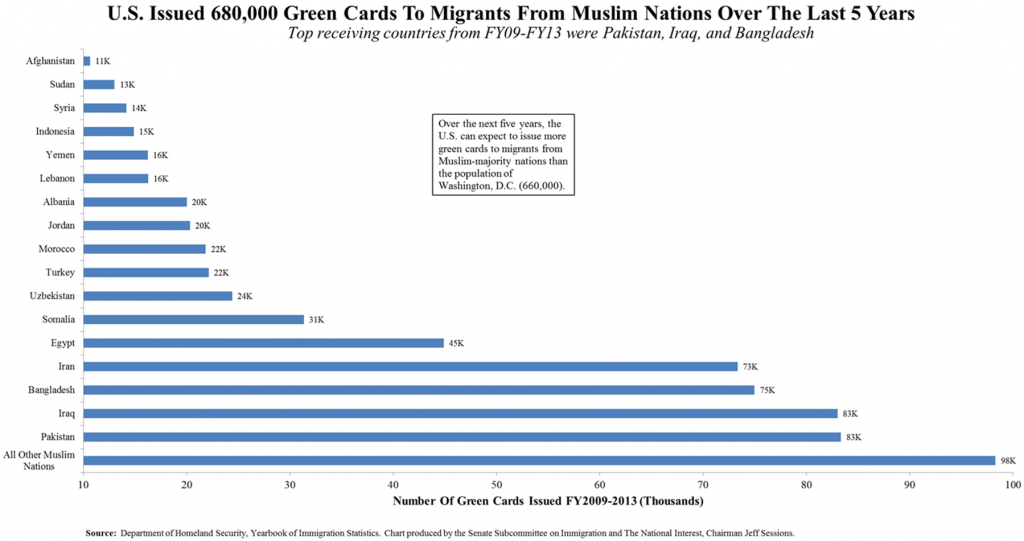 The U.S. is expected to issue another 660,000 green cards over the next five years to immigrants from Muslim-majority nations.

Concern regarding the United States’ granting of green cards has heightened in the wake of the deadly shooting in San Bernardino, California, that the FBI is currently investigating as an act of terrorism. One of the attackers, Pakistani national Tashfeen Malik, traveled to the U.S. last summer with her fiancé and fellow attacker Syed Rizwan Farook. She later obtained a green card.

A recent article in National Review cast light on the prevalence of anti-Semitism and other extreme beliefs in Muslim-majority nations. According to polling published by the Anti-Defamation League last year, nearly three-quarters of North African and Middle Eastern residents harbored anti-Semitic beliefs, including 92 percent of Iraqis, 69 percent of Turks, and 74 percent of Saudis.

Polling conducted recently by the Pew Research Center also indicated that about 50 million people from Muslim-majority nations express sympathy for the Islamic State (IS, also known as ISIL or ISIS), though the majority of Muslims hold unfavorable opinions of the terrorist group. The share of individuals viewing IS negatively is particularly low in Pakistan, where 28 percent of residents see the terror group unfavorably but 71 percent have a positive opinion or no opinion at all of IS.

Malik, one of the San Bernardino attackers, pledged allegiance to Islamic State leader Abu Bakr al-Baghdadi on social media at the time of the attack. The terrorist group has also said that both attackers, who are now dead, were supporters.