North Korea's first two long-range missile tests in July were among the six rockets that passed through Japanese airspace, and one of them landed very close to an Air France jetliner on July 28, according to a report by the Flight Service Bureau, a private aircraft operations service.

"The regularity and range of the launches are increasing," the report said. "In 2015, there were 15 launches in total, of short-range ballistic and sub-launched missiles. In 2016, there were 24 launches, almost all being medium-range. In 2017, there have been 18 so far, with the first long-range missiles."

International aviation companies last year sought to minimize the risk to commercial jets by flying away from the Pyongyang flight information region.

But the report said that policy was no longer safe in avoiding possible hits by North Korean test missiles or debris.

Tensions remain high between the United States and North Korea after Pyongyang threatened to fire missiles near the U.S. island of Guam.

Defense Secretary Jim Mattis said Guam is "well protected" and any missile approaching would be knocked out by missile defense interceptors. But he also warned that a conflict might ensue from such an action and would be "game on."

"We'll know if it's going towards Guam within moments," he said Monday of detecting missile launches.

"I think if they fire at the United States, it could escalate into war very quickly, yes. That's called war, if they shoot at us." 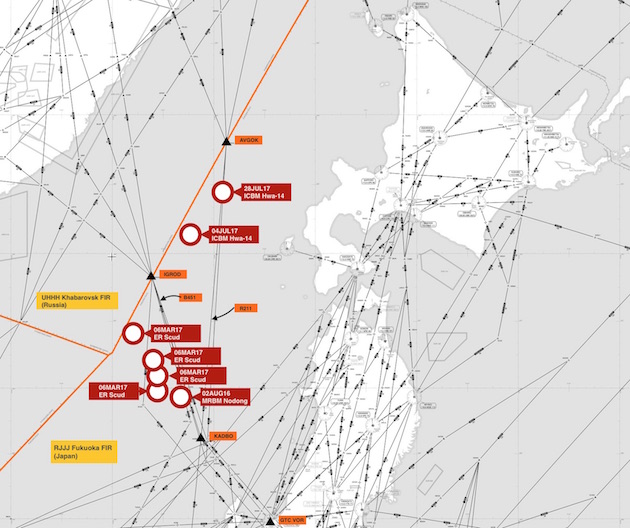 All those tests landed near two international flight paths used by commercial jets approaching Japanese airports from the west.

"Previously, almost all North Korean missile launches landed in their own waters and airspace," the report said. "With the development of longer range Scud and ICBM varieties, the missiles are predominantly re-entering into Japanese airspace. This creates a new risk to civil aviation."

Almost all North Korean launches are now carried out in an easterly direction from the peninsula, and although launch sites vary, trajectories have been programed to impact into an area of the Sea of Japan northwest of Japan. The testing policy appears aimed at preventing the rockets from landing on Japanese or South Korean land.

Former pilot and aviation expert John Nance said the odds of a missile or its debris hitting a jetliner is not a million to one, as some have suggested.

"It is a substantially higher potential for a piece of a missile if not the whole thing to hit a jetliner at altitude," Nance, an ABC News analyst, told the Washington Free Beacon.

"While North Korea's actions are a massive violation of international law, [the North Koreans] are obviously uninterested in lowering the threat they pose to international aviation, and, in fact, can be expected to make things worse," Nance added.

International air routes west of Japan and adjacent to North Korean airspace should be declared off limits for all commercial carriers, Nance said.

"Anything less constitutes an unacceptable gamble," he said.

Aviation safety, Nance noted, is not built on cavalier acceptance of a known risk, but is instead based on careful analysis of the broader potential for a degradation of safety, especially in an environment of uncertainty.

Ross Aimer, a retired United Airlines pilot who is now CEO of Aero Consulting Experts, also said he was aware of the growing threat to aviation near North Korea.

"Although very unlikely that any commercial airliner will be in danger of being struck by North Korean missile launch, it is never good that they do not give advance warnings to ICAO," Aimer said, referring to the International Civil Aviation Organization that works with commercial airlines on safety issues.

"All other nations follow this protocol, except for North Korea," he added. "This alone would be a major violation of civil aviation codes and protocols and grounds for their exclusion from using civilian air routes."

The July 28 ICBM test "flew through busy airspace used by commercial airliners," Davis said earlier this month. "It flew into space. It landed in Japan's exclusive economic zone, and an area that's used by commercial and fishing vessels. All of this completely uncoordinated."

The Air France flight from Tokyo to Paris on July 28 flew through the ICBM impact zone some 10 minutes before the missile impacted. The flight carried 332 people—316 passengers and 16 crew.

For that test, the missile's dummy warhead broke upon reentry into the atmosphere, spreading debris pieces over a wide area.

"The most recent ICBM failed on reentry, breaking up into many fragmented pieces, creating a debris field," the report said, adding that at about 12:15 a.m. local time on July 28 a large area around a major flight path approach to Japan "would have presented a real risk to an aircraft there," the report said. "Thankfully, there was none—although an Air France B777-300 had passed through some minutes before."

Air France initially denied the test missile threatened its jet but later announced the company was expanding a no-fly area near North Korea for its jets to avoid the flight path used on July 28.

The North Korean ICBM test flew in a lofted trajectory—more than 2,300 miles in space before coming down at a distance of 93 miles northwest of Japan's Okushiri Island after some 35 minutes.

South Korea's government also has said that in March 2014 a passenger jet passed through the trajectory of a North Korean missile in a "very dangerous" manner.

Aviation analyst David Soucie told CNN the chances of a missile hitting a place were "billions to one." But an impact of a missile with a commercial jet had the potential to start a war, he said.

The Flight Service Bureau report disputed the high odds of an impact.

"Can a falling missile hit an aircraft? Following the Air France 293 report on July 28, the media has favored the ‘billions to one' answer. We don't think it's quite as low," the report said.

The risk is higher because six missiles landed near two busy international flight paths so far this year and one test missile and possibly others broke up upon reentry.

"Any fragment of reasonable size hitting a tailplane, wing, or engine at 500 knots creates a significant risk of loss of control of the aircraft," the report said. "How many fragments were there across the six launches? Maybe as high as a hundred pieces. The chances are not as low as it may initially appear."

According to the report, North Korea stopped providing international notification for its missile launches in 2014, an action that has prevented ICAO from issuing safety notices to airlines to avoid the missile impact zones days before the tests.

Air traffic control warnings are difficult to generate for commercial aircraft because of the time it takes for radar or sensors in the region or at the U.S. Strategic Command to relay the information to airlines.

Long-range missiles fly "for about 35 minutes before re-entry," the report said. "Even with an immediate detection, it's unlikely that the information would reach the Japanese radar controller in time to provide any alert to enroute traffic. Further, even with the knowledge of a launch, traffic already in the area has no avoiding option, given the large area that the missile may fall in."

The report urged airlines to consider rerouting flights over the Japan land mass east of the impact zone, noting that it is unlikely North Korea would risk targeting one of its test missiles to land on the main island of Honshu or the other main island of Hokkaido.