A video posted online Oct. 24 revealed that the Humvee had been fortified with metal plates and packed with explosives as a jihadist suicide bomber drove it into a Shiite militia base, causing a huge explosion.

The use of the Army vehicle appears from the video to have been part of the large amount of U.S.-supplied weapons and equipment captured by the Islamic State during its takeover of part of Iraq last year.

The terrorist who conducted the attack was identified in the video as Abu-Khalid al-Tajiki, possibly an Islamic State member from Tajikistan who appeared to be in his 20s.

The vehicle had been painted in Army camouflage and is outfitted with a yellow steel sheet in the front of the vehicle. It was filmed driving to an Iraqi desert outpost described in the video as a base for Iraqi Shiite militias. 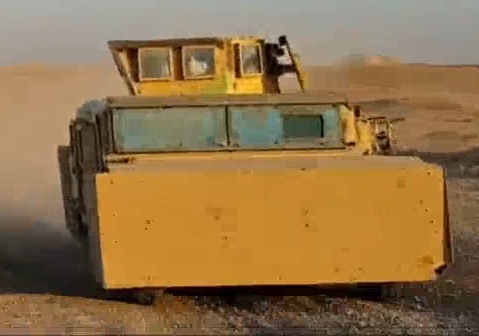 The vehicle was attacked by forces at the base and dodged fire before disappearing and detonating a bomb, setting off a large explosion.

The video was a production of what the Islamic State (IS, also known as ISIS or ISIL) considers the Anbar Province branch of its caliphate.

Pentagon spokeswoman Cmdr. Elissa Smith said the video has not been verified.
"But if authentic, ISIL uses numerous methods of warfare in their quest to project terror within Iraq and Syria," she said. "Improvised explosive devices are one of many methods they have employed."

"It appears to be an up armored [Humvee] from the structure and armored window panes with an armored cupola on top," said Joe Myers, a former Army officer with intelligence experience in Southwest Asia.

Myers said it appears that bomb makers reinforced the vehicle on the front and sides with steel plating that can be used to pre-detonate any light anti-armor weapons that would be used against it.

The shielding also provided added protection against small-arms fire as well as giving the vehicle bomb the capability of pushing through light barricades.

"As the vehicle drives to target it appears to show it was engaged at some point by a flash against it then later in the video shows a large explosion, likely the [bomb] detonating to unknown effect," Myers said.

The car bomb made out of a U.S. Army vehicle highlights the terrorist group’s use of captured weapons. 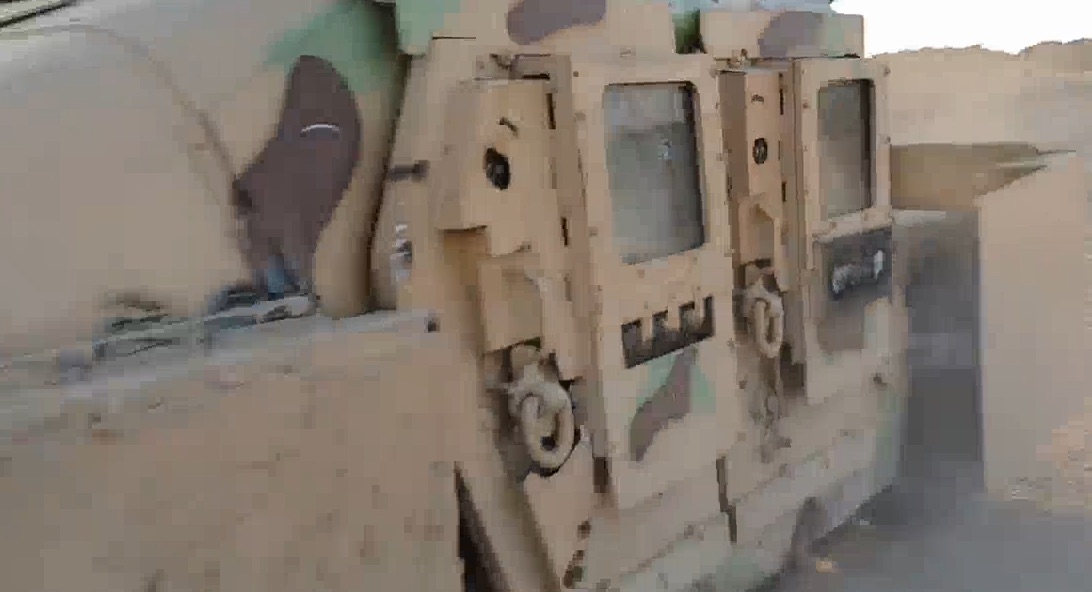 Side view of captured Humvee (screenshot)

In June, Haider al-Abadi, the Iraqi prime minister, said that in Mosul alone "we lost 2,300 Humvees."

After the Islamic State took over the city of Ramadi, Iraqi forces lost six tanks, some artillery, and around 100 more Humvees.

"This is another example of IS using our equipment against us and our restrictive [rules of engagement], plus not arming the Kurds with anti-tank weapons is putting us at a disadvantage," said retired Air Force Lt. Gen. Thomas McInerney, using an acronym for the Islamic State.

"That hummer should have been destroyed before it got there either by air assets or anti-tank weapons, as should any [armored vehicle] or hummer operating in IS-controlled territory," he added.

Other online reports indicate that the Islamic State is using advanced anti-tank weapons.

The attack took place at a checkpoint in Hama province in northeastern Syria.

Most of the arms were taken last year during the Islamic State raid into Iraq against the northern city of Mosul when an Iraqi division fled from the invading fighters.

The largest capture of weapons resulted from the fall of Iraq’s Second Division, based in Mosul. The division was equipped with hundreds of vehicles that were part of a motorized brigade and several infantry brigades.

The Pentagon expressed concerns about the loss of the weapons at the time.

The weapons from Mosul included large numbers of Humvees, some Russian-made T-55 tanks, and some M-1 Abrams tanks, along with towed artillery, armored vehicles, and troop transports.

A recent State Department security report stated that the Islamic State has obtained between $20 billion and $50 billion worth of captured weapons.

James F. Jeffrey, a former infantry officer, diplomat and policymaker during the George W. Bush administration, said IS captured large quantities of Humvees and M-16 rifles during the fall of Mosul and Ramadi.

However, the tactical significance of the captures is limited because there are plenty of alternatives for U.S. assault weapons and light wheeled armored vehicles in the Syria-Iraq area of operations where IS operates, said Jeffrey, now with the Washington Institute for Near East Policy.

"The bulk of U.S. assistance was and is aircraft, Paladin 155mm howitzers and Abrams tanks," Jeffreyl said. "ISIS had captured no aircraft and only a few of the ground systems which it has not been able to employ. So strategic effect of these captures is close to zero."

U.S. airstrikes carried out over the past year have failed so far to dislodge Islamic State fighters from key areas of the country.