The Obama administration is pursuing a nuclear deal with Iran that leaves the Islamic Republic a year away from obtaining a nuclear bomb and which, according to experts, gives the United States insufficient leverage to dismantle Tehran’s nuclear infrastructure.

As negotiations with Iran hit a critical juncture, U.S. officials and policy experts from across the spectrum are warning that the Obama administration is poised to agree to a deal that all but guarantees Tehran the ability to build a nuclear bomb.

The position outlined by President Obama and key administration officials in recent interviews represent a significant shift in U.S. negotiating policy over the past few years. The administration, critics argue, has walked back its own red lines in talks, conceding to Iran the ability to retain its core nuclear infrastructure and the technological know-how to build a weapon.

Prime Minister Benjamin Netanyahu of Israel expressed concerns over the administration’s stance on Tuesday during remarks before a joint session of Congress.

"If the deal now being negotiated is accepted by Iran, that deal will not prevent Iran from developing nuclear weapons," Netanyahu said. "It would all but guarantee that Iran gets those weapons, lots of them.

"We know for sure that any deal with Iran will include two major concessions to Iran," Netanyahu added. "The first major concession would leave Iran with a vast nuclear infrastructure, providing it with a short break-out time to the bomb."

"According to the deal, not a single nuclear facility would be demolished," he said. "Thousands of centrifuges used to enrich uranium would be left spinning. Thousands more would be temporarily disconnected, but not destroyed."

Permitting Iran to retain the core of its program—and return to it after a reported 10-year period—would keep Tehran a year away from obtaining a nuclear bomb, Netanyahu said.

"Because Iran’s nuclear program would be left largely intact, Iran’s break-out time would be very short—about a year by U.S. assessment, even shorter by Israel’s," he said. "And if—if Iran’s work on advanced centrifuges, faster and faster centrifuges, is not stopped, that break-out time could still be shorter, a lot shorter."

President Obama confirmed this timeframe Tuesday in a response to Netanyahu’s speech, saying that the proposed deal would "ensure that [Iran] did not have what we call a break-out capacity that was shorter than a year's time."

Many U.S. lawmakers agree with Netanyahu’s assessment and are beginning to signal that they will block the proposed deal.

"Prime Minister Netanyahu is right to argue that the clear alternative to a bad deal is a better deal with Iran, one that only lifts crippling pressure on the Iranian regime when it stops its nuclear weapons program, stops aggression against its neighbors, stops supporting terrorism, and stops threatening to annihilate Israel," Sen. Mark Kirk (R., Ill.), a critic of the White House’s strategy, said in a statement.

"Netanyahu made a powerful case to the American people on why a bad nuclear deal with Iran, one that allows the world’s biggest state sponsor of terrorism to keep vast capabilities to make the world’s worst weapons, is worse than no deal," Kirk said. "A nuclear-armed Iran poses the greatest long-term threat to the United States, Israel, and our allies in the Gulf.

"I stand with Netanyahu’s demands today that Iran’s government must change its behaviors," Inhofe said in a statement following the prime minister’s remarks. "This must be a non-negotiable item in any agreement the United States seeks to reach with Iran, and anything short of it will be a bad deal, not only for Israel but for the West."

"I hope the president was listening today and will reverse course on the unfortunate leverage he has given the government of Iran over the past year to continue pursuing its nuclear weapon’s capabilities," Inhofe said.

The key concession causing alarm among administration critics hinges upon the president’s approval of a so-called sunset clause in the deal that effectively allows Iran to restart its nuclear program after a decade of relief from economic sanctions (a demand that Tehran has already rejected).

This differs from the White House’s negotiating posture in previous years, which focused on dismantling Iran’s nuclear program.

Other top administration officials also made this claim.

Bernadette Meehan,  spokeswoman for the NSC, also pushed the notion of Iranian concessions in December 2013 remarks.

"We are prepared to negotiate a strictly limited enrichment program in the end state, but only because the Iranians have indicated for the first time in a public document that they are prepared to accept rigorous monitoring and limits on level, scope, capacity, and stockpiles," she said at the time.

Mark Dubowitz, a nuclear expert and executive director at the Foundation for Defense of Democracies (FDD), said Iran has gained the upper hand in talks with the United States

"The Obama position has gone from dismantle and disclose to disconnect and defer," Dubowitz said. "They have squandered their negotiating leverage to an Iranian regime that entered negotiations with a weak hand and looks likely to get what it also wanted—nuclear weapons, a growing economy, and regional dominance."

"The Obama administration significantly underestimated the value of the direct and indirect economic relief triggered by the JPOA and the de-escalation of sanctions pressure," he explained. "Iran’s economy, which was once on its back is now on its knees and getting up to its feet. The Obama administration responded to Iranian declarations that key nuclear elements were nonnegotiable by agreeing to these demands."

David Brog, executive director of Christians United for Israel, said that the president is surrendering to Iran in negotiations.

"President Obama has repeatedly promised that he will never permit Iran to get a nuclear weapon," said Brog. "Was this a word game? Does the content of this pledge depend upon what the meaning of the word "never" is? By all accounts the agreement taking shape in Geneva will allow Iran to obtain nuclear weapons. In the most optimistic scenario, it merely delays this dark day. This is surrender on the installment plan."

"It boggles the mind just how much the Obama administration has already conceded to Iran, to include a significant ability to enrich uranium and make ballistic missiles, as well as sanctions relief that’s resuscitated Iran’s tanking economy, all before Iran has done anything to prove the world that it no longer has any secret nuclear activities," the aide said.

The Obama administration’s repeated concessions to Iran are also being noticed with alarm among pro-Israel policy makers.

"We set out to stop Iran from acquiring a nuclear weapons capability. And now we’re settling on allowing them to acquire that capability in a decade," said one pro-Israel policy expert involved the debate. "If the president convinces Congress to capitulate on a bad deal, a decade from now, we will look at this moment the same way we now look at Chamberlin’s ‘peace in our time.’"

Another D.C.-based official with a pro-Israel organization said that in the past year, the White House has walked back its key demand that Iran completely shut down its nuclear program.

"A year ago the Obama administration demanded the benefit of the doubt, and promised that it would bring home a deal that would permanently shutter Iran’s nuclear program," said the source, who declined to be named out of fear of offending the White House. "Now the president himself has declared that Iran will be allowed a full-scale nuclear program in 10 years. He’s putting the mullahs on the glide path to a bomb. What happened?" 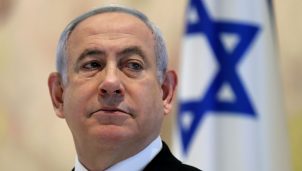