CNBC Asks Facebook Fans: ‘Do You Agree With ISIS?’

The CNBC Facebook page asked its followers on Tuesday whether they agreed with the terrorist organization the Islamic State.

"Do you agree with ISIS?" asked the post, which linked to a story with the headline "Islamic State says US ‘being run by an idiot.'"

"You [the U.S.] are bankrupt and the signs of your demise are evident to every eye," said ISIS spokesman Abi al-Hassan al-Muhajer in a new recording. "There is no more evidence than [that] you being run by an idiot who does not know what Syria or Iraq or Islam is." 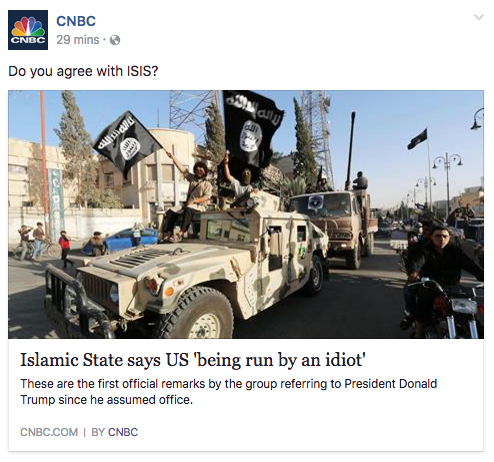 Most recently, ISIS claimed responsibility for the March terrorist attack on the British Parliament. "The perpetrator of the attacks yesterday in front of the British Parliament in London is an Islamic State soldier and he carried out the operation in response to calls to target citizens of the coalition," they said in a statement.

Needless to say, most of the Facebook comments do not agree with ISIS. "Our ‘idiot…' is going to wipe you off the face of the earth," reads the top comment, left by a supporter of President Donald Trump.

Even Trump critics weren't about to give ISIS any credit. "Just pointing out the obvious does not make them any smarter," one Facebook user wrote.