China’s most powerful military leader, in an unusual public statement, last week ordered military forces to prepare for combat, as Chinese warships deployed to waters near disputed islands and anti-Japan protests throughout the country turned violent.

Protests against the Japanese government’s purchase of three privately held islands in the Senkakus chain led to mass street protests, the burning of Japanese flags, and attacks on Japanese businesses and cars in several cities. Some carried signs that read "Kill all Japanese," and "Fight to the Death" over disputed islands. One sign urged China to threaten a nuclear strike against Japan. 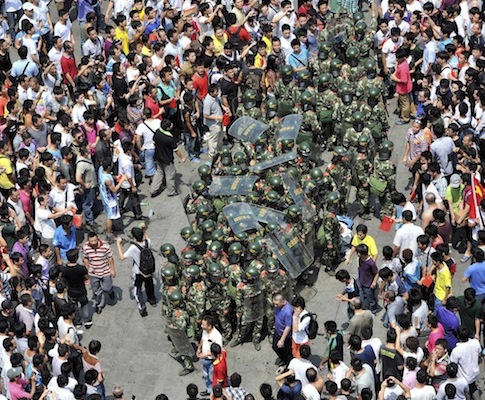 "The message I have tried to convey is we have to urge calm and restraint on all sides," he said, noting any "provocation" could produce a "blow up."

Panetta repeated the U.S. position that it is neutral in the dispute over Japan’s Senkaku islands, a small chain of islets located south of Okinawa and north of Taiwan. But he also reaffirmed the U.S. defense commitment to Japan, a treaty ally.

"We stand by our treaty obligations," Panetta said, echoing a similar commitment made during a 2010 standoff between Beijing and Tokyo over the Senkakus. "They're longstanding, and that has not changed."

China claims the islands as its territory and calls them the Diaoyu islands.

Xu said during a visit to military units near Taiyuan, in the northern province of Shanxi, "efforts should be made to ensure that the military is capable of resolutely performing its duty to safeguard the country's national sovereignty, security, and territorial integrity whenever it is needed by the Party and the people."

A U.S. official said the PLA’s most senior political general rarely makes such direct appeals to troops to prepare for combat.

Panetta told reporters en route to Japan, the first stop on a three-nation visit to Asia, "The United States does not take a position with regards to territorial disputes."

In 2010, then-Defense Secretary Robert M. Gates invoked the U.S.-Japan defense treaty when tensions between China and Japan increased over Tokyo’s arrest of a Chinese fishing captain who rammed his boat against a Japanese coast guard vessel in waters near the Senkakus. Gates said the United States would "fulfill our alliance responsibilities" toward Japan.

Japan’s Coast Guard announced on Sept. 14 that six Chinese maritime patrol vessels sailed into Japanese-controlled waters near the Senkakus and the vessels ignored Japanese warnings for the ships to leave the area.

Other reports from China on Monday showed a convoy of hundreds of Chinese fishing vessels sailing toward the disputed islands.

The six Chinese ships entered Japanese waters near the island on Friday, and ignored Japanese coast guard orders for them to vacate what it said was its territorial waters.

The Chinese Foreign Ministry confirmed that six of its surveillance ships had entered the waters near the islands.

On Monday, President Obama criticized GOP nominee Mitt Romney for his attack on the administration for being soft on China through its weak response to China’s trade and currency policies.

The Chinese maritime warships near the Senkakus were reported last week by Xinhua as "routine patrols" near the islands to "assert the country’s sovereignty and protect fishermen."

"The Diaoyou Islands and their affiliated islets have been China's inherent territory since ancient times, and their surrounding waters are China's traditional fishing ground," the report said.

A classified Chinese government map from 1969 that was obtained by Japan’s government shows Beijing had labeled the islands as "Senkaku," their Japanese name, and thus confirmed their control by Tokyo. The map, which was viewed by the Free Beacon, also had a dividing line south of the islands showing that they fall within Japanese territory.

"While the world’s attention was turned to other crises, including Iran’s nuclear program and concerns over the faltering Euro, China has upped the ante, playing the role of a schoolyard bully towards its maritime neighbors," Ros-Lehtinen said.

"From one end to the other of the South China Sea, Beijing has increased both in belligerence and bellicosity."

Ros-Lehtinen said the United States, through the Navy, will stand by friends and allies in the region.

The Florida Republican said China is seeking to control the South China Sea and other coastal waters and sealanes because they are "central to the Chinese communist mandarins’ aspirations to re-establish the Middle Kingdom as the dominant power in Asia."

"Whoever controls these sea lanes can dominate Asia—and beyond—by choking off that commerce and oil shipments to the major stakeholders in the Asian economic miracle," she said.

Chinese efforts to dominate the western Pacific are increasing the possibility of naval clashes, Ros-Lehtinen said.

"Other global crises must not distract from our vital national interests in the South China Sea and the western Pacific," she said during a hearing.