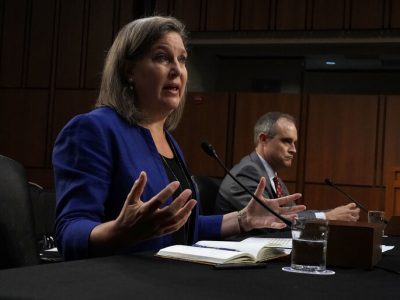 Trump on Iran's Embassy Attack: 'This Was the Anti-Benghazi'

White House emails reviewed by ABC News suggest the edits were made with extensive input from the State Department. The edits included requests from the State Department that references to the Al Qaeda-affiliated group Ansar al-Sharia be deleted as well references to CIA warnings about terrorist threats in Benghazi in the months preceding the attack.

That would appear to directly contradict what White House Press Secretary Jay Carney said about the talking points in November.

One of the edits proposed by State Department spokeswoman Victoria Nuland specifically cited potential Congressional pressure over a paragraph that detailed previous attacks:

'The Agency has produced numerous pieces on the threat of extremists linked to al-Qa’ida in Benghazi and eastern Libya. These noted that, since April, there have been at least five other attacks against foreign interests in Benghazi by unidentified assailants, including the June attack against the British Ambassador’s convoy. We cannot rule out the individuals has previously surveilled the U.S. facilities, also contributing to the efficacy of the attacks."

In an email to officials at the White House and the intelligence agencies, State Department spokesman Victoria Nuland took issue with including that information because it 'could be abused by members [of Congress] to beat up the State Department for not paying attention to warnings, so why would we want to feed that either? Concerned …"

Trump on Iran's Embassy Attack: 'This Was the Anti-Benghazi'