New guidance from the Bureau of Alcohol, Tobacco, Firearms, and Explosives (ATF) could put millions of Americans in legal jeopardy.

The ATF published a notice Thursday that could require millions of AR-15 pistols and similar firearms—which are designed with braces that strap on to a shooter's forearm—to be either registered, turned in, destroyed, or dismantled. But the standards laid out for determining the devices' legality, such as caliber or weight, provide no objective measures, and the agency said it may also use undisclosed factors to judge the legality of the devices.

The agency conceded in the notice that some pistol braces are legal and should not be subject to the registration or destruction requirement. It said, however, that it could not provide a blanket determination for which pistols, or braces with which they're often equipped, are legal and said it would have to examine each gun "on a case-by-case basis." That means owners of the vast majority of the estimated three to four million AR-15 pistols and similar firearms may have to register with the ATF.

Second Amendment advocates were up in arms over the proposed rule, saying the uncertain legal status could destroy several businesses that make pistol braces and harm the gun industry. Erich Pratt, senior vice president of Gun Owners of America (GOA), said the subjective nature of the guidance shows that the "ATF has gone off into the deep end."

"GOA will rally the grassroots to fight these regulations, and if they eventually go into effect, we will commence immediate legal action to protect gun owners," Pratt said in a statement.

The controversy stems from how federal law distinguishes between short-barrel rifles and shotguns, both of which must be registered and require a $200 tax stamp, and pistols that do not require either. The key component is whether a firearm is designed to be pressed against the shooter's shoulder. Since 2012, the ATF has classified several guns with braces designed to strap to a shooter's forearm as pistols. The agency's Boston field office called that interpretation into question in August after sending a cease and desist letter to one manufacturer. The agency ordered a review in October following intervention from the White House.

Neither the ATF nor the White House responded to a request for comment.

The notice said the agency plans to waive the $200 tax for those registering the affected firearms during a grace period to be announced later. The public has two weeks to offer comment on the ATF notice before it goes into effect. 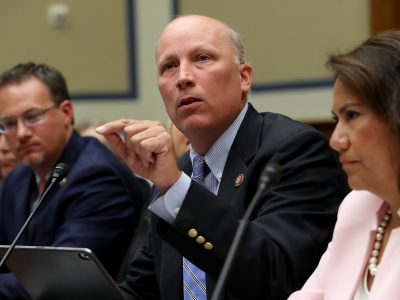