Some in the GOP have begun to push back at what they see as the media’s false narrative of a strong recovery that bodes well for President Obama’s reelection prospects. Recent wall-to-wall coverage of Sandra Fluke and the controversy over taxpayer-funded contraception, these Republicans argue, is a sign that Democrats and the media are more interested in helping the president win reelection than in reporting on the millions of Americans still suffering in the worst post-recession recovery since the Great Depression.

The Bureau of Labor Statistics reported on Friday that unemployment remained steady at 8.3 percent in February, as the economy added 227,000 jobs.

"The economy is getting stronger," Obama told supporters at a rally in Virginia that day. "It gives me confidence there are better days ahead."

"Millions of families continue to feel the pain of the sluggish Obama economy and the rising cost of gas, groceries, and healthcare," Reince Priebus, chairman of the Republican National Committee, said in a statement. "They are still waiting on President Obama to keep his promise of an economic recovery."

"We got good news, but we didn’t get such strong news to hold out a promise to those Americans that are looking for work and are discouraged," Douglas Holtz-Eakin, a former Congressional Budget Office director, said on a conference call hosted by the Republican National Committee. "I think that promise becomes the heart of the economic performance of the rest of the year. What confidence will people have in the president and his policies?"

There is ample evidence, Republicans point out, to refute the claim that Obama’s policies have done anything to earn such confidence.

The U.S. economy, for starters, remains embroiled in the longest jobs recession since the Great Depression. Forty-nine months have passed since the country hit peak employment in January 2008, surpassing the previous record of 47 months following the post-9/11 recession in 2001, during which unemployment never rose above 6.3 percent. By contrast, February marked the 37th consecutive month the unemployment rate has exceeded 8 percent. That is the longest streak in the post-World War II era.

Amid record high gas prices, meanwhile, the Obama administration continues to struggle to come up with a coherent energy policy. The only concrete policy proposal Obama has suggested as a way to stem the rising price of gas has been the elimination of federal subsidies for oil companies, although it is unclear how doing so would achieve that objective.

Republicans, along with business and labor groups, continue to pressure the administration to approve construction of the Keystone XL pipeline, which would carry oil from northwest Canada to the U.S. gulf coast. The project would create an estimated 20,000 jobs, a figure that one Democratic congresswoman called "not that many."

However, despite significant bipartisan support for the pipeline in Congress, the president has repeatedly rejected the proposal, a move that is the result of his pandering to radical environmental groups, critics say.

Obama personally lobbied Senate Democrats last week to reject a GOP amendment that would have forced the administration to approve the pipeline.

Brian Darling, senior fellow for government studies at the Heritage Foundation, said the president’s reluctance on Keystone is so egregious in the face of rising gas prices that Republican lawmakers should force a vote on the pipeline every week.

"They need to show that this administration doesn’t care about gas prices," Darling told the Washington Free Beacon.

Obama’s energy secretary, Steven Chu, has called the administration’s commitment to lower gas prices into question on a number of occasions. In testimony before Congress last month, Chu told lawmakers it was not the administration’s goal to reduce gas prices. Chu has also argued that federal government should "figure out how to boost the price of gasoline to the levels in Europe."

The labor force participation rate—63.9 percent in February—remains at a near-historic low. Individuals who have stopped looking for work do not count toward the unemployment rate, masking the true extent of the jobs crisis.

Federal Reserve Chairman Ben Bernanke told members of Congress last month that the current unemployment rate as calculated by the administration "no doubt understates the weakness in the labor market in some broad sense."

Analysts at the Senate Budget Committee estimate that if labor force participation were to return to its January 2009 level of 65.7 percent, the unemployment rate would jump to nearly 11 percent and the economy would need to add more than 430,000 jobs each month just to bring unemployment below 8 percent by the end of the year.

The BLS also recorded no change in the number of long-term unemployed. The number of individuals looking for work for more than six months, about 5.4 million, is double the amount from when Obama took office in 2009, as is the average number of weeks (40) a worker is unemployed.

As with long-term unemployment, the BLS recorded no change in the underemployment rate. More than 8 million Americans are currently working part-time jobs, despite wishing to work full-time.

Gallup calculated the total underemployment rate, which combines unemployment with underemployment, to be 19.1 percent in February, and steadily rising over the last several months.

According to the BLS report, although white unemployment dropped slightly (0.1 percent) to 7.3 percent, minority unemployment continued to rise.

Black unemployment rose half a percentage point to 14.1 percent in February, while the Hispanic unemployment rate jumped 0.2 percent to 10.7 percent.

One month after being sworn into office in 2009, Obama promised to cut the federal deficit in half by the end of his first term, a pledge he reiterated as recently as February 2011.

Obama has not even come close to meeting that commitment, something he himself has acknowledged. In his fiscal year 2013 budget, the most expensive in United States history, the president requested $6.7 trillion in additional deficit spending over the next decade.

"We need to control the debt explosion," Holtz-Eakin said on the conference call. "The president, instead of cutting the deficit in half as he has promised, has run trillion dollar deficits and continues to do so at this time."

President Obama has accumulated more debt, approaching $5 trillion, than all previous presidents up to George H.W. Bush combined. By the end of Obama’s first term, the government will have added about $6.4 trillion to the national debt.

U.S. debt per capita, about $45,000, is higher than in many of Europe’s most financially distressed countries, including Greece, which Fitch Ratings has just downgraded to "restricted default" status.

Americans born today will owe more than $1.5 million each to pay off the national debt, which is currently about $16 trillion, and growing.

The Obama administration sold its 2009 stimulus package as necessary to prevent unemployment from rising above 8 percent. 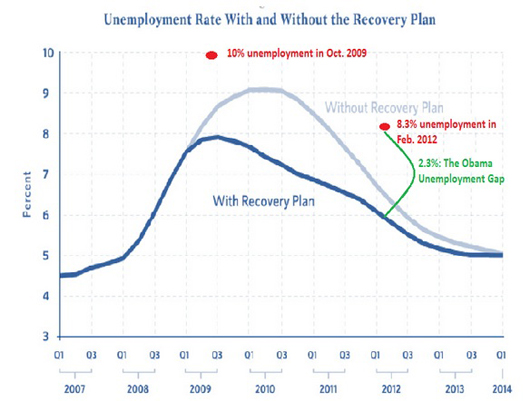 The unemployment rate has averaged 9.4 percent since the president signed the stimulus into law in February 2009.

Using the administration’s 2009 estimates and current data about the size of the labor force, Senate Budget Committee staff economists calculate that nearly 4 million more people are unemployed than would be had the White House prediction held true. 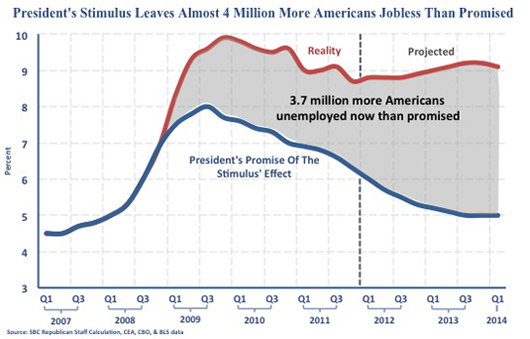 "The economy is not growing at pace it should be growing, gas prices are going through the roof," Darling, the Heritage scholar, said. "Average Americans aren’t living better now than they were four years ago, they’re living worse. That’s not something that I would want to run on." 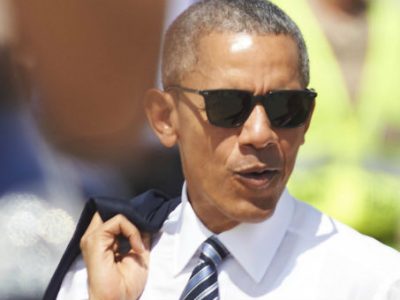