Trump Issues Order to Crack Down on Visa Overstays

President Donald Trump is ordering the Departments of State and Homeland Security to take all steps in their power to reduce the currently hundreds of thousands of people who overstay temporary visas every year.

A presidential memorandum, issued Monday afternoon, instructs the secretaries of State and Homeland Security to outline within 120 days recommendations for how to reduce visa overstays, especially from the 28 countries from which more than 10 percent of arrivals overstay their visas. The memorandum also instructs the secretaries to take all steps currently in their power to cut visa overstays, and orders a review of the visa waiver program.

The memorandum instructs DHS and State to take all available actions, but also makes some recommendations of possible courses. These include implementing a bond system, whereby arrivals from high-overstay countries are obliged to put up collateral upon entry. They also include a consideration of the president's powers under the Immigration and Nationality Act, including sections 215 and 212(f).

Although the administration is focused on high-overstay countries, it will also pursue a review of all temporary visas, including student visas and visas for countries which benefit from the Visa Waiver Program.

Every year, millions of people enter the United States on temporary visas: 54 million in 2018, for example. Each year, some fraction of those people choose to remain in the country past the period of their visa expiry, either leaving after they are expected to or remaining in the country indefinitely. Last year, the Department of Homeland Security estimates, 96,000 people left late (which can incur a ten-year bar from reentry), and 569,000 are thought to have remained in the country.

For comparison, 521,000 people were apprehended illegally crossing the border in 2018, up from 415,000 in the preceding year. In other words, visa overstays outpace illegal border crossing as the leading cause of illegal immigration to the United States.

Although many thousands of people regularly overstay their visas, not all countries are equally likely to send overstayers. The administration has identified 20 countries with an overstay rate of greater than 10 percent. The most frequent offender, Djibouti, saw 180 overstays out of 403 arrivals on B1 and B2 ("business" and "pleasure") visas. 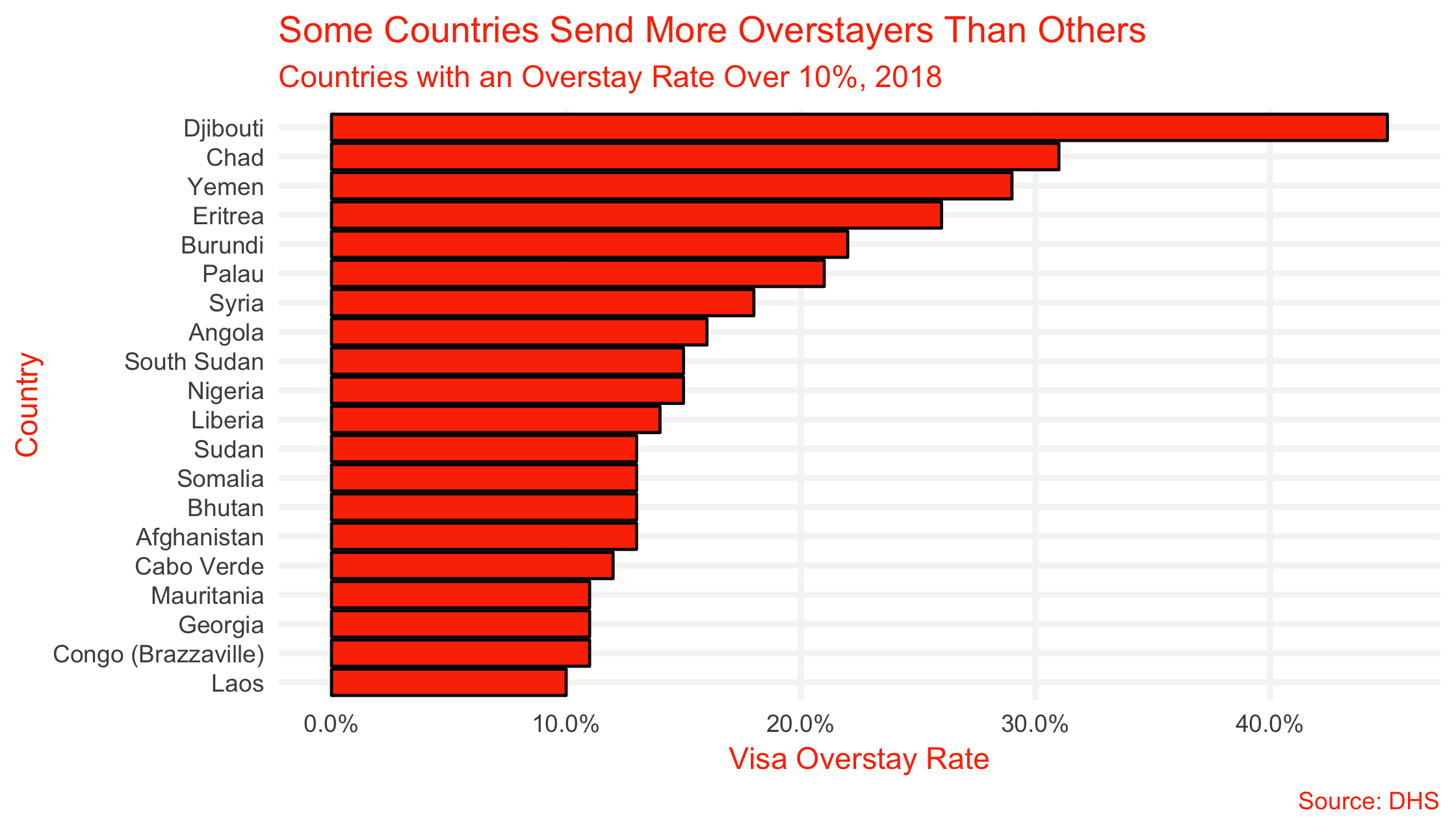 Individuals overstaying their visa can pose a national security risk, as with 9/11 hijacker Nawaf Al-Hazmi. However, as with other individuals who choose to illegally immigrate, they also place a burden on public resources and the U.S. labor market.

As such, visa overstay has been a major priority of the Trump administration. The total number of overstayers fell between 2017 and 2018 by about 180,000. Monday's memorandum aims to build on that momentum.