The high-dollar progressive donors, who each vow to direct at least $200,000 in funding to approved left-wing groups of the alliance, are currently gathered at the posh La Costa Resort located in Carlsbad, Calif., for its three-day fall investment conference to plot their 2018 "resistance" and game plan.

The Free Beacon, who appears to be the only members of the media on site covering the conference, has obtained internal documents meant only for attendees that detail the conference's agenda and those who are currently at the gathering. Janell Ross, a Washington Post reporter, is allegedly at the summit, but is listed as being on a "getting the economic narrative right" panel at the conference.

Following publication of the story on early Friday morning, there has been a noticeable increase in security personnel at the resort. These reporters noticed that the original itinerary also appears to have been altered.

Diners also now have to identify their names and room numbers upon sitting down at the restaurant, which was not required yesterday, as these reporters discovered this morning. 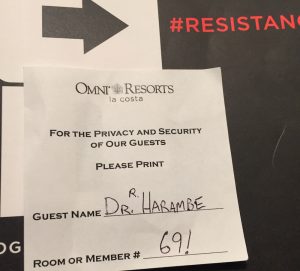 The DA's agenda, titled "Beyond #Resistance: Reclaiming our Progressive Future," establishes "participation guidelines" that include guests not sharing any of the members' names with the press or on social media. It also asks attendees to refrain from leaving any sensitive materials behind.

Friday's headliners include liberal billionaire George Soros, who was introduced by a video message from Sen. Kamala Harris (D., Calif.), and House Democratic Minority Leader Nancy Pelosi, who is scheduled to speak at the network's dinner. Sen. Amy Klobuchar (D., Minn.) also delivered a video message to the group.

Tom Steyer, a billionaire environmental activist and past prominent member of the alliance, who is currently in the midst of launching a campaign geared at impeaching President Donald Trump, does not appear to be at the gathering. Pelosi, who is in attendance at the summit, previously lambasted Steyer for the campaign.

However, Sky Gallegos, the political director of NextGen Climate, Steyer's group, is listed in the group's documents as having participated in a lunch program Thursday on "mobilizing the electorate for a progressive future."

Below is the original schedule and attendees at the conference.