A rioter who participated in violent protests during President Donald Trump's inauguration in January has been sentenced to four months in prison.

Dane Powell was the first defendant to be sentenced in the District of Columbia Superior Court for felony charges after pleading guilty, Buzzfeed reports. Powell's attorneys had argued for no jail time while prosecutors requested six months in prison. Powell admitted breaking store windows in Washington, D.C., and throwing rocks and other objects at police officers, according to the report.

Judge Lynn Leibovitz, who sentenced Powell, is presiding over all of the rioting cases from the inauguration. More than 200 people were charged with rioting on January 20 in the nation's capital as Trump took office.

During the sentencing, Leibovitz said that she put "great weight" on Powell's decision to plead guilty. Leibovitz additionally said that Powell's acceptance of responsibility is why she "sharply" reduced the sentence from what it would have been. Prosecutors claim that Powell was one of the more violent protesters that day and had assaulted a police officer.

The rest of the trials are scheduled to begin in the fall. 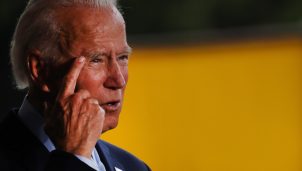