The National Institutes of Health (NIH) is spending nearly $5 million to get hipsters to quit smoking by starting "commune" dance parties in bars across California.

Researchers at the University of California, San Francisco (UCSF) are using taxpayer dollars to bring anti-tobacco marketing into bars by selling posters and t-shirts, including those that deride the views of neoconservatives, saying the political philosophy is as bad as world hunger.

"In our prior research, we identified a high-risk subpopulation of young adults in San Diego, CA: the ‘hipster’ subculture, a group focused on the alternative music scene, local artists and designers, and eclectic self-expression," the grant explained. "We developed a yearlong pilot social branding intervention to decrease smoking among this group, using social events and social leaders to promote a strong nonsmoking lifestyle."

Pamela Ling, a professor at UCSF School of Medicine, is leading the project. Ling was the "medical student who got her way" in the 1994 season of MTV’s "The Real World" before becoming a doctor.

"Saying ‘Smoking is bad for you' isn't relevant to them," Ling told the University. "But they do care about self-expression and social justice."

For the NIH study, Ling partnered with Rescue Social Change Group, a company that tries to alter youth behaviors through social branding, to start "the Commune."

The group holds events, known as "Commune Wednesdays," every month at bars in San Diego, San Francisco, and Burlington, Vt., trying to appeal to hipsters through artwork, alternative bands, and Pabst Blue Ribbon.

The Commune describes itself as a "movement of artists, designers, musicians, and people that take a stand against tobacco corporations and their presence in the scene."

"We have rejected big corporations for a long time, like Big Music that hinders creative freedom and Big Fashion that runs sweatshops," the group’s website, "Join the Commune," explains. "Our stand against Big Tobacco is even more important, since the industry contributes to things like world hunger, deforestation, and neo conservative policies."

"Even worse, the tobacco industry’s pervasive marketing in the art and music scene has manufactured an image that people like us smoke," it continued. "So now young people that look up to us believe that smoking is more important than creativity, music and self-expression to fit in. We’re out to change this distorted image of the scene."

The group sells t-shirts and posters with anti-tobacco messages. One poster offers alternatives to hipsters wanting to take a smoke break, including "riding your fixed gear bike," "styling your sweet mustache," "practicing your next Instagram pose," "listening to your favorite band that no one else has heard of," and, surprisingly, "taking a refreshing shower."

"Altria (makers of Marlboro) is the third largest political contributor in the U.S.," reads a poster fashioned off a campaign style ad. "Millions of dollars from cigarette consumers are used to get conservative politicians elected. The tobacco industry’s millions support politicians who vote against equal rights, women’s right to choose, and environmental protections"

"Your money. Their policies. You decide," it said.

Another depicts nukes flying out of a cigarette box that is branded "New World Order." 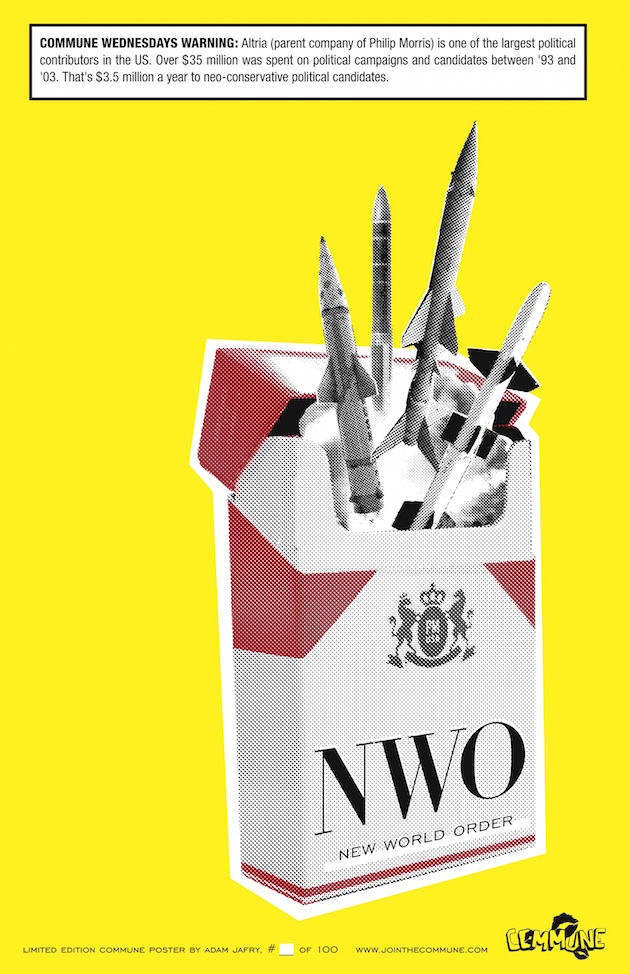 "Altria (parent company of Philip Morris) is one of the largest political contributors in the U.S.," the poster said. "Over $35 million was spent on political campaigns and candidates between ’93 and ’03.

The website also features testimonials from local artists, like the band "BRUIN" (who wanted to be called "DEWDS" but it was taken), who says, "Fuck big tobacco in its stupid fucking ass."

"Band New Mexico" says, "Its [sic] important to take whatever stand you can against ANY big industry," while "Industry Bastards," a clothing company, explains that they also take a "firm stand against the films of Zac Efron."

A gallery of past events shows hipsters in flannel drinking PBR, playing music, and holding up signs that read, "refuses to smoke." The Commune produces a quarterly zine, and is holding a pre-Thanksgiving dance party on Wednesday.

Ling said she conducts her research—about 1,000 surveys a year—at the bar to see if the intervention is working.

"What we actually found was that the best way to do the evaluation is to go to the bar, and do the survey in the bars with the people you’re really trying to reach," she said.

The project first began in 2011, and Ling says hipster smoking rates have dropped 10 percent. Additional research found that lots of young people are social smokers, and tried to determine whether patrons of gay bars in Las Vegas were exposed to second hand smoke.