The Food and Drug Administration is spending $36 million on an anti-chewing tobacco advertising campaign targeted at white male teenagers in the midwest.

The federal agency announced Tuesday it is expanding its "Real Cost" anti-tobacco campaign to "educate rural, white male teenagers" and convince them to stop dipping.

"Smokeless tobacco use is culturally ingrained in many rural communities," the FDA said. "For many, it has become a rite of passage, with these teenagers seeing smokeless tobacco used by role models, such as fathers, grandfathers, older brothers, and community leaders."

The campaign will run television, radio, and print advertisements, as well as put up public signs and billboards and post on social media.

An FDA spokesperson told the Washington Free Beacon that the total cost for the campaign is $36 million, which will be financed through taxes on tobacco manufacturers. Paid ads will cost $20 million, and the remaining budget will cover "research, strategic planning, creative development, and contract management."

The agency is also partnering with two dozen minor league baseball teams in the midwest that will host anti-chewing tobacco events and feature advertisements from the campaign.

"Amplification of messaging from the campaign will take place at 25 Minor League Baseball stadiums throughout this summer using a variety of efforts, including sponsoring in-stadium events, the placement of print ads, running of television ad spots, and opportunities for fans to engage with players who support the FDA’s efforts on smokeless tobacco," said Tara Goodin, an FDA spokesperson.

The list of minor league clubs participating in the campaign includes the Albuquerque Isotopes, the Fargo-Moorhead Redhawks, the Traverse City Beach Bums in Michigan, the Sioux Falls Canaries, and the Burlington Bees, an Iowa farm team for the Los Angeles Angels.

Chewing tobacco has been banned at ballparks in Los Angeles, San Francisco, and Boston, including Fenway Park, and major leaguers can face $250 fines and "are subject to discipline" from Major League Baseball’s Commissioner Rob Manfred if they dip during games.

ESPN reported that signs are now posted in Fenway with a phone number so individuals can call to report on other fans they see chewing tobacco to "alert security."

The FDA provided an example of one of its new campaign ads, which features a man at a bowling alley with a can of chewing tobacco in his back pocket. 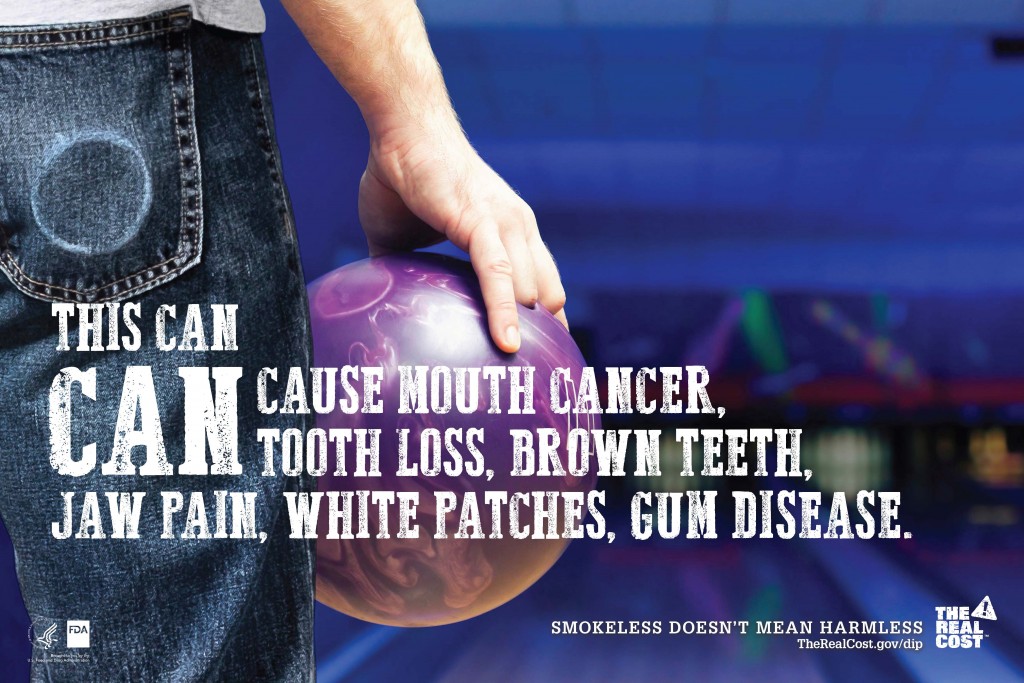 "Not only is the target audience using smokeless tobacco at a high rate, but many do not fully understand the negative health consequences of their actions," said Mitch Zeller, J.D., director of the FDA’s Center for Tobacco Products. "In communities where smokeless tobacco use is part of the culture, reaching at-risk teens with compelling messaging is critical to help change their understanding of the risks and harms associated with smokeless tobacco use."