Americans were diagnosed with 2.3 million cases of chlamydia, gonorrhea, and syphilis in 2017, according to new data from the Center for Disease Control. 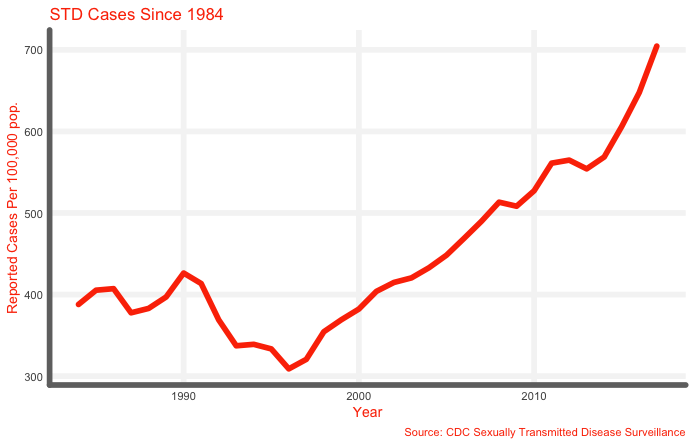 These statistics represent a serious reversal of fortune for efforts to fight STDs, according to the CDC official who presented them.

"We are sliding backward," said Jonathan Mermin, M.D., M.P.H, director of CDC's National Center for HIV/AIDS, Viral Hepatitis, STD, and TB Prevention. "It is evident the systems that identify, treat, and ultimately prevent STDs are strained to near-breaking point."

Breaking the rate of STD infections down by kind of disease, however, paints a somewhat different picture. Using data from 1984 onwards—the first year CDC tracked diagnoses of all three common STDs—chlamydia rates eclipse gonorrhea and syphilis, the latter of which has risen from a low of two cases per 100,000 two decades ago to about nine cases per 100,000 today. 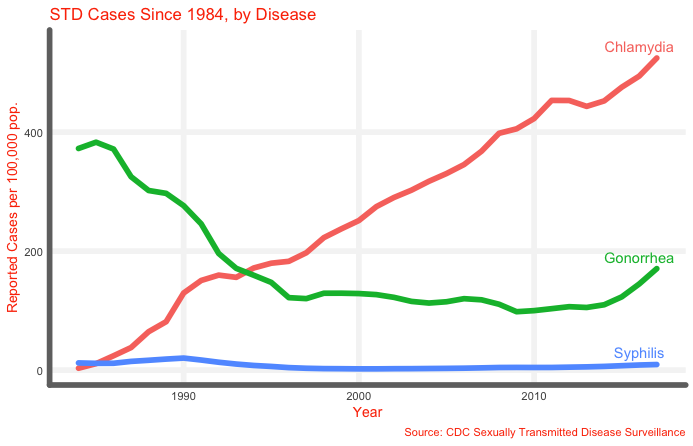 This does not mean that rising syphilis rates are not a public health problem. Men who have sex with men (MSM, a stated-sexual-preference-neutral term used by the CDC and other public health organizations) account for a majority of all syphilis diagnoses over the past five years, and at least 70 percent of those cases where the gender of the sex partner is known. However, MSMs are at an elevated risk for STDs generally, accounting for just four percent of the population but 56 percent of Americans living with HIV.

In other words, public health interventions may be more effective if they target diagnosis, prevention, and safe sex practices among MSMs than raising concerns about the general population.

A similar population-specific trend emerges among chlamydia sufferers, 45 to 50 percent of whom are young women in their late teens to early 20s. The disease also appears disproportionately among men in the same age group, although less frequently than among young women.

The chlamydia trend—more or less linearly increasing since CDC began tracking—also highlights another possible explanation for the overall increase in STD rates: better surveillance and detection. A study from the CDC using data from the National Health and Nutrition Examination Survey, a nationally representative sample of Americans ages 14 to 39, indicated the rate of chlamydia infection fell from 1999 to 2008, and did not change significantly between 2009 and 2012.

Yet the chlamydia diagnosis rate rose steadily through that period, indicating that doctors may have identified more chlamydia, rather than there being a greater rate of chlamydia infection in the population.

That leaves gonorrhea, the uptick in which may be more concerning. Gonorrhea diagnoses rose steadily from the late 1950s to the mid 1970s, hitting more than 400 cases per 100,000 Americans. But it then fell, almost continuously, until the mid-2000s, which is when the current uptick began.

Unlike syphilis and chlamydia, gonorrhea does not predominate among any one subset of the population, although it does appear more among young people than the elderly. 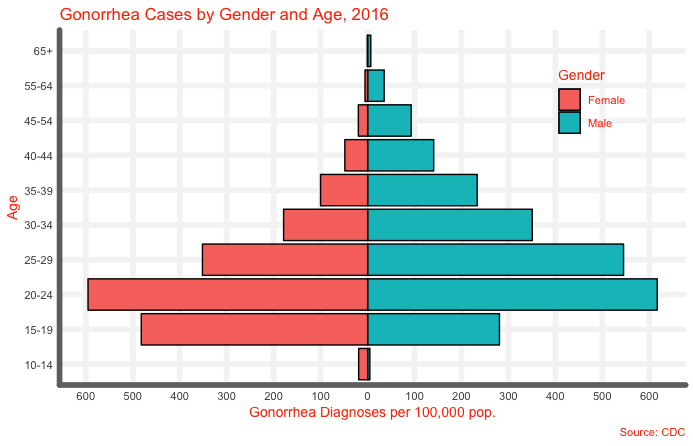 The CDC is especially concerned about the rise of strains of antibiotic resistant gonorrhea. "Gonorrhea has become resistant to nearly every class of antibiotics used to treat it, except to ceftriaxone, the only remaining highly effective antibiotic to treat gonorrhea in the United States," the organization noted in its press release.

To forestall ceftriaxone resistance, in 2015 the CDC began recommending doctors dose gonorrhea patients with a combination of the drug and azithromycin. But lab tests are now seeing an increase in azithromycin-resistant gonorrhea, which experts fear could cross with ceftriaxone-resistant versions of the disease to produce an untreatable strain.

"We expect gonorrhea will eventually wear down our last highly effective antibiotic, and additional treatment options are urgently needed," said Gail Bolan, M.D., director of CDC's Division of STD Prevention. "We can't let our defenses down—we must continue reinforcing efforts to rapidly detect and prevent resistance as long as possible."