"Do not negotiate! We must keep fighting!" declared Abbas Hamideh, co-founder of Al-Awda, The Palestine Right to Return Coalition, to the few hundred pro-Palestinian activists gathered before him in front of the White House on Sunday.

They were there to protest the American Israel Public Affairs Committee, widely known as AIPAC, America’s most influential pro-Israel lobbying group, on the first day of its annual policy conference at the Walter E. Washington Convention Center in Washington, D.C.

Beyond AIPAC, the purpose of the protest was to "advocate for the right of Palestinians all over the world." To this end, the protestors were calling for the creation of a new Palestinian state stretching from the Jordan River in the east to the Mediterranean Sea in the west, an area within which the entire state of Israel is located, and for all Palestinians around the world to have a right to return to this land. 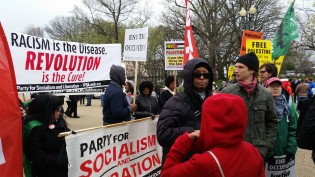 Al-Awda hosted and organized the protest along with co-sponsor the ANSWER Coalition, an anti-war group.

The protesters first gathered at the White House at noon to organize and hear various speakers before marching to AIPAC conference.

"We have Christians—the real ones—[and] Jews, the real Jews," Hamideh told the crowd with a smile while speaking of its diversity.

He then asked, "Are you ready to give up an inch on Palestine?" to which the crowd responded, "No!" Hamideh’s question is similar to a statement on his Twitter page in which he declares, "I don’t compromise on one inch of Palestinian land!"

Some of the most noticeable aspects of the protest were the many provocative signs that protestors held, making their message evident to onlookers.

"The problem isn’t just AIPAC," one speaker said. "The problem is the White House, the House of Representatives, the Senate, who write blank checks to Israel for $4 billion a year … which goes to missiles and bombs and checkpoints and apartheid."

Presidential candidates did not escape the protestors’ criticisms either. Not only were there anti-Donald Trump signs at the protest and speakers who were calling him racist, but Hillary Clinton also received criticism from the crowd for being too close to big banks and oil companies. 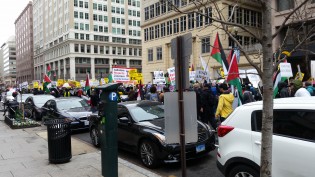 The protest appeared to co-opt a political left-wing agenda with its focus on the Israeli-Palestinian conflict. One man, for example, was handing out fliers that, in his own words, "explain Israel’s genocidal and apartheid policies and actions," but they focused as much on advocating for people to vote Socialist candidates into office.

At 1:30 p.m., the protestors mobilized into formation and began marching to the convention center. Police blocked off roads on the way, and one masked protestor spotted two police officers on horseback and went right up to them, shouting, "You know, millions of people will one day come back and reclaim this city! You will have to make a decision whether you are with them or against them! Mark my words!"

After several minutes and much attention from onlookers filming the march with their phones, the protestors arrived at the convention center, where they shouted "Shame on you" at any individuals who walked in or out of the AIPAC event. A few protestors pointed and yelled "terrorists" at anyone coming or going.

The leader of the protest at the convention center was Sabry Wazwaz, an American Palestinian filmmaker and activist. Wazwaz told the protestors to "look at those faces in those windows. They are scared. This is what justice looks like."

Wazwaz went to great lengths to connect Palestinian resistance with black resistance in the United States, declaring that "Palestinians stand with the Back Lives Matter movement" and compared Israel’s presence in the Palestinian territories to "the American occupation of the black community."