A Georgia Democrat, who has been accused of carpetbagging, used a Tennessee phone number to alert constituents of a coronavirus tele-townhall, according to a voicemail shared with the Washington Free Beacon.

Rep. Lucy McBath (D., Ga.) left a voicemail to constituents of her suburban Atlanta district announcing the townhall Thursday, though she used a phone number with an eastern Tennessee area code. McBath voted in Tennessee as recently as 2016, and her husband was a permanent resident of the state during her 2018 bid to oust former Republican congresswoman Karen Handel. 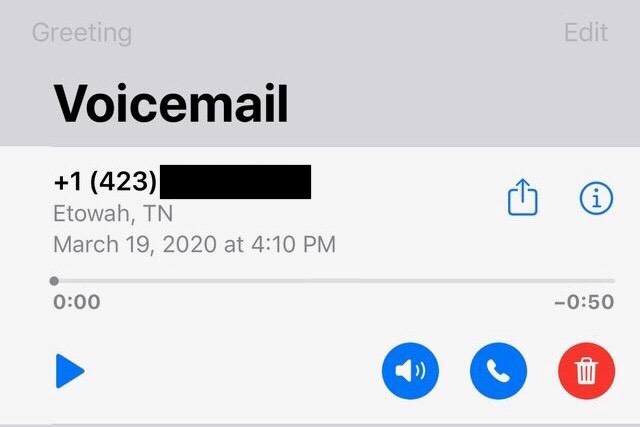 Despite her husband's residence, McBath for nearly two decades claimed a homestead exemption in suburban Atlanta, which allows permanent residents to decrease their property tax liabilities. McBath was ordered to pay back-taxes after a 2019 audit found she did not qualify for the exemption from 2015 through 2018, meaning she was not a resident of Georgia when she was elected to Congress.

McBath's 2018 candidate financial disclosure listed two vehicles registered in Blount County, Tenn., where her husband lived at the time. Though the area code used in McBath's voicemail to constituents—area code 423—does not fall in Blount County, it did until 1999, when state officials decided to split the county from the code's section. Property records indicate McBath's husband lived in the county at the time of the change.

In addition, McBath's husband owned a home in Chattanooga, Tenn., which does use area code 423, as recently as 2017. A relative of McBath currently lives in the home, according to property records.

McBath's office did not respond to a request for comment on why she left the voicemail from the Tennessee phone number. It is unclear if McBath will be holding the tele-townhall from the Volunteer State.

"Hi, this is congresswoman Lucy McBath," the representative said in a voicemail obtained by the Washington Free Beacon. "I'm calling you to invite you to participate in our coronavirus telephone townhall tomorrow." The voicemail did not once mention the state of Georgia.

McBath's residency was often disputed during her 2018 campaign, though she called the charges "baseless." Even after McBath was determined not to be a resident of Georgia in April, she dismissed questions about her residency in a statement to the Free Beacon.

"Lucy has lived in her home in Marietta in the Sixth District since 2008," her campaign said. "During the 2016 presidential cycle … she briefly changed her residency to Tennessee."

After the 2019 audit determined McBath was not a resident of Georgia when she was elected to represent the state, the National Republican Congressional Committee sent the Democrat a Tennessee-themed gift bag to her home in the Volunteer State. McBath signed for the gift on the morning of April 5, 2019. The House of Representatives was in session the previous day.

McBath defeated Handel in Georgia's Sixth Congressional District by just 1 point in 2018. The pair will face off again in November.