Two Democratic senators broke with their party's leadership Thursday to call for immediate funding for a now-depleted program to provide loans to small businesses affected by the coronavirus crisis.

Arizona businesses are counting on us to help them during this emergency. I’m calling on leadership in both parties to get thru this stalemate ASAP – we can’t wait longer. https://t.co/FkzvfixOQg

The Paycheck Protection Program (PPP) ran out of money Thursday, a week after Senate Democrats blocked a Republican effort to provide the program with $250 billion in additional funding. Democratic lawmakers wanted to attach hundreds of billions in funding for state and local governments and for hospitals.

"Our small biz programs need more money now," Schumer wrote. Democrats "actually want to get it into the hands of all who need it."

That's not what's happening when websites are crashing, mom & pop shops and minority businesses are shut out, bigger banks are loaning to fav customers

Other Democratic senators have called Republican efforts to save the program a "political stunt." Sen. Brian Schatz (D., Hawaii) criticized Senate Majority Leader Mitch McConnell (R., Ky.) for trying to replenish the fund but added that lawmakers should do so along with other legislative priorities.

Senators Doug Jones (D., Ala.) and Ben Cardin (D., Md.) accused McConnell of "dumping money" to try to stave off the program's bankruptcy.

Speaker of the House Nancy Pelosi (D., Calif.) claimed her strategy to hold out on funding small businesses was part of her overall goal to be their "champions."

"It’s not that we don’t share the values of small businesses, we do, we have been their champions," Pelosi told reporters Thursday. "But in order for them to succeed, people have to be well, people need to be safe and we need to have state and local [funding]." 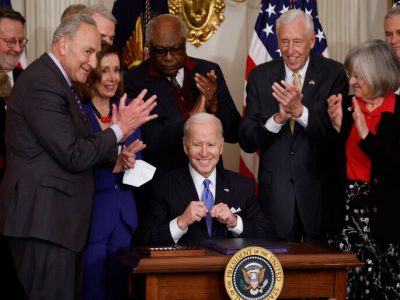 ‘All of Us Knew’: Biden Ally Says Democrats Knew Inflation Was Coming After Spending Bill