Ocasio-Cortez posted a photo to her Instagram story with a caption that said the Black Panthers' Free Breakfast for School Children Program, which began in 1969, created a national push to provide elementary students with free meals.

"Did you know: If you or anyone you know ever benefited from free & reduced school lunch, you’ve likely benefited from the work and legacy of the Black Panthers?" Ocasio-Cortez said in the post. 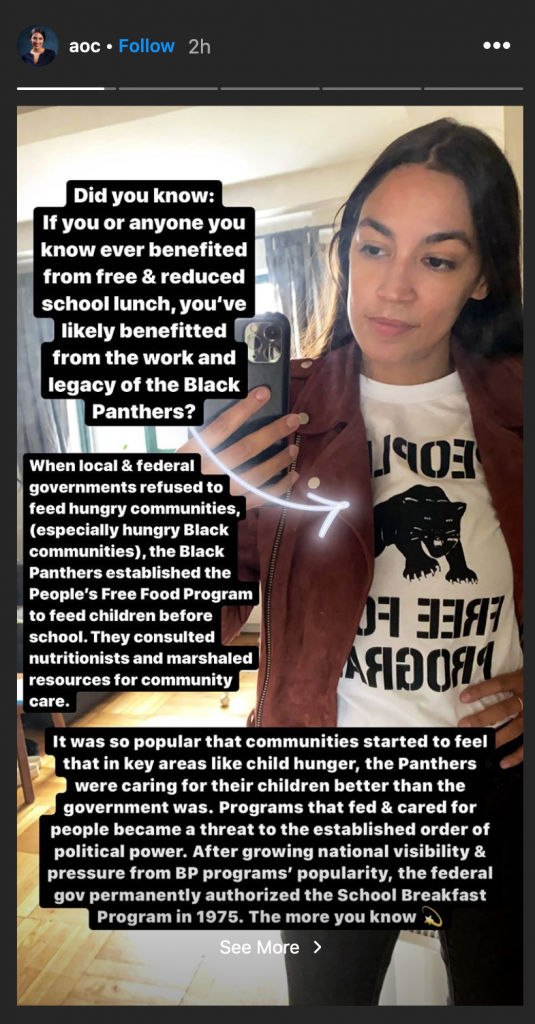 Federal programs to provide both breakfast and lunch to students, especially those in need, began years before the Panthers launched their free breakfast program in 1969. The National School Lunch Program, which provides free or reduced-price lunches to impoverished students, began in 1946 under President Harry S. Truman. And the Child Nutrition Act of 1966 allocated federal funding through Health and Human Services to provide funding to public schools to serve breakfast to students.

The Black Panther Party began in Oakland, Calif., in 1966 and is known for embracing radical ideology—one of its founders said the "Black Power" movement that the group embodied sought to "smash" Western civilization—and repeatedly clashing with police. While civil-rights leader Martin Luther King Jr. and others condemned the group's violent tactics, some, such as Ocasio-Cortez, praise the militant organization for providing free meals and medical services to the black community as the United States desegregated.

The FBI still calls the Panthers a "black extremist" organization that "advocated the use of violence and guerilla tactics to overthrow the U.S. government." Other falsehoods about the Black Panther Party’s role in creating federal assistance programs spread in 2018, when a photo crediting the group for creating the WIC program, which provides food assistance to women and children, circulated online.

Ocasio-Cortez, one of four far-left House Democrats known as "the Squad," was first elected to represent New York's 14th Congressional District in 2018. Since then, she and her fellow leftist "Squad" members have repeatedly squabbled with House Speaker Nancy Pelosi (D., Calif.) and more moderate Democrats.