The Apotheosis of Democracy

Review: 'Religion In Early America' at the National Museum of American History

The religious life of ancient Rome grew and changed in texture and detail as immigrants flowed into the city and her legions returned from the frontiers. Each arrival brought with them new cults and mysteries and myriad sacred objects to fill her temples. But Rome was magnanimous; she could contain multitudes and contradiction so long as the rites of public life were fulfilled. Beneath the cult of her glory all other cults could contest for the souls of her people.

The spoils of just such a contest are enshrined in the National Museum of American History. Its latest exhibit, "Religion In Early America," opened Wednesday, June 28. A well-curated and worthy little display, its placement is almost too obvious in its significance to be believed.

The "Religion in Early America" collection is housed in a small chamber in the middle of the museum's second-floor west wing, itself titled "The Nation We Build Together." That whole wing is a temple of a sort, and in it the relics and artifacts of America's religious heritage seem as much the plunder of The Nation as the nation's patrimony. George Washington sits enthroned at its entrance, robed as a god of liberty and democracy. At his right hand is another larger exhibit that gives the key to what we are seeing: It is the "Hall of Democracy," and as if to beat you over the head it is also sealed as "American Democracy: A Great Leap of Faith" on an enormous campaign button. 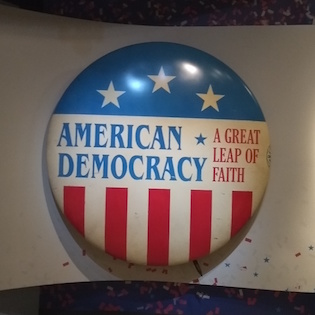 Of course, probably none of this is deliberate. "Religion in Early America" is a tastefully done display sponsored by Ambassador Nicholas F. Taubman and Mrs. Eugenia L. Taubman, with the Foundation for Religious Literacy and H. Bruce McEver. It is arranged geographically, a graceful alternative to chronology or traditions, meaning it can be entered from both sides for a pilgrimage up or down the Atlantic. The impressive collection ranges from the New England north's 1640 Bay Psalm Book—first book in English printed in North America—to the Virginia south and Thomas Jefferson's Bible. "Using a pen knife and glue, Jefferson crafted a condensed version of the New Testament in keeping with the Spirit of the Enlightenment," reads its label.

But in a very real sense "Religion in Early America" is itself a condensed version in keeping with the Spirit of the Enlightenment. For all of its Christian curios—Archbishop John Carroll's chalice and paten, disguisable as a bell in an age of Catholic persecution, or his Declaration-signing brother Charles's home tabernacle, or George Whitfield's pulpit; for its Jewish relics, including the Torah of the Congregation Slearith Israel (founded in 1654) damaged during the revolution; for its smatterings of Mormon and Muslim and Native American artifacts; it seems less a memorial of the central role religion has played in the lives of Americans than a monument to the victory of the Spirit of the Enlightenment. There in the middle of room is the Washington Inaugural Bible, owned by St. John’s Lodge No. 1, Ancient York Masons.

Perhaps the curators and historians who designed this collection are in fact aware of all this; after all, the museum's exhibit on the presidency is extraordinarily nuanced and clear in its presentation.

On signs by either entrance, "Religion in Early America" is framed in these terms:

"Religious freedom is a fundamental principle of American life. While taken for granted today, its acceptance emerged only gradually in the nation's history. … Although most colonies had established churches that received state support, the framers of the Constitution and its Bill of Rights determined that the nation as a whole should not follow this precedent, but protect the free exercise of all religions…"

In a moment when religious freedom is under debate on all sides, in health care and in travel and the serious semantics of freedom of religion versus freedom of worship, of religion itself versus faith, it is perhaps not accurate to describe it as "taken for granted today." But at the same time, in the story told by the placement of "Religion in Early America," the small treasure room under the guard of Washington, god of democracy, that statement is certainly true. Beneath The Nation and within its limits religious freedom may be taken for granted. Like Rome before her, America can be magnanimous.