Strange Rites: New Religions for a Godless World, the excellent new book from author and theologian Tara Isabella Burton, begins with a rave. This review, to strike maximum contrast, begins with charts.

The demise of American religion is a much-discussed, and in some quarters bemoaned, phenomenon. "Three decades ago, America lost its religion," the Atlantic tells us; Pew says the "decline of Christianity continues at rapid pace." 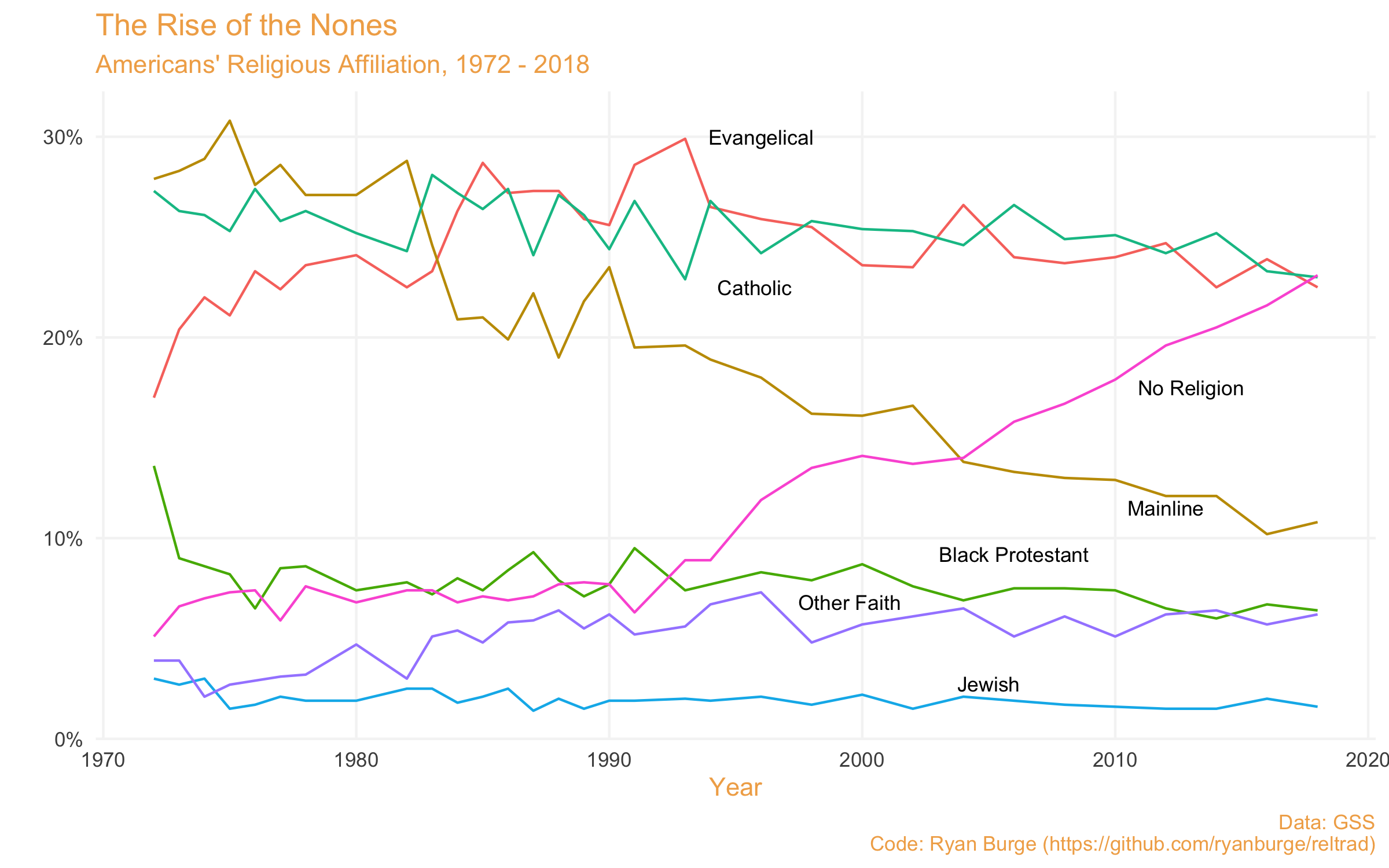 The data tell a similar story. "No religion" is the fastest growing religious affiliation in the United States; there are approximately as many irreligious Americans as there are Catholics and Evangelical Protestants. The Mainline Protestant churches, once the practice of the postwar American (white) majority, have been in conspicuous decline since at least the 1970s.

One could be forgiven for concluding, based on all this, that America has become a Godless nation. But other data militate against this conclusion.

Americans are more than twice as likely to engage in daily prayer as residents of similarly wealthy countries. An overwhelming majority believe in God (89 percent). Many of the "Nones," according to Burton, profess a belief in either "a higher power" (55 percent) or the God of the Abrahamic Bible (17 percent), 46 percent of believing Nones talk to God regularly, and 13 percent say that God talks back. 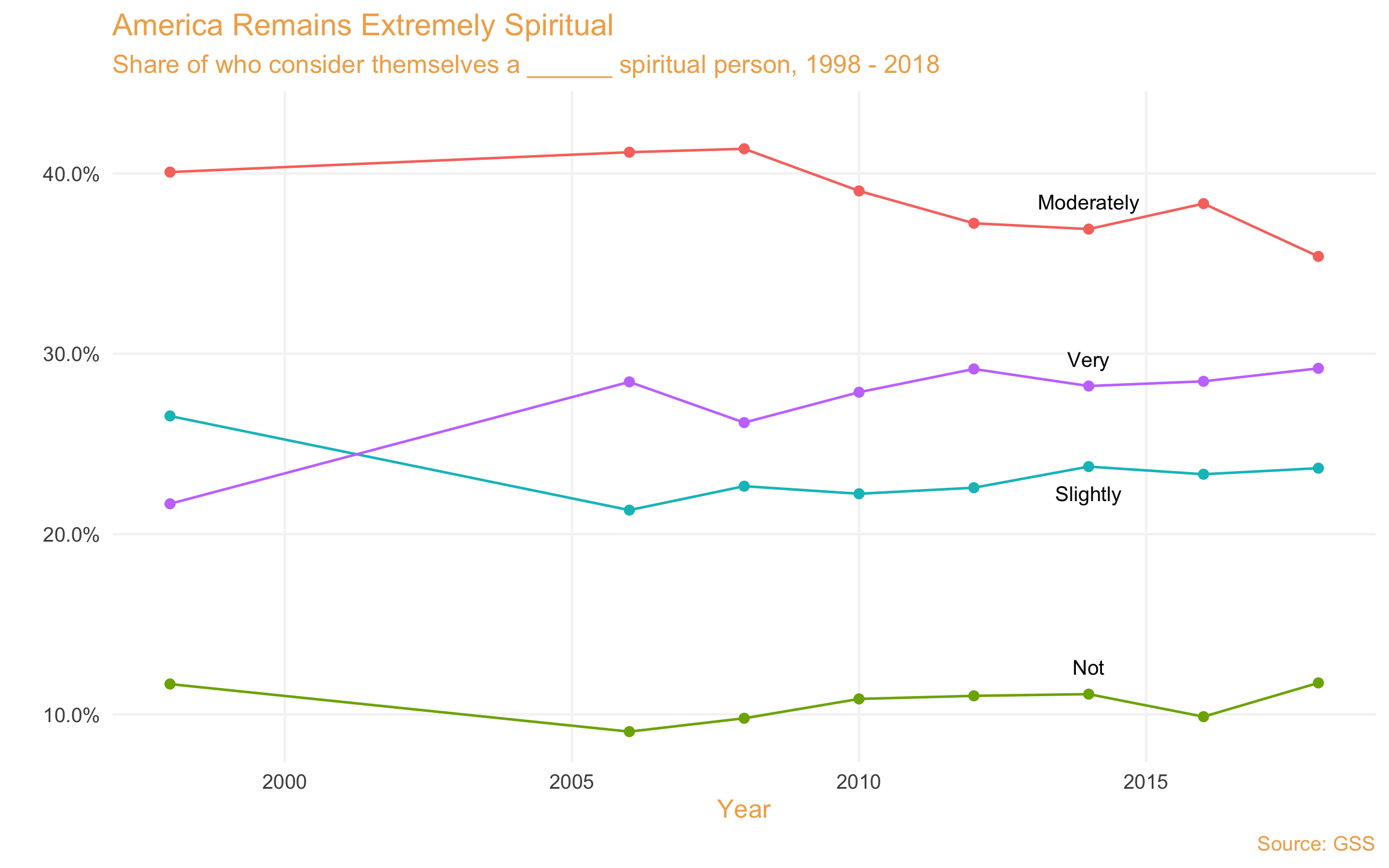 And then there's the nebulous concept of spirituality. As of 2018, 88 percent of Americans consider themselves to be at least slightly spiritual. The modal American is "moderately" spiritual, while 30 percent are "very" spiritual.

In other words, irreligiousness is the fastest growing affiliation in the United States, but Americans are by many measures of practice and belief still highly religious—measures that have remained flat as the Nones have surged. What gives?

"The story of the rise of the religious Nones in America," Burton writes, "isn't really about Nones at all." Rather, it's about a large cohort of unconnected but still religiously inclined people: the spiritual but not religious, the "faithful nones" who are unaffiliated but profess vague belief in a higher power, and the "religious hybrids," who officially profess one view while syncretically incorporating other beliefs.

Strange Rites is a book about the emergence of this new, "remixed" religiosity. It observes religions distinctly of and for the 21st century, whose practitioners want to craft their own bespoke devotions rather than adhere to those that dominated in the mid-20th century.

The book's middle section is given over to a discussion of some of these "remixes." There are Wicca adherents who curse President Donald Trump and Supreme Court Justice Brett Kavanaugh, "wellness" disciples who believe that through the right combination of pseudo-scientific juice cleanses and workout regimes they can become their best selves, and the new utopians of America's sexually liberated vanguard.

Threading these practices together is what Burton calls the American "intuitionist" religious tradition. By this, she broadly means the regular emergence throughout the nation's history of religious practices which prioritize the individual's access to religious truth over more institutional sources. Modern religious movements, Burton argues, focalize the religious search for meaning, purpose, and identity on the individual, disembedded from, and often in active opposition to, institutional infrastructure.

Of course, buying jade eggs from Goop and casting spells on Brett Kavanaugh do not a religion make. In some senses, these new spiritual practices permit syncretism because they do not make theological claims—it is possible to profess a half-hearted Christianity while also spending a lot of time at Soul Cycle, because Soul Cycle only asks that you add a little bit of hocus-pocus into your worldview.

In this sense, the new spiritualism about which Burton writes might be more intelligibly thought about as new enchantments—strange rites. New-age gobbledygook about auras and energies is less about fully formed theologies, and more about providing us with a supernatural method of interpreting the world around us.

But this is part of what makes Burton's exploration so interesting: the story of the rising Nones is told, by proponents and opponents alike, as the triumph of strict rationalism over religion. Burton's point is that actually, the America of 2020 still practices all sorts of irrational methods of knowing and making meaning in the world—we are not nearly so disenchanted as we thought.

But what about the new religions promised in the book's subtitle? Burton argues that these syncretic practices and methods of meaning are beginning to form into their own fully fledged institutions, albeit institutions defined by their anti-institutionalism. She names three: the "social justice" movement, the "California ideology" of Silicon Valley, and the atavism of the alt-right.

The last gets the most air time in Strange Rites, but it's the first that seems most relevant as the book is released. It is hard to see tens of thousands take to the streets in clear disregard of public health, to watch an assembled crowd raise their hands and chant a creed in unison, to observe certain words and even the act of kneeling take on an almost spiritual significance, and not conclude that there is something religious at work on the modern progressive left. The protest, after all, does not just move the political needle; it also offers the "collective effervescence" that pioneering sociologist Émile Durkeim saw as the fundamental religious experience.

"The social justice movement is so successful because it replicates the cornerstones of traditional religion—meaning, purpose, community, and ritual—in an internally cohesive way," Burton writes. "It takes the varied tenets of intuitionalism—its prioritization of the self, emotions, and identity, its New Thought–inflected suspicion of authority, its utopian vision of a better world born phoenix-like from the ashes of the old—and threads them together into a visionary narrative of political resistance and moral renewal."

To say that the progressive left is religious is not exactly a novel argument—anti-Communists on both sides of the Atlantic have said so for decades. It's not even, necessarily, a criticism. Insofar as Burton is correct that everyone still reasons supernaturally, to label something supernatural can no longer be a derogation.

But it does give us cause to worry about the power that this particular religion appears to wield in the public square. One report Burton cites suggests about 8 percent of the population are "progressive activists," yet the evidence of the past two weeks suggests they wield enormous influence in the board rooms of corporate America, the editorial boards of top publications, and across all levels of government.

Shows of fealty—blacking out a corporate logo or (inexplicably) donning kente cloth for a stage-managed photo op—are treated as political gestures. But insofar as they constitute participation in a religious symbolic order, they ought to be understood as religious in character, with all that implies about their prevalence in public life.

Religion has an ineluctable place in the public square—to ask someone to check their religious commitments at the door is a meaningless request. But the American tradition of self-governance turns also upon the possibility of religious pluralism, of each person's right to believe, or not believe, as he sees fit. To recognize something as a religion is to subject it to certain restraints; the strange new religions that seem so quickly to have spread merit no exception to this rule.

This is but one of many takeaways from Strange Rites, well worth the read for its religious history and careful examination of pop culture. But it is perhaps the most important: If America really is as religious as ever, our political survival begins with acknowledging that fact.