The Guggenheim Museum in New York City is selling ouija boards, tarot cards, and a beginner's guide to astrology "for the modern mystic." The occasion for such oddities in a prestigious art museum's gift shop is the Guggenheim's latest retrospective exhibit, Hilma af Klint: Paintings for the Future, which is open until April 23. The Guggenheim stipulates that the Swedish artist and spiritualist was the true pioneer of the peak abstract movement, which is normally attributed to Kandinsky or Mondrian. It is a fair argument: Af Klint (1862-1944) made radically abstract paintings a decade before Kandinsky strayed from representational work. But she left specific instructions that her paintings never be shown until 20 years after she died. The world wasn't ready for them—at least, that's what her spirit guides told her.

Af Klint attended the Royal Academy of Fine Arts in Stockholm from 1882-87, where she produced landscapes and portraits that she eventually would exhibit and sell. She joined "The Five," a group of women who conducted seances and communed with spirits to gain insight into the nature of existence. While in a trance, the women would conduct automatic drawings that were intimated by spirits. It was quite a departure from af Klint's days as a Sunday school teacher at her family farm.

The pivotal moment in af Klint's life (and posthumous career) came when the spirit she called Ananda—which some may recognize as the Sanskrit word for achieving ultimate happiness—called on the Five to produce paintings that illustrate the spirit world. Af Klint was the only one who accepted the task, calling it the "great commission." Her peers refused, saying that delving so far into the spiritual realm could lead to insanity. Af Klint began "The Paintings for the Temple" in 1906, saying she would dedicate a year to the project. Instead, it led to a series of 193 paintings and works on paper that wasn't complete until 1915. More than 170 of these paintings are displayed in the Guggenheim's winding rotunda.

The Guggenheim appears to make an effort to put weight behind af Klint's spirit guides. Senior curator Tracey Bashkoff writes that af Klint "envisioned her Paintings for the Temple filling a round building, where visitors would progress upward along a spiraling path, on a spiritual journey defined by her paintings." A round building with a spiraling path—that sounds an awful lot like the Guggenheim, which its architect Frank Lloyd Wright called "a temple of spirit." It couldn't be a coincidence, could it?

Whether coincidence or destiny, the paintings appear to belong in the space. Visitors will observe how af Klint's 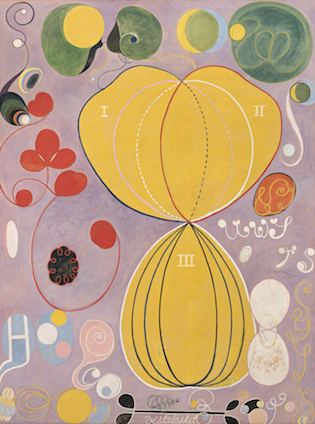 vision began to tighten its scope as they ascend toward her final works. "The Ten Largest," a group of 10 massive 10-foot-by-8-foot tempera paintings, introduces af Klint's dive into abstraction to illustrate the journey from childhood, to youth, to adulthood, to old age. Like her automatic sketches, these paintings share motifs of spirals, amoeba-like or botanical shapes, and geometric forms. But, despite their size, they do not achieve an overpowering result. They come across as decorative doodles on soft beds tinted with lavender, orange, blue, or dusty rose.

According to her own account, af Klint later began to interpret what her guides were showing her, rather than allowing herself to be possessed by free-flowing abstraction. This resulted in impressive, geometric paintings that effuse a sense of unity as well as dualism. Her compositions became more engaging as she used her familiar motifs with greater deliberation and intent.

The paintings are grouped into categories with ominous or portentous names: primordial chaos, the eros series, the seven pointed star, evolution, the tree of knowledge, the swan, the dove, and the altarpiece. Each group's paintings vibrate with exceptional use of color and esoteric, geometric equilibrium. But the three paintings for the altarpiece command the most attention. Two depict pyramids, one tipped upside down, topped by planet-like orbs of gold. The third shows what one may consider the view looking down from the peak of the pyramid, with a gold circle rimmed with black and spirals shooting from it.

If the paintings are meant to represent the "spirit world," then the spirit world must be founded on geometry. And, as spiritualism tends to be, every triangle or cube or spiral is rife with symbolism. Each color used is carefully chosen and defined by Theosophy, a once fashionable movement that posited colors as metaphors for the masculine, the feminine, the spiritual, etc. It is no wonder af Klint wanted her paintings to be shown 20 years after her death: If her spirit guides were telling her anything about the future, she would know that her oeuvre would be right at home with the 1960s' metaphor-driven hippies.

The question, however, remains: What was af Klint and her supposed spirit guides trying to tell us? The motifs of dualism between the masculine and feminine to the unwinding spiral are simple bromides about the nature of life. In the end, though, it doesn't matter: Most of the paintings are engaging, some are even stunning. When I left the museum, a line curled from the entrance, down Fifth Avenue, and around 88th Street. While it is doubtful the paintings will bestow the spiritual awakening af Klint intended, the trip to the Guggenheim will not be fruitless. Af Klint has been given her proper place in art's history, and she won't be forgotten soon.