Review: 'Michelangelo: Divine Draftsman and Designer' at the Metropolitan Museum of Art

"Let it be inscribed on the portals of the world's museums," Robert Hughes wrote. "What you will see in here is not meant to be a social experience. Shut up and use your eyes." This is precisely what the Metropolitan Museum of Art's latest colossal achievement, "Michelangelo: Divine Draftsman and Designer," demands. The exhibit, open until February 12, provides a behind-the-scenes look into the life of Michelangelo Buonarroti through his most intimate works—the incomplete, the first drafts, the drawings he made for his lovers—rendered in the most delicate mediums of chalk, ink, and graphite on paper. The show has been called an unprecedented, once-in-a-lifetime experience. And it is.

The 200 works, including 133 drawings, are set in dimmed rooms—any more light would damage the time-worn pieces. People are coming here to learn, which is exactly what the excellent curator and eminent art historian Carmen Bambach wants. She hopes her show will explain Michelangelo's expertise in disegno, a word comprising both drawing and design, and his terribilita, which she says describes "awesomeness" and "uncontainable energy." It is arranged in chronological order, which not only conveys the evolution of Michelangelo's art—it humanizes a legend by drawing our attention to his youngest aspirations.

Nearly 550 years after his death at 88 years old, Michelangelo proves he is still relevant. I came to the exhibit on a Saturday morning when the museum opened. It was already crowded, and most people asked the guides where the Michelangelo exhibit was. Once inside the darkened rooms, I found myself surrounded by mostly older couples and Europeans, and every now and then I would hear a comment about the work.

"Anatomically wobbly, that's how I feel sometimes," an old woman muttered in front of the Archers, a red chalk drawing whose many straining figures were so close to achieving three-dimensionality they could have toppled off the page. Michelangelo had such skill that those archers, and really any other subject of his drawings or doodles, looked like they were breathing.

He learned his craft the way any other artist does: By copying previous masters' works. He entered the workshop of the painter Domenico del Ghirlandaio as a bold and precocious 13-year-old and strived to do better than those before him. Even his copied work shows ambitious innovation, as you can see in his painting of Martin 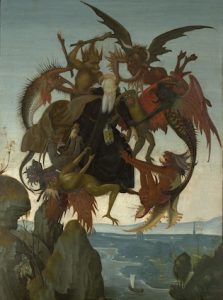 The Torment of Saint Anthony by Michelangelo / Metropolitan Museum of Art

Schongauer's engraving The Torment of St. Anthony. You'd never normally attribute such a captivating image to a 13-year-old, but this is, after all, Michelangelo. He inspirited Schongauer's work with bright colors and added his own imagined landscape background behind a web of twisting bodies, a motif that would be seen in works to come.

Sculpture was his favorite medium, but it was built on foundations of cross-hatching and stippling, drawing techniques he seemed to absorb and churn out with well-tuned expertise. The show displays figure studies taken from familiar works by Florentine masters Massacio, Giotto, and Donatello. They show a proficient hand—almost too proficient. According to Bambach, Michelangelo edited his oeuvre so his followers would see him as starting from a point of extraordinary competence: not too good to be unbelievable, but certainly beyond that of an apprentice.

With a finger held inches before various drawings, a 20-year-old art student traced Michelangelo's line work in the air.

"Crazy we can still learn from him," the student said.

Those drawings are attributed to a 17-year-old Michelangelo, but it was only four years later that he sculpted Young Archer in Carrara marble. It is seen next to works by the man who taught him the craft, Bertoldo di Giovanni, a student of Donatello who later became a curator of art at the garden of Lorenzo de Medici. Michelangelo's swift grasp of sculpture was shocking and quickly caught the eye of the Medicis. The powerful Florentine family housed him for four years. Michelangelo's belief in a Florentine republic maintained his relationship with them even after their exile. Indeed, their funding fueled his career in its fruitful beginnings. A decade after the Young Archer came the David, sculpted from a single block of marble, which escalated him to being the most sought-after artist in Italy. 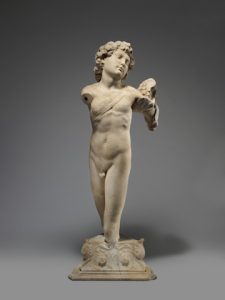 The Young Archer by Michelangelo / Metropolitan Museum of Art

The exhibit shows us that more than any artist, Michelangelo left his mark on Florence and Rome—the cities still rely on money brought in by tourists who want to see his work. The Met has displayed various designs for the San Lorenzo cathedral in Florence and the tomb for Pope Julius II in Rome. Even more intriguing are the abandoned designs, the ones that show ghosts of his many unfulfilled architectural designs, including a complete revision of the Capitoline Hill and Palazzo Farnese. The story of his famed rivalry with Leonardo da Vinci, 23 years his senior, is also seen in the unfinished works. A newly elected Florentine statesman hired them both to paint opposing walls of the Great Council Hall of the Palazzo della Signoria, Florence. Michelangelo was to paint the Battle of Cascina, while Leonardo was assigned the Battle of Anghiari, both historic Florentine victories. Neither work was completed, but a fragment of Michelangelo's composition was painted in 1540 by Bastiano da Sangallo, and it shows a web of naked, muscled men—always Michelangelo's unwavering favorite subject.

The Sistine Chapel ceiling is replicated in screen form, hanging above preparatory studies for several of its characters. Faces were upturned, mouths agape, arms gesturing here and there from one Genesis scene to the next. Going to the Sistine Chapel nowadays is entering a war zone of selfie sticks, so this is the next best thing.

Michelangelo hated this assignment—"drudgery" he called it. In a sonnet to a friend, he said the process had given him a goiter, along with some other descriptive remarks. "My beard points up, my memory hangs down under my balls," he wrote. His face was spattered with paint, his back permanently curved. "Come rescue my dead painting, and my honor," he added. "This place is wrong for me, I am no painter."

Pretty much everyone who has seen the most famous ceiling in the world would be hard-pressed to call it a "dead painting." If anything, it is famously overpowering—the manifest of his terribilita. I've heard some people scoff at Michelangelo for not venturing into oil paints, but painting buon fresco is exceedingly difficult: The paint must be applied to the plaster while it is still damp and before it dries, and even when the paint dries, it can be a very different color than expected. He also, of course, was painting while lying down. Whether or not people understood the technical mastery needed for this work, there was only a soft murmur throughout the crowd as they glanced with awe from the sketches back to the ceiling and read the wall texts. Now that galleries have begun to appeal to social media hordes, it is refreshing to see an audience give Michelangelo's drawings what they demand: reverence. 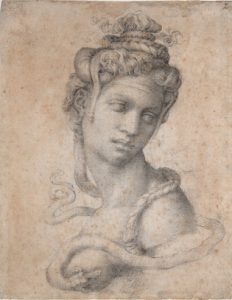 That was most prevalent when looking at my favorite images in the show: the "divine heads" Michelangelo gave his friends. The tenderly wrought faces rest like smoke on the page. The largest is of a young male, Andrea Quaratesi, one of the many noble youths Michelangelo considered his lover. It depicts a young man with cherubic cheeks and plump lips who nearly locks eyes with his viewers'. Michelangelo rendered him with more detail than any of his other drawings, a mark of his own feelings towards the subject. But I found the most captivating was of Cleopatra, a face of such beauty that I saw two people moved to tears.

Perish the thought that these images ever fade past recognition, but they inevitably will. They prove that each step of Michelangelo's aspiration was grounded in creating something beautiful. They give a personal taste of his creative energy, his acerbic wit, his willingness to teach others what he knew. Before I left the exhibit, I returned to the Cleopatra portrait one more time, hoping to seal the soft, carefully hewn features in my memory. When I tore myself away, I found myself in a noticeably denser crowd. A line had begun snaking to the entrance, visitors slowly moving into the show, ready to see the work of a divine genius.