'The work … is no longer viable'

The Kevin Spacey Foundation, where the disgraced actor worked hands on with young emerging artists, is shutting down in the United Kingdom.

Variety first reported the news, which appeared on the foundation's website. Spacey had already been removed from the foundation's board of directors last fall, shortly after allegations against Spacey for sexual misconduct with young men began emerging.

Prior to shutting down, the U.K. trustees were asked by Britain's charities commission to assure that "safeguards were in place to protect young people participating in the foundation's programs."

"The Trustees have reached the conclusion that the work of the Kevin Spacey Foundation UK is no longer viable and as such the Foundation will be closing on the 28 February 2018," the foundation's website now states. "The Trustees would like to thank all their partners, artists and organisations for the great work that has been done in association with the Foundation."

"The Trustees hope that the objects of the charity will be taken forward by other organisations," they said.

The foundation's website has been dramatically altered since the Washington Free Beacon first began inquiring about the foundation's future after the actor Anthony Rapp accused Spacey of making sexual advances toward him when he was just 14 years old.

The website briefly shut down as more and more allegations of sexual misconduct poured in last November. The foundation resurfaced online, but its website was notably missing photographs of the actor surrounded by young actors. 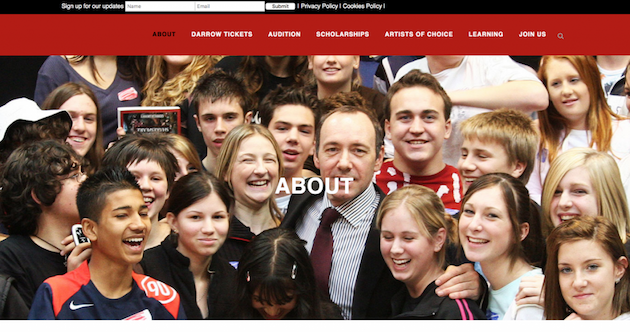 All of the content of the website has since been removed, including financial reports, pages highlighting grant recipients, and YouTube videos advertising Spacey's work with young adults have been deleted.

Spacey founded the nonprofit in London in 2010 to "offer a support system to emerging artists and young people." He expanded the group to the United States, offering grant opportunities to "school children, young people and emerging artists in the performing arts and film."

By 2015, the actor was personally holding auditions with 1,200 young artists through the foundation. That year the U.S. chapter of the group brought in roughly $1.5 million in contributions and paid out $721,388 in grants.

Spacey ran the foundation with the actor Nathan Darrow, a costar from House of Cards who spoke of the "flirty bond" he had with Spacey on set.

"I enjoyed it all so much. Hell, I enjoyed flirting with him, I enjoyed when he gave me dirty looks, or gave me the business, or almost fired me," Darrow said in a 2016 interview about playing secret service agent Edward Meechum on the hit Netflix series. Netflix has since parted ways with Spacey for its final season.

Spacey was also dropped from All the Money In the World, replaced by Christopher Plummer after the film had already completed shooting due to the growing list of sexual misconduct allegations.

The Old Vic Theater in London, where Spacey had served as artistic director for over a decade, reported that it received 20 complaints against Spacey for inappropriate sexual behavior. One actor who worked at the theater said Spacey "routinely preyed" on young men.

Spacey notes on his website that he worked to revitalize the Old Vic to "bring theatre to a wider, younger and more diverse audience."

Scotland Yard has three open investigations into sexual assault allegations against Spacey as well, including an incident involving an "aspiring actor who sought career advice" from the Oscar winner.