Matthew Cobos, a young U.S. Army soldier, is being hailed as a hero for his actions during the shooting in Las Vegas last Sunday.

An image went viral on the internet shortly after the shooting of a young man covering a woman with his body as the shots rang out. The man was lifting his hand to cover the woman's eyes to prevent her from seeing the scene around them. Shortly after the picture was taken, the two got up and ran off to safety.

The young man in the photo was Cobos, who afterwards, ran back towards the scene of the massacre to help others, the Daily Mail reports. 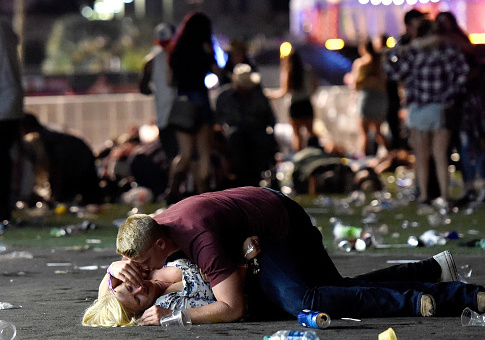 Cobos used his belt as a tourniquet to stop bleeding and even used his fingers to try to plug wounds. Cobos told family and friends that he could see the shots hitting the ground and ricocheting around him.

The young soldier is stationed with the Army in Hawaii where he is a cavalry scout. He was at the Route 91 Harvest Festival with his sister and her boyfriend during the shooting, and is for the time being back with his family in California.