The artwork, titled "Red, White, and Hillary Blue Diamonds," consists of five aluminum frames illuminated by LED lights. The diamond-shaped structures are installed in three locations, where they serve "as gateways into Georgetown."

The installations are "dedicated to former Senator Hillary Clinton, who is the beacon of dignity and guiding light, as a thank you for her strength as we move forward," according to a placard next to the art.

The diamonds are part of Georgetown GLOW, an exhibition of glowing art commissioned for the holiday season by the Georgetown Business Improvement District.

The Georgetown BID is a non-profit corporation that has taxing authority over local businesses and works to promote the area's commercial district. The GLOW exhibition was partially funded by a grant from the D.C. Commission on the Arts and Humanities.

The installation was created by Mina Cheon, a professor at the Maryland Institute College of Art, and Gabriel Kroiz, an architect and associate professor at Morgan State University.

Cheon told the Washington Free Beacon that she envisioned the Georgetown project before the November presidential election, when she thought Clinton would win.

"In December, we thought D.C. would have a kind of feel and we worked to capture that," Cheon said. "Because Hillary did lose, I think we wanted to thank her for her efforts and her work."

Cheon said the artwork honoring Clinton was intended to unify, not divide.

"We wanted to light the flag, not burn it," she said, pointing out that a majority of the diamonds glow red, while only one glows "Hillary blue."

This is not the artists' first foray into political art. Cheon is a pioneer of "POLIPOP," or political pop art. Her POLIPOP exhibition in 2012 explored East-West relations "through a postcolonial perspective." It also highlighted the Occupy Wall Street protest movement and dedicated a gallery to President Obama, "the polipop icon of our time." The gallery included a computer-generated painting of Obama and Cheon superimposed onto the body of Rosie the Riveter.

Cheon and Kroiz have collaborated on diamond installations in other cities. They used white diamonds in Seoul, South Korea, "to critique the cultural whiteness of modern Asian nations." In another Seoul venue, Cheon used the diamonds to make a point about "vapid cultural objects of late capitalism." 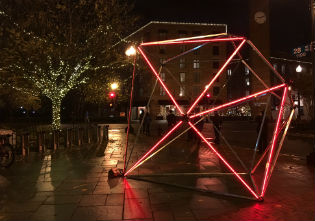 Some Georgetown locals have expressed displeasure with the diamond installation—and with Georgetown GLOW itself.

One resident with an extensive art history background offered a pointed assessment of the diamond installation.

"The first evening I saw it glowing red, I thought it was a portal to Hell. It looks like a satanic pentagram," said the resident.

The Washington Post reported that the GLOW exhibition "is not a huge hit with many shopkeepers," who would prefer their tax money go to traditional holiday decorations.

It is unclear how much public money was spent on the artwork honoring Clinton. A representative of the Georgetown BID did not answer questions about the project's funding.

"We don't control what the artists name their installations, nor can we—or would we want to—control the inspiration behind those pieces," said Lauren Boston, BID's communications director.

"Art is a protected form of expression under the First Amendment. Art is also subjective," Boston said.

Phone calls to the D.C. Commission on the Arts and Humanities, which provided a grant for the GLOW exhibition, were not answered.

Georgetown is one of the most elite neighborhoods in the nation's capital. Once home to John and Jackie Kennedy, today it boasts wealthy residents such as Secretary of State John Kerry and House Minority Leader Nancy Pelosi (D., Calif.).