In an upcoming episode of the Australian "60 Minutes," a 12-year-old transgender boy details how he began the transition to a become a girl, only to change his mind two years later.

As a young child, Patrick Mitchell had always wanted to be a girl, the Independent reported. "You wish you could just change everything about you, you just see any girl and you say, ‘I'd kill to be like that,'" Mitchell told interviewers.

After speaking with doctors, Mitchell was diagnosed with gender dysphoria and began taking estrogen hormones in anticipation of a full transition. Mitchell grew out his hair and the treatment caused the prepubescent boy to grow a pair of breasts.

When teachers began to call him a girl in class, however, Mitchell began to question if he made the correct decision. "I began to realize I was actually comfortable in my body. Every day I just felt better," he said.

"He looked me in the eye and said, ‘I'm just not sure that I am a girl,'" she told "60 Minutes." Mitchell has since stopped taking his estrogen treatment and plans to have surgery to remove the breast tissue.

Some studies have indicated that at least a portion of children who are diagnosed with gender dysphoria ultimately embrace the sex they were assigned at birth, New York Magazine reported. One study conducted by the Center of Expertise on Gender Dysphoria at VU University Medical Center, a famous gender clinic in Amsterdam, found that around two-thirds of gender dysphoric minors eventually desisted. That is, the minors ultimately reverted to identify with the gender corresponding with their birth sex. Another study, conducted in conjunction with Toronto's Centre for Addiction and Mental Health (CAMH), found 88 percent of male minors ultimately desisted.

Warren: We Need to Stop Putting Trans Women in Prison With Men 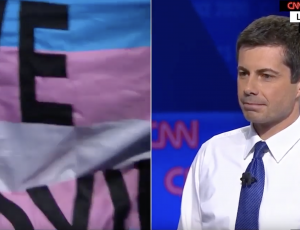