Column: What’s worse than rule by cronies? Rule by phonies

On Thursday the New York Times published a front-page, 1,400-word story on the political ambitions of a 26-year-old man who grew up in Ohio, graduated from Brown, married rich, and moved to New York City. And then moved to Garrison, New York, in the Hudson River Valley. And then moved to Shokan, New York, once it became clear that he couldn’t win the congressional seat in Garrison. And then, should he lose next year to incumbent Republican Chris Gibson, a local Army vet who won office in 2010, will almost certainly move again. Moving around is what district-shoppers do.

But the subject of the Times profile is no ordinary district shopper. He is Sean Eldridge, the husband of 29-year-old Facebook co-founder and Democratic donor Chris Hughes, whose net worth is somewhere in the ballpark of half-a-billion dollars. The two have been objects of media adulation for more than a year, ever since Hughes used the part of his fortune he hadn’t lost in failed business ventures to buy one of the world’s worst investments, the New Republic magazine.

The Times, for example, proclaimed Hughes and Eldridge "the new power brokers" in a lengthy profile so soft it turned into jelly. Another too-long profile, in New York magazine, concluded, un-ironically, that Hughes "seems happy to represent, to all of us, what a fantasy member of his never-not-wired generation could be—a savior from the future for the institutions of the past." In a short article appended to a photo-shoot of Hughes in the pages of the Times fashion supplement—Valentino Men’s coat, $2,880, sweater, $680, shirt, $650, and pants, $495; … Armando Cabral shoes, $545—Andrew Sullivan wrote wistfully, "He is seeking to make new what was recently seen as the very definition of old: paper, print, words, meaning. He is the young person’s idea of what a publisher should be." You can’t buy this sort of publicity.

Or maybe you can. It makes sense for a certain type of journalist to be on the good side of an insanely wealthy young man who spends lavishly; that journalist might work for him one day. But something larger also seems to be at work. Hughes and Eldridge have graduated to that rarefied level where liberal philanthropy and journalism and politics meet, that altitude high in the clouds where progressive reputations and motives become immune to ordinary skepticism and scrutiny.

It was not business acumen that took them there. Blessed by fortune to be Zuckerberg’s sophomore roommate, Hughes’ claim to fame was in inventing the Facebook "poke" button and promoting the site when it was in its infancy. Zuckerberg called him "Prada" after his taste in fashion. He followed his time at Facebook by working on the 2008 Obama campaign. After that, he launched Jumo, a failed website. We’re not talking about Steve Jobs here.

What we are talking about is the ascent of the premier social climber of our age, a man whose every utterance is a cliché, whose every action reflects the structure of power in Barack Obama’s America. The portrait sketched in the New York Times Thursday is of a couple for whom political influence is an entitlement; of liberal plutocrats detached from the people they claim to represent; of an attitude toward money in politics that is breathtaking in its naiveté. When we enter the universe of Hughes and Eldridge, we go beyond the simple conflation of financial and political interests. What they practice is not cronyism. It’s phonyism.

Sean Eldridge’s pursuit of office could not be more contrived. It began in 2010 when he and Hughes donated $250,000 to the pro-same-sex marriage group Freedom to Marry; Eldridge became political director. In 2011, he and Hughes purchased a $5-million estate in the Hudson River Valley. (They already owned a $5 million, 4,000-square-foot loft in Soho.) Their new neighbors included Jacob Weisberg and Roger Ailes. "Their property includes a former farmhouse built in the 1800s that was inhabited a century later by Vanderbilt Webb, a descendant of the industrialist Cornelius Vanderbilt, who held lavish society parties there with his wife, Aileen Osborn Webb, a patron of the arts," a reporter noted last year. Also in 2011, Eldridge founded Hudson River Ventures LLC, a "small business investment fund" that "works to empower entrepreneurs and build thriving businesses throughout the Hudson Valley," where Eldridge just happened to be thinking of running for Congress. 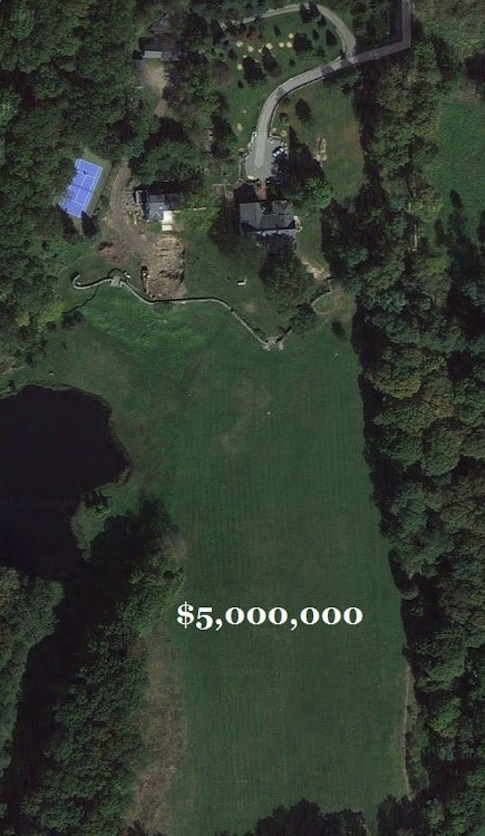 They stepped up their political giving. The two of them donated roughly $200,000 to Democrats in the 2012 cycle. Fundraisers for Kirsten Gillibrand and Tammy Baldwin were held in the Soho loft. Christine Quinn dropped by. Friends included Chuck Schumer and Nancy Pelosi. Hughes and Eldridge celebrated their wedding at Cipriani in New York City. It seems to have been quite the party. "Senator Schumer," New York magazine reported, "did his best Saturday Night Fever finger-point on the dance floor in full view of Zuckerberg, Sean Parker, Cory Booker, Gayle King, and Mo Rocca (who came as someone’s date)."

In March 2012, a few months before the wedding, Hughes bought the New Republic and installed himself as editor-in-chief. Do we really imagine that his sudden interest in journalism was unrelated to his husband’s political career? Changes to the editorial position of the magazine were as drastic as the changes to its design. For one thing, other than a hazy atmosphere of conventional Democratic Party liberalism, there no longer was an editorial position. Hughes eliminated the unsigned editorials at the front of the book.

The masthead was revamped. Richard Just, the talented editor with whom Hughes had negotiated the magazine’s sale, was ousted in favor of soccer enthusiast Franklin Foer, who had resigned some years earlier after a journalistic scandal. The masthead was cleansed; victims included Charles Krauthammer and Peter Beinart. The immortal Stanley Kaufmann was exiled to the web. The magazine turned into a bi-weekly GQ, minus the clothes and with some professors in the back. Feature-length journalism replaced provocative argument. The book reviews competed for space with flashy graphics and blurry type. But then Hughes never said he was interested in maintaining the money-losing, circulation-hemorrhaging New Republic. What interested Hughes, he said, was the ability to "convene conversations."

The phrase held significance despite its pretentiousness. When Democrats "convene" conversations, the conversations all seem to go in one direction. Whether the topic is guns or racial politics or abortion, "let’s have a conversation" has become another way of saying, "let me give you an opportunity to agree with me." Not only is "conversation" a softer noun than "debate"; it is also more evasive, insidious. There are rules and logic to debates. Debates have clear winners and losers. "Conversations" are more ephemeral, vaporous, and atmospheric; they meander and flux. They are grounded in emotional appeals.

Such is the conversation Eldridge and Hughes convened when they launched Protect Our Democracy in 2012. The group called for public financing of elections in New York. Like many campaign reforms, those advocated by Protect Our Democracy would not prevent individual candidates from spending their own money on campaigns. Campaign finance reform thus gives an edge to the super-wealthy and their spouses—people just like Chris Hughes and Sean Eldridge. And yet somehow Hughes and Eldridge’s attitude toward money in politics has not been complicated or compromised by the fact that nowhere do they seek to constrain or curtail the spending of their money in politics.

Nor is this the only irony lost on the couple. Speaking to the Times in 2012, Eldridge said that the estate in Garrison is where "we put down roots, where we want to have a family." The Times added, "The community reminded him of Toledo, Ohio, he said, where he grew up playing outside and visiting neighbors unfettered." Yeah, well, it was nice while it lasted. In January of this year, after Hughes and Eldridge determined that the Garrison congressional district probably was unattainable for a rich twenty-something liberal activist from Ohio, they bought a $2 million mansion in "the neighboring district on the other side of the Hudson River." There are new roots to put down; new neighbors to visit unfettered. 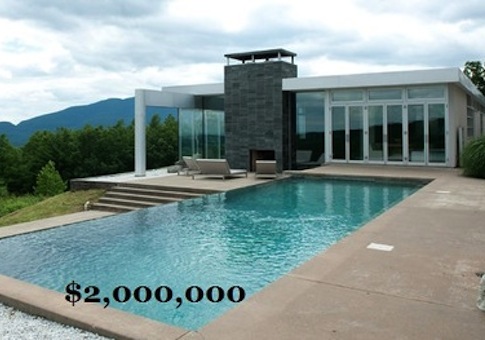 January 2013 was a busy month for Hughes and Eldridge. Not only did they buy the new house, they attended President Obama’s inauguration—that’s them on the left—and financed, together with George Soros’ son Jonathan, a winning independent expenditure campaign to bolster the New York Democrats’ numbers in the state senate. January was also the debut of the Hughes Republic. The magazine reportedly worked with SKD Knickerbocker, the public relations firm that employs former White House communications director Anita Dunn, to coordinate publicity for the launch and help arrange a cover-story interview with President Obama. The interview was notable because both Foer and Hughes conducted it. Hughes’ questions were insipid—"You spoke last summer about your election potentially breaking the fever of the Republicans. The hope being that, once you were reelected, they would seek to do more than just block your presidency. Do you feel that you’ve made headway on that?" But they were not any more insipid than one would expect, considering it was a campaign contributor who was asking them.

The SKD Knickerbocker connection was important. Eldridge filed his campaign papers shortly after they moved to the third house. He filed his voting registration papers around the same time, but they were returned because the new mansion lacked a mailbox. (He’s since fixed the problem.) When Hudson River Ventures also swapped districts, SKDK began promoting some of the investments Eldridge was making in the community. "Since late last year," the Times reports, "the firm has provided at least $800,000 in loans to businesses in the district, including Bread Alone bakery and Prohibition Distillery. And Mr. Eldridge has dug into his own pocket, donating $250,000 to a $1 million effort in the district to build a 3-D printing technology center at SUNY New Paltz." But is the pocket into which Mr. Eldridge is digging really his own?

Fundraising is not an issue. The Times notes that Eldridge raised some $300,000 in the first quarter of 2013, though almost all of it came from out of state. In May of this year, we learned that Hughes had become a member of the Democracy Alliance, the secret group of liberal donors organized by George Soros who funnel undisclosed money to progressive institutions and candidates. Hughes attended its spring retreat at an exclusive resort in Laguna Beach, California. And while there may be no way of knowing whether the Alliance has selected Eldridge’s campaign as one of its priorities, we do know that the race to represent New York’s Nineteenth Congressional District has become a beautiful metaphor for the fraught influence of progressive wealth in American politics.

Eldridge recently spoke to some Hudson River locals. "He seemed pretty friendly," a local Republican told the Times. "Then I found out he was running against Congressman Gibson and I thought that this was all a little bit of a staged situation." A little bit? Politics in America more and more has come to resemble a "staged situation," a stage on which no one can stop the union of money and political correctness, where millions upon millions are spent furthering an agenda utterly foreign to the concerns of ordinary Americans, where the only obstacle for those who marry into the caste is their own transparent phoniness.