A Fordham University student kicked off campus for posing with his legally owned firearm filed a lawsuit on July 23 alleging the school violated its commitment to free expression.

Rising senior Austin Tong, a Chinese immigrant who posted the picture in honor of the 1989 Tiananmen Square massacre, filed a lawsuit against Fordham, the school's president, and the dean of students. The suit alleges the university violated its free expression covenant with students by disciplining Tong for "lawful, constitutionally protected, and non-threatening social media posts on Instagram."

"Fordham's policies and rules, as well as basic First Amendment jurisprudence, make it abundantly clear that uncomfortable or unpleasant impact on a speaker's audience is not a proper ground to restrain the speech in question," the lawsuit reads.

The suit calls on the school to annul all disciplinary sanctions, admit that Tong's social media posts are a permitted exercise of free speech under Fordham's speech code, and award relief for the breach of contract between Fordham and Tong.

In its mission statement, Fordham guarantees the freedom of inquiry among other freedoms, but the explicit promise of free speech can be found in the school's demonstration policy.

"Each member of the University has a right to freely express his or her positions and to work for their acceptance whether they assent to or dissent from existing situations in the University or society," the policy reads.

The lawsuit alleges the sanctions against Tong are "damaging and humiliating" for the student as well as "draconian." The disciplinary actions force Tong to choose between his beliefs and a degree from his university of choice.

"These sanctions have placed Tong in an untenable position," the lawsuit reads. "He must either (1) abandon his principled beliefs, forfeit his right to lawful expression, and submit to Fordham's unconscionable discipline, or (2) face suspension or expulsion from Fordham, which would severely damage his future academic and employment prospects."

Tong told the Washington Free Beacon he believed he had a good relationship with dean of students Keith Eldredge before posting his Instagram photos. "Not even a Chinese university would do this to their students," he said.

The university did not respond to multiple requests for comment.

"The end result is that Tong and other students who do not adhere to the political orthodoxy of Fordham's administrators are turned into outcasts," the lawsuit reads. "Other individuals who wish to speak out with potentially unpopular but good faith viewpoints are discouraged from exercising their right of free expression."

Tong's lawyer Brett Joshpe said he could not comment on the pending litigation, but said there will be additional claims for "the massive damages caused." 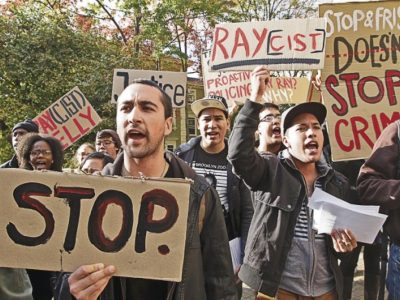