As the Fourth of July approached this year, there was an interesting bubble of press coverage that focused on the efforts of an Indiana-based nonprofit, Military With PTSD, to make available these signs across the country: 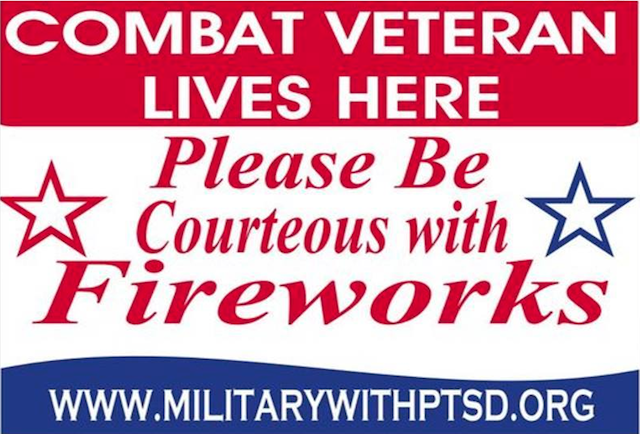 How widespread is this effort? The group’s distribution of signs reportedly began in 2014 (when it was covered by USA Today and other outlets) and has grown significantly more popular this year, with over 2,500 signs distributed and around 3,000 people on a waiting list as Independence Day approached, according to CNN. In terms of the total number of veterans out there in America, these numbers constitute a small fraction: the VA estimates that there are over 20 million vets living in America today. Among these men and women, the number of combat veterans—those who served in a combat zone during a time of war—will be lower, but will still number well into the millions.

So it may be that these signs are not a major phenomenon: Coverage in the press has a way of inflating the significance of trends. On the other hand, the group’s Facebook page has nearly 150,000 "likes"—not an enormous number, but not an insignificant one, either. From the perspective of media criticism, the coverage seems to rate somewhere right on the line between "fake trend" and "possibly the start of something."

That stipulated, it is certainly the case that the coverage has sparked a debate among veterans, much of it conducted in quiet tones among friends, considering the sensitivity of the subject matter. I first became aware of the issue through a June story in the Washington Post, in which the author, a journalist and Afghanistan veteran (and former Free Beacon intern) named Thomas Gibbons-Neff, solicited reactions on Twitter to the group’s distribution of signs.

These reactions were generally negative. Some commenters agreed with Gibbons-Neff that while the impulse behind the signs was understandable, perhaps it would be better to have a conversation with one’s neighbors, rather than putting up a vaguely standoffish notice in one’s yard. Others suggested that the sign unfairly and inaccurately lumped all "combat veterans" together in a group that was presumed to dislike fireworks. As one vet proposed:

@Tmgneff I'm making a new sign. "Infantry veteran lives here. Please bring me along to set off most dangerous fireworks."

Others went further, with one commenter suggesting that such a sign was "counter to everything we stood, fought for," though the tone of this response was an outlier. In general, the criticism was respectful and reserved, no doubt because anyone who finds the signs discomfiting is also aware of a population of veterans who suffer from severe PTSD, and for whom, in some cases, fireworks are a genuinely unwelcome reminder of past trauma. For evidence of this fact, look no further than Military With PTSD’s own Facebook page, which is replete with commenters telling harrowing stories of the negative effects suffered by them or their loved ones upon exposure to unanticipated pyrotechnics.

I count myself among those who find the signs off-putting. I can quite clearly imagine the distress of those who find themselves sensitive for years, if not for life, to things that remind them of incidents like IED strikes or indirect fire. Like most combat veterans, I have had my own tussles with post-traumatic stress, limited as it may have been: somewhat unusually for an infantry Marine of my generation, I had only one combat deployment—albeit quite a violent one, to Marjah in 2010—and there are many who deployed to combat in Iraq or Afghanistan four or five or more times.

Even so, upon my return from Afghanistan I exhibited the classic symptoms of hyper-vigilance. The experience of not having a firearm constantly on my person was regularly upsetting. I remember my heart beating overtime as a cold sweat broke out in reaction to entirely innocuous events, like being unable to find my leaf-blower in a messy garage on an otherwise still, perfect autumn Saturday morning. There were also moments that were, for lack of a better term, morally dark. I acted out, allowing my temper and other bad habits greater control over my actions, because in the back of my mind I nursed the irresponsible belief that I had earned the right to misbehave, because I had seen or done difficult things that others had not.

There were days that were, frankly, degrading. One winter evening, following a day’s required training in "Operational Stress Control and Relief"—essentially, talk-therapy training mandated by the Marine Corps—I found my vision blurring and my clammy hands shaking as I drove down a dark road in the back woods of Camp Lejeune in the direction of home. I had to pull over to the side of the road lest I hit a tree or an oncoming car, the headlights of which appeared like disorienting fractals in my eyes, which I kept blinking frantically in the hopes that my vision would clear up. Sitting on that shoulder, in one of the lower moments of my life, I scrambled to find a card in my wallet on which I had the number of the mother of one of my Marines who had been killed. She had attended the memorial service for the Battalion upon our return, and had been almost unbelievably gracious and graceful in her embrace of her son’s fellow Marines. In my panicked logic—the overall physical experience was similar to what I have heard described as the symptoms of a panic attack—I thought that if I could get through to her on the phone, she might be able to offer me some words of consolation or absolution that, at that moment, I decided I needed. I thank God to this day that she didn’t happen to pick up, and find herself confronted with being asked to carry yet another burden.

Then, slowly, things got better. Perhaps I am lucky in this regard, and I know that there are those who are not—some close friends of mine among them. Even so, I question the value of these signs and the broad implications that they seem to broadcast. While the signs might provide some benefit in shielding some veterans who are grievously affected by PTSD from unexpected noises, the manner in which they achieve this seems less than neighborly. Moreover, the signs contribute to an atmosphere of stigmatization. They quietly promote the inaccurate and harmful notion that combat veterans are a class of Americans who require careful handling, because otherwise we might be spooked, or angered, or driven to a violent overreaction. You never know what will make us flip out!

Helping to build higher such a wall between veterans and society is a great shame. This is not just a general concern. It applies to the individual veteran working with a lasting case of PTSD, too. While posting such a sign in the yard might achieve a short term benefit of getting one’s neighbors to give you advance warning of their pyrotechnics, it is also just as likely that such a display will isolate the veteran from his immediate community, in a way that a series of friendly chats conducted with the same purpose would not.

There are hidden dangers for veterans to be found in joining the many groups making ostentatious demands for environments safe from hurtful stimuli in our country. There is a hidden cost to society, too, because veterans have so much to offer their country, especially if they have seen combat. There is a special kind of wisdom made available to such a man or woman that America is desperately in need of today. Its beginnings can be found in the veteran’s appreciation for the modest things in life. When I was a boy, my dad—a World War II veteran who was sent to North Africa in 1943, and told he could come home when the war was won—never took me camping. He had spent years, as he put it, sleeping in the mud, and had no desire to continue once the experience became optional. Now I get it. I don't mind the outdoors quite as much as he did, but following my time in the infantry, I rarely fail to appreciate simple pleasures: a bed. A roof when it is raining. A good night's sleep. A full meal. The person I love next to me. I take few things for granted anymore—as is the case for most veterans.

This special wisdom can also be found in more profound matters. The veteran knows that war can damage you, but that it can also improve you. The improvement works like this: nothing happens on the battlefield that does not happen back here at home. Death, pain, the loss of those close to you; courage and cowardice; victory and defeat; loyalty, love and—once in a while—betrayal. The difference, of course, is that on the battlefield it all happens much faster and the experience is therefore much more intense. Here at home, in wealthy, comfortable, modern America, we can go for long stretches ignoring these dramatic aspects of life—but not, in the end, escaping them. We will—all of us—die, and almost all of us will suffer the experience of losing people we love. We will be brave sometimes, and not at other times, and we will be impressed or disappointed by the bravery or cowardice of those upon whom we depend. We will win and we will lose.

The battlefield gives the veteran intimate experience of all of these things. It is thus a source of wisdom. This is the "strength" that veterans bring back home with them to America, both as individuals and as people who participate in civic life. Their strength is their wisdom: their knowledge of a hard world outside of our prosperous communities, and their intimate knowledge of the good and the evil aspects of the human condition.

One of the great benefits that veterans can provide to American society at large is the perspective and resilience gained from these experiences, even—or perhaps especially—if the warp-speed exposure to these experiences has left a mark, even a lasting or painful mark. I am much more healthy now than I was a few years ago, because the metronome of my body and soul has had time to slow and recalibrate itself with the pace of peacetime existence. But I have no desire to let go of the grief I still feel about those I served alongside who died or were grievously wounded. It would be a betrayal.

I find no contradiction between feeling this way while still agreeing strongly with James Mattis, who recently told a gathering of veterans:

For today I feel sorry for those who were not there with us when trouble loomed. I sometimes wonder how to embrace those who were not with us, those who were not so fortunate to discover what we were privileged to learn when we were receiving our Masters and Ph.D.s in how to live life, and gaining the understanding and appreciation of small things that we would otherwise have never known.

So let’s not wall ourselves off from our neighbors with signs that imply—intentionally or not—that civic life needs to adjust to us, or else. Next Independence Day, if fireworks pose a concern, let’s talk to our neighbors, or even try to set some off together with them in the street. Veterans, especially those who have some experience of trauma, have so much to offer their communities, and there is much that full participation in the life of their communities can do for them. All of this will get off to a better start with a neighborly chat, not with a sign.

The Taliban Wants the World’s ‘Mercy and Compassion’