Memories Pizza? OR THE ILLUMINATI?

Let me tell you a story.

Once upon a time there was a pizza parlor in a small town that no one had ever heard of. This small town happened to reside in a state that passed a law protecting religious freedom—a law opponents said was simply a tool of discrimination against gay people. The problem with that argument is that there was no actual discrimination taking place. So news crews, desperate for video in a time when there's nothing terribly important going on in the world, scoured the countryside for evil bigots chomping at the bit to oppress some homosexuals.

And, lo, a news crew found some such bigots: the aforementioned pizza parlor in a small town that no one had heard of. When ambushed by a TV crew, one of the owners said that they'd be happy to serve gay people their food but would not cater a gay wedding, as they were a "Christian business." A bigot uncovered, the news almost instantly went viral: their Yelp page was defaced, death threats were proffered, and school teachers decided to go all Do the Right Thing on them.

Their store's reputation in ruins, the owners of this small business decided to shut down for a week. Thanks to the death threats, they said they might not open ever again. And then the donations started pouring in: a national media personality they had never dealt with before highlighted their plight, and $5 and $10 at a time, the money flowed. Eventually they had raised almost a quarter of a million dollars from people who were disgusted that the outrage mongers pounced on someone who didn't understand that they're supposed to keep their religious beliefs to themselves.

But let me tell you what really happened.

Once upon a time there was an evil pizzeria that catered to the lowest form of religious bigotry. They waited for years, opening the store almost a decade ago. They knew that the gays were coming. And they wanted to put a stop to it. Or, at least, to capitalize financially off of it. And when Indiana passed its RFRA law, they saw their chance.

Oh, sure, we think that the local news reporter "just happened" to drive some 20 miles to find a pizza joint that was itching to deny service to gay people. But that's a pretty big coincidence, don't you think? How do we know she didn't get an anonymous tip? How do we know that this reporter wasn't in on the con? Simple answer: we don't. OPEN YOUR EYES, SHEEPLE. CONNECT THE DOTS.

So then the reporter airs her report, the headline of which very misleadingly suggests the pizza joint would never want to serve gay people their delicious pies. (Was this sloppiness or intentional misdirection designed to gin up outrage—and thus a money-making backlash to the outrage? You decide.) There was much anger as entirely just warriors for goodness suggested we calmly burn the witch and her family's business to the ground and others made death threats. Their Yelp page was defaced by good people doing good work. These bigots were named and shamed, called out and ruined!

But here's where the really devious part of the grift kicked in. It was all a con. A con designed to rake in money from similarly minded bigots, of which there is no end in America. And the con worked! The family made hundreds of thousands of dollars via Go Fund Me.

Fortunately, while all you idiots were blind to what was happening, one-time VJ Dave Holmes knew exactly what was going on: 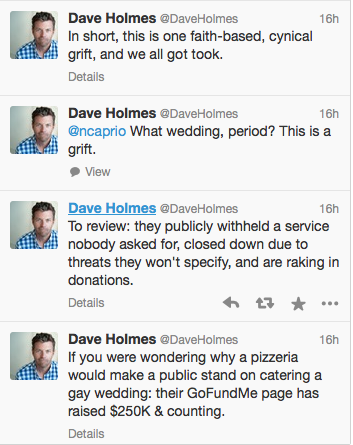 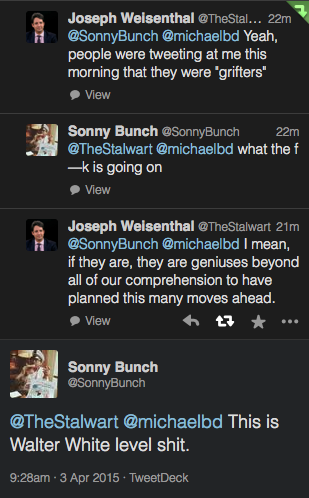 *Truth: IT ISN'T. You people have no idea how deep this rabbit hole goes.

The Ingrates of Vienna